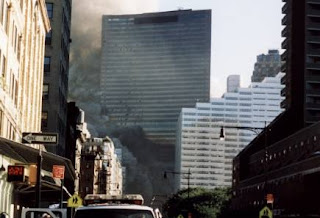 Paul Joseph Watson at Prison Planet has some explosive news from the controlled demolition of World Trade Center Building 7 on September 11, 2001. His headline reads "Ground Zero EMT: We Were Told Building 7 Was to Be 'Pulled'" and in addition to the headline news, he provides the following:

A New Jersey EMT has gone public on how emergency workers were told that Building 7 was going to be "pulled," before a 20 second demolition countdown broadcast over radio preceded its collapse. The ground zero rescue worker also blows the whistle on how he witnessed multiple underground support columns of the WTC towers that had been severed before the buildings imploded.

In a letter to Loose Change producer Dylan Avery, the individual who wishes to remain anonymous refering to himself only as Mike, 30, NJ, describes how he has repeatedly tried to alert numerous authorities to what he saw on 9/11 but was ignored or told to "shut up" on every occasion, and ultimately fired for disorderly conduct.

The EMT now dismisses the official government explanation of events and slams the 9/11 commission as a "whitewash."

Unless I am much mistaken, this is more detail than we've ever had about this particular aspect of that spectacularly absurd day:

"There were explosions. There were flashes. There was molten metal running down the I-beams of the basement levels like lava flows. I've never seen anything like it. Yes, planes hit the buildings - anybody who says otherwise is a moron. But the explosions - the rapid, symmetrical, sequential explosions - they happened," states 'Mike'.

He explains how he and others were in the basement of one of the towers helping injured victims when he saw "One of the huge steel and concrete support pillars with an 8 foot section blown out of the center of it." Looking around, Mike saw other support columns that were in the same condition, prompting rescue personal to ask "how could someone have rigged all these explosives?"

"We stood outside listening to the explosions," states Mike, "One after the other, every minute or so. At one point, about 10 minutes before the first collapse, a 30 foot or so section of the courtyard exploded straight up into the air. Just before the collapses, a series of deep, below ground explosions, then numerous explosions in the buildings upper floors. Then we ran. We felt the same deep explosions before the second collapse. This was not just the planes."

The rescue worker concludes emphatically, "The buildings were rigged, there is no question about it."

There's a lot more. Why haven't we heard it before?

It's a story people don't want Mike to tell, for his own good:

Following the attacks, Mike made a sustained effort to inform the relevant authorities of what he saw, including the FDNY, the NYPD, newspapers and television networks. In every case he was told to "shut up", "forget about it", or "let it go, for my own good."

Initially praised as heroes, when Mike and his colleague tried to to alert their EMT Coordinator In Charge of what they had witnessed, they were brought up on charges of disorderly conduct, fired, and fined for damaged uniforms and equipment they had used on 9/11. Two other colleagues who witnessed the same events now refuse to even acknowledge they were at ground zero for fear of reprisals.

Click this link. Read the story. Think it all out for yourself. What does it mean? And perhaps even more importantly, is it real? Or is it deliberate disinformation to discredit Loose Change? Do we have anything to corroborate this except Dylan says he got a letter and this is what it says? Or in other words, what's up?

Stay tuned this is gonna get even more interesting.

"Interesting times", as the Chinese say.

"May you live in interesting times!"

File under: 9/11
Email ThisBlogThis!Share to TwitterShare to FacebookShare to Pinterest
Posted by Winter Patriot