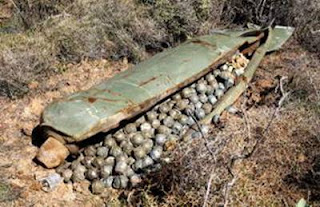 All the civilized countries of the world have voted for a ban on cluster bombs. But -- big surprise -- the US was not among them!

More than 100 countries reached agreement Wednesday to ban cluster bombs, controversial weapons that human rights groups deplore but that the United States, which did not join the ban, calls an integral, legitimate part of its arsenal.

The weapons consist of canisters packed with small bombs, or "bomblets," that spread over a large area when a canister is dropped from a plane or fired from the ground. While the bomblets are designed to explode on impact, they frequently do not. Civilians, particularly children, are often maimed or killed when they pick up unexploded bombs, sometimes years later.

Navy Cmdr. Bob Mehal, a Pentagon spokesman, [said] "cluster munitions have demonstrated military utility, and their elimination from U.S. stockpiles would put the lives of our soldiers and those of our coalition partners at risk."

Of course it's much better -- and much more legitimate -- to put the lives of innocent civilians at risk, while we wage illegitimate wars with so-called legitimate weapons.

Along with the USA, Russia, China, India, Pakistan, and Israel also refused to sign the agreement.

It is becoming increasingly difficult not to believe that the world would be a better place if all six were reduced to ashes.
Email ThisBlogThis!Share to TwitterShare to FacebookShare to Pinterest
Posted by Winter Patriot