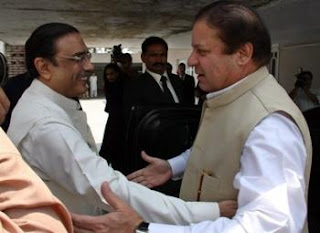 The eyes of the world will be on Denver this week as the Democratic party goes even further through the looking glass than anyone could have expected who wasn't paying attention all along.

Obama-Biden/2008: It's a world-class train wreck in agonizingly slow motion, and if that's not enough for you, there's another agonizing new disaster slowly unfolding in Georgia.

These of course are in addition to all the other disasters slowly unfolding in the rest of the world, most of which were already there three weeks ago.

But things are happening very quickly in Pakistan, where the governing coalition is coming apart, even as I write.

On the other hand, the eventual result of this "unpredictable crisis" appears to be well mapped out, and favorable to Americans of the elite policy-making persuasion.

It's funny how things work out in your favor once you start gaming the system.

The men at the center of the Pakistani drama are Asif Ali Zardari and Nawaz Sharif.

Zardari [on the left in the photo above] is the widower of slain former Prime Minister Benazir Bhutto who now leads the PPP, the Pakistan People's Party.

Sharif [on the right in the same photo], a former Prime Minister, leads the PML-N, one branch of the fractured Pakistan Muslim League. The other branch, PML-Q, supported former president Pervez Musharraf, who resigned last week rather than face impeachment charges.

Prior to his resignation, Musharraf made a series of moves designed to strengthen his position. He dismissed the Chief Justice of the Supreme Court after some court rulings displeased him. When that didn't work, he declared a state of emergency, sacked all the judges who displeased him, and kept them under house arrest. He used the Army and the Police to oppress his political opponents. He even changed the Constitution to give himself more power, adding a 17th Amendment which gives the President the power to dissolve the Parliament.

In a true parliamentary government, the power to dissolve the parliament rests with the Prime Minister for a very good reason.

A Prime Minister holds his position at the pleasure of the parliament he leads. If he dissolves it, there will be another election, and the winners of that election will determine who becomes the next Prime Minister.

So no Prime Minister can dissolve the parliament except at the cost of his job -- which he may lose permanently, depending on what happens in the election.

But a President needn't have any such qualms if he can dissolve the parliament, forcing another election, without losing his position. In this case the dissolution of parliament becomes a political weapon of choice, rather than a last resort.

In the most recent parliamentary elections, all the moderate opposition parties did well, especially the PPP and the PML-N.

These parties formed an anti-Musharraf coalition, nominally led by the most successful opposition party, the PPP. But the opposition parties had very different platforms.

Specifically, the PML-N had pledged to reinstate the judges, whereas the PPP had made no such promise. PPP in fact resisted the reinstatement of the judiciary, on the grounds that this might provoke a backlash from Musharraf.

So the PML-N agreed to help PPP to get rid of Musharraf, and in return the PPP promised that when Musharraf was gone they would support PML-N on reinstatement of the judges.

But Zardari never intended to do that, and he still doesn't, and now that Musharraf is gone, he's been forced into a corner where he has no option other than making his position clear. And his position is an ugly one ... but it's politically strong.

Zardari is supported by the Americans (very quietly, now that his wife has been killed) and by the PPP, which for historical reasons is the strongest of the opposition parties, even though it no longer represents true opposition.

But Zardari himself has no experience in politics, unless you count raking in enormous amounts of cash as a military procurement officer while his late wife, Benazir Bhutto, was Prime Minister.

And he's a free man in Pakistan only because of a "reconciliation" agreement promulgated by Musharraf, granting him immunity from corruption charges so he could participate in Pakistani politics in the wake of the assassination of his late wife, Benazir Bhutto.

Benzair Bhutto had been a free woman in Pakistan only because of a "reconciliation" agreement promulgated by Musharraf, granting her immunity from corruption charges so she could participate in Pakistani politics in the wake of Musharraf's dismemberment.

As for Musharraf, he was was torn apart on the rack of American foreign policy, where rogue allies play dangerous double games.

I'm still working on this post but in view of the breaking news I have decided to post it early.

I will continue to update it as frequently as possible, subject to work and other constraints.

For more background see my most recent post on this subject:

Pakistan After Musharraf: Same As It Ever Was, Only A Bit More So; Kinda Like What We Have Here, But Different