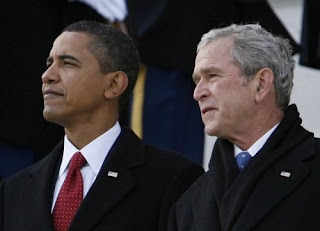 Our new transformative president Obama's decision to fight a court order requiring the release of photos depicting the well-documented abuse of detainees at Abu Ghraib -- while entirely in character for this transformative new administration -- is being widely described as shameful enough on its own, let alone for a president who portrayed himself as a champion of transparency and accountability in government.

But then again Obama was once a candidate and now he's a president. And when he was a candidate, certain people (like his former pastor, Jeremiah Wright) were portrayed as troublemakers and cast out of the national scene because they dared to point out that Obama was a politician!

Seriously! The campaign pretended the candidate was not a politician. How transparently false is that? Fortunately for Obama, he had to run against a man who was obviously certifiably insane, and a woman who was obviously even crazier. In that respect Obama's victory in the November election was more inevitable than remarkable. So what if he's part black? A green and blue guy could have won that election, if he was a half-decent politician.

And yet somehow it comes as a big surprise that the tales told by a politician when he was a candidate turn out to be false once he gets elected. Thus people are shocked and even mildly disappointed when their man, now in office, turns out to be somewhat different than he was portrayed during the campaign. When will we ever learn? I'll rephrase that: Will we ever learn?

Obama wants to suppress the photos even though their release is required by law, under the Freedom of Information Act [FOIA]. In his defense of his new position, Obama echoes Pentagon claims that the release of the photos would inflame our enemies and endanger our troops. And our old friends, Lindsey Graham and Joe Lieberman, have gone so far as to craft legislation that specifically exempts from FOIA any photographs

Glenn Greenwald has been good on this topic, and so has Chris Floyd. I've read some others on the subject, not as many as perhaps I should have, but then again my eyes aren't what they once were. And they've had their fill. Nonetheless, I do report that in all my travels I have not once seen anyone make any hay via the the following obvious points:

Aside from moral questions of right and wrong, there's also the obvious (but apparently unmentionable) fact that it's only propagandized and brainwashed Americans who don't know what's been going on at Abu Ghraib and elsewhere, and who would be shocked and enraged by the release of the photos. The people in Iraq, for example, and in Afghanistan, and in far too many other countries, know all about the torture that's been happening in the American and American-friendly torture chambers of the world. So how much will they really be inflamed by the photos? And conversely, how much will they be inflamed by the attempt to keep those photos hidden?

Second, if Obama and Graham and Lieberman and their ilk really cared about the safety of "members of the Armed Forces or employees of the United States Government deployed outside the United States", they would not block the release of the photos, but instead they would vow to end the Bush-era wars immediately, and to quit attacking foreign countries that never did anything to us, never could have, and never even wanted to. But of course they will never do any such thing. They are obviously concerned about the safety of the troops, exactly to the extent that the troops further the goals of empire.

It's all so obvious. No wonder nobody mentions it.

What's also obvious is that Obama and the Pentagon don't want to release the photos because of the impact they would have on "the home front", where we're the enemy and the ongoing battle is about control of information.

But here's the rub: what would happen if Americans knew a bit more about what went on during the Bush administration?

Not much, probably. The usual goons would celebrate a few more "Ay-rabs" "getting what they deserve", and the rest of us would hang our heads in shame. But fundamentally nothing would change, not only because most of us don't give a damn, but also because the rest of us have no means by which to change the vicious and corrupt system.

When they hand out the prizes for the most pathetic remnant of a former democracy, we'll be Number One. And that's pretty obvious too.