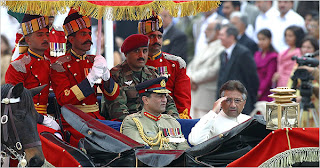 [Pakistan's] Supreme Court is expected to rule [today] on two petitions challenging General Musharraf’s eligibility on the grounds that is it unconstitutional for him to serve as both president and chief of the army staff.

This could get very interesting. Very dangerous, too.

Two senior lawyers close to the case said they were prepared for the court to return a verdict in General Musharraf’s favor. But even if it did, lawyers and political parties said they were gearing up to make further legal challenges over the next week in a last-ditch effort to derail the election. An opposition alliance, the All Parties Democratic Movement, upped the ante on Thursday by announcing that its members would resign en masse from the national and provincial assemblies that will hold the presidential election.

The move, which the opposition hoped would undercut the credibility of the vote, would take place on Tuesday, just four days before the election. It could force the provincial assembly and government in the North-West Frontier Province to dissolve, leaving the electoral college incomplete.

The government denies everything, of course. No possibility of anything interesting happening or about to happen, so move along.

General Musharraf’s supporters in the governing coalition say he has enough seats in the various assemblies to secure his victory.

On Thursday, Prime Minister Shaukat Aziz, flanked by other ministers, delivered the papers nominating General Musharraf, 64, on behalf of the president to the election commission.

“We fully believe that President General Pervez Musharraf, who is candidate of the P.M.L. and allied parties, will succeed,” Mr. Aziz said, referring to the Pakistan Muslim League, the state news agency reported.

Oh yes, we fully believe that he will succeed, even though the very act of filing those papers may have been illegal. Oh yes. Doo dee doo...

General Musharraf faces two opponents: a former Supreme Court judge, Wajihuddin Ahmed, 68, who is backed by the lawyers campaigning against military rule; and Makhdoom Amin Fahim, the vice chairman of the Pakistan People’s Party, which is led by the former prime minister Benazir Bhutto.

Mr. Ahmed’s candidacy is aimed at raising constitutional objections, and he may withdraw before the vote, lawyers said.

He was one of six Supreme Court judges who resigned in January 2000 rather than take an oath of allegiance to General Musharraf, who had seized power in a coup just three months before.

“It was contrary to the constitutional oath,” Mr. Ahmed said in a recent interview from his home in Karachi before traveling to the capital, Islamabad. “In my view it was defiling the Constitution.”

But they spin 'em as well in Pakistan as they do here. Thus:

Syed Mohammed Zafar, a member of the governing party who is advising the court, said in an interview that General Musharraf had made an important concession by promising to resign his military post if he wins the election.

Mr. Zafar, who is also an adviser to General Musharraf, has been calling for the president to resign his military post since 2004. This time, he said, he believed that the general would do so and that the Supreme Court should let the election go ahead, because having a military leader voluntarily step down would set an important precedent.

“Pakistan has very recently emerged from a period of constitutional deviation, and the best option is to allow the transition to proceed smoothly,” he told the court on Wednesday.

There's more and you can get it from the New York Times or from my frozen storage unit.
File under: Pakistan, Pervez Musharraf
Email ThisBlogThis!Share to TwitterShare to FacebookShare to Pinterest
Posted by Winter Patriot