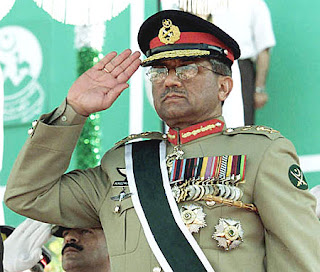 When the State Department sent Richard Boucher to Pakistan last month to dictate the terms under which President General Pervez Musharraf would retain power, he made it clear that the President General must be re-elected, but neglected to mention that the elections should be free and fair. So that's they way they're doing it.

To sidestep a constitutional requirement that the candidates for the presidency must be civilians, President General Musharraf has decided to step down as army chief of staff after his reelection. None of the opposition politicians are happy about this, but they do not control the army or the police. Speaking of which ...

A former Prime Minister who returned to the country to participate in the electoral process was promptly arrested and deported. Hundreds of opposition leaders have been imprisoned. The roads leading to the capital have been closed, military police have barricaded the area around the palace in order to prevent any disruptions by the nation's lawyers, and the process of re-electing the General has begun.

Thus the democratic process is alive and well in Pakistan, where they're building an impregnable fortress of democracy, with a little help from their friends.
File under: elections, GWOT, Pakistan, Pervez Musharraf
Email ThisBlogThis!Share to TwitterShare to FacebookShare to Pinterest
Posted by Winter Patriot