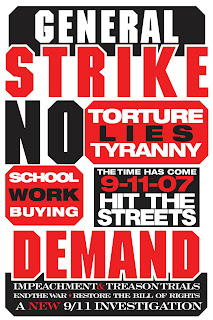 What are YOU doing on September 11th? May I suggest something?

The vast potential of the American people still lies untapped. The time has come to unleash it. The technique is well-known in most foreign countries, though not here. But it's actually quite simple. It's called a General Strike.

When I say "General Strike", I mean it's for all of us. You don't have to be a General to take part.

But what is it against? That's up to each of us.

But it can't be against everything! 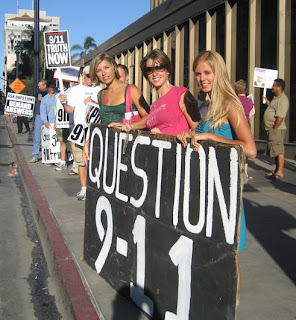 If you can't think of a reason, do it for me! Make yourself a sign that says "Google Winter Patriot" and carry it around with you on the 11th of September. Why not?

I'm just kidding, of course. But we need to keep spreading vital truths to people who don't have enough. We need to get visible. We need to see how many of us there are. And we need to make a statement, even if that statement is only "We've had enough!"

Would it hurt us? Of course it would. But in the long run it might do us more good than harm.

When I say "this is not about travel", I'm not saying we should all stay home.

If you can get to Washington, that's great. You'll have company.

If you can get to New York City, that might be even better. The sight of 9/11 Truth taking over Ground Zero has inspired a lot of good work. It would be great to be part of it this year.

But if you can't get to DC or NY, that's fine too. If you can get to your state capital, head for the government buildings. Otherwise just go downtown.

Carry a sign: "Peace Through Justice". "Inside Job". "Stop The War". "Paper Ballots, Hand Counted". "Google Winter Patriot". Or whatever.

We need to get active, and get visible, and watch our numbers grow. And we need to think about doing it again ... soon ... for as long as necessary.

You can find out what's happening in your area here.

If you know of other sites that might be useful in organizing ourselves, please post the URLs here. As always, I thank you for your cooperation.

Oh yeah; I almost forgot: I was only partly kidding about the sign. It doesn't have to say "Google Winter Patriot". But you do need a sign.

Your sign can protect you from the heat-ray weapon the Pentagon calls "Active Denial". Click here before you build it.

One final, personal, note, if I may: This is not something we can or should do out of hate, or anger, or fear. Surely we all feel anger and fear, and many of us feel hate. That's ok in my view. Considering the circumstances, that's entirely understandable. But that's not what this is about. And it won't help us build anything useful, either.

In my humble opinion, Stephen Stills had it right 35 or 40 years ago. He put it this way: