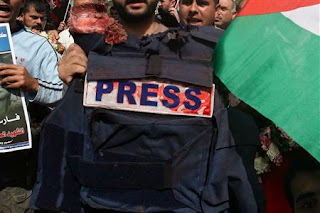 A leading human rights group called on Friday for an independent investigation into the death of a Reuters cameraman and other civilians in Gaza this week, saying Israeli forces may have targeted the media.

Reuters cameraman Fadel Shana, a 23-year-old Palestinian, was killed in the Gaza Strip on Wednesday while covering events in the enclave for the international news agency. He had been filming an Israeli tank dug in about 1,000 yards away.

Local doctors said on Thursday that tiny darts sprayed from a controversial missile used by Israel killed Shana [...] The last few seconds of video shot on Shana's tripod-mounted camera show the tank firing, then a midair explosion consistent with the burst of a missile.

Three other people were also killed by the "controversial missile" and at least one other person was wounded.

What exactly were the Israelis shooting at?

"Israeli soldiers did not make sure they were aiming at a military target before firing, and there is evidence suggesting they actually targeted the journalists," said Joe Stork, Middle East director at Human Rights Watch.

"Israel should investigate these deaths and, if crimes were committed, hold to account those responsible."

Human Rights Watch said interviews with an eyewitness to the shelling, a resident in a nearby village and a journalist who arrived just after the attack, as well as camera footage taken by Shana, indicated there was no military activity by Palestinian militants at the scene of the attack.

An Israeli military spokeswoman has said she could not confirm a tank fired at the cameraman and could not comment on weaponry it might have used. She added that the army, which has expressed regret, hoped to cooperate with Reuters to study the incident.

What else? Got context?

Troops killed 17 Palestinians, including several civilians, on Wednesday after three Israeli soldiers were killed in clashes in the Hamas Islamist-controlled enclave.

Did you ever notice?

Israeli soldiers are always on the defensive, even in foreign countries. Large numbers of Palestinian civilians are always killed "after" or "in retaliation for" the deaths of a few Israeli soldiers. And Israeli troops never enforce a brutal occupation; they're just always getting involved in "clashes" in areas controlled by nasty Islamists.

It's almost as if they think we're stupid.

But then again, maybe we actually are!
File under: Israel
Email ThisBlogThis!Share to TwitterShare to FacebookShare to Pinterest
Posted by Winter Patriot