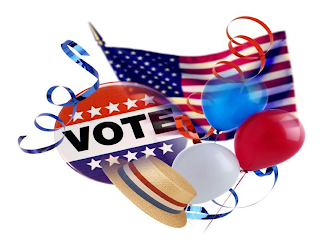 It's brilliant and stupid at the same time. It's so practical, it's practically perfect; but it's also ludicrous, and it’s impossible to imagine that it could ever be implemented. Welcome to my one and only post about electoral reform.

And it's not only a chicken-and-egg problem, but it's also an impossible one, because we don't have any chickens or any eggs.

But who cares? We're knee-deep in campaign propaganda anyway, so we might as well fantasize about something else for a minute. And as I've promised, this will be my only post on the subject.

IF -- it's a huge IF -- it were my job to reform the electoral system, I would reinstate some of the time-honored details of democracy which we have lost. We would have paper ballots; they would be counted by hand in public; and anyone who wanted to watch could do so.

But I would discard one principle of ancient democracy which seems very dangerous to me in these modern times. Perhaps there was a reason for it in the old days, when the citizens were a privileged few, and all of them were active in politics. But today, as I see it, there is no justification for the notion that all the votes should be counted equally.

If you don't believe me, consider the exit polls from the 2004 presidential election. Huge proportions of the people who voted for George Bush thought that Iraq had weapons of mass destruction, and that Saddam Hussein had been responsible for the attacks of 9/11.

Some critics may charge that my idea for reform is too complicated. I agree. If punching a hole in a machine-readable card is too complicated, all thoughts of reform are ludicrous. And I've already said this was a ludicrous idea.

Some may say my plan is elitist and anti-democratic. I agree that it's elitist. But under my system, the "elite" would not be the very few whose families have too much money, but the unlimited numbers of voters who made an effort to educate themselves. In other words, anyone who wanted to join the "elite" could do so. And that's not so anti-democratic after all, is it?

So much for the critics. The benefits would start flowing immediately, in incentives working on the politicians, the media, and the voters themselves.

If deluding supporters meant their votes would become worthless, there would be no reason for any party or any politician to do it -- and those who did so would lose.

Any news provider that persisted in lying about the government and the world would effectively be disenfranchising its subscribers. So deceit would be counterproductive to the media as well.

If learning about the basics of government and keeping an eye on the news of the world meant that their votes would become more valuable, some people would certainly start paying more attention. And those who prefer to sit back and slurp the propaganda would become irrelevant.

But I might suggest that this post be viewed not as a ludicrous proposal for reform, but as a serious comment on why our country's experiment with democratic government has failed so dismally: for decade after decade, the world's most powerful democracy has been driven by people who didn't know the gas from the brakes.

You can congratulate yourself if you weren't one of them. But don't get too carried away. Every single one of their votes counted just as much as yours did.

File under: elections
Email ThisBlogThis!Share to TwitterShare to FacebookShare to Pinterest
Posted by Winter Patriot