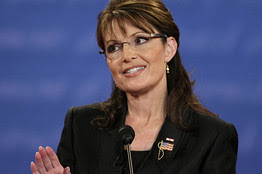 I couldn't help but admire Sarah Palin last night as she "countered" the "conventional wisdom" that her main weakness is inexperience:

My experience as an executive will be put to good use as a mayor and business owner and oil and gas regulator and then as governor of a huge state, a huge energy producing state that is accounting for much progress towards getting our nation energy independence and that's extremely important.

But it wasn't just that experience tapped into, it was my connection to the heartland of America. Being a mom, one very concerned about a son in the war, about a special needs child, about kids heading off to college, how are we going to pay those tuition bills? About times and Todd and our marriage in our past where we didn't have health insurance and we know what other Americans are going through as they sit around the kitchen table and try to figure out how are they going to pay out-of-pocket for health care? We've been there also so that connection was important.

But even more important is that world view that I share with John McCain. That world view that says that America is a nation of exceptionalism. And we are to be that shining city on a hill, as President Reagan so beautifully said, that we are a beacon of hope and that we are unapologetic here. We are not perfect as a nation. But together, we represent a perfect ideal. And that is democracy and tolerance and freedom and equal rights. Those things that we stand for that can be put to good use as a force for good in this world.

John McCain and I share that. You combine all that with being a team with the only track record of making a really, a difference in where we've been and reforming, that's a good team, it's a good ticket.

CNN was running an onscreen feel-good meter, tracking the responses of a focus group of "undecided Ohio voters". The meters seemed to prefer Biden most of the time, but they absolutely spiked when Sarah Palin said:

This is political code, but it is very thinly veiled, and it means:

Judgement? Experience? Humbug! I'm talking about the essential skills now, and Sarah Palin has what it takes. She'd be perfect as Vice President. She'd be even better as President.

Sarah Palin proved last night that she can tell the right lie at the right time -- with a smile on her pretty face -- and generate the right response, even from people who don't seem to like her very much!

That's it! That's whole the job.

File under: Sarah Palin
Email ThisBlogThis!Share to TwitterShare to FacebookShare to Pinterest
Posted by Winter Patriot