Double Cover [2]: What Is A Commando Raid? 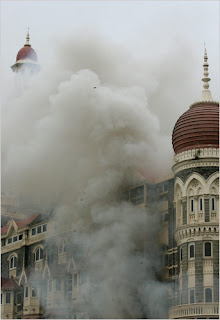 Here are some brief snippets from more-or-less randomly selected mainstream news reports pertaining to the Mumbai attacks. I have added the emphasis.

The NYT has a map showing where the attacks took place -- 13 locations in all.

Who Was Caught By Surprise?

Michael Evans of the [UK] Times:

British security and intelligence sources said there had been increasing concern, particularly in the United States, that a “terrorist spectacular” was on the cards. [...] The Americans have been expecting an atrocity partly because of the recent CIA success in eliminating figures in al-Qaeda, using Predator unmanned drones, firing Hellfire missiles at hideouts in the tribal regions of Pakistan. About a dozen al-Qaeda figures have been killed this year.

Spy agencies around the world were caught off guard by the deadly attack, in which gunmen sprayed crowds with bullets, torched landmark hotels and took dozens of hostages.

"We have been actively monitoring plots in Britain and abroad and there was nothing to indicate something like this was about to happen," a British security official told The Associated Press on condition of anonymity because of the sensitivity of his work.

Britain is the former colonial power in India and Pakistan and closely monitors terrorist suspects in those countries.

"This type of terrorism is spreading, through Pakistan and now India, but we were all surprised by such a large-scale attack like this," said Wajid Hassan, Pakistan's High Commissioner in London. "This is no coincidence that this type of attack happened so soon after the bombing of the Marriott Hotel. People from all countries are being paid to fight this al-Qaida war. This is a war that goes beyond any nationality."

How Many Attackers Were There?

The identity of the attackers remained a mystery. CNN-IBN quoted police sources as saying they believed there were some 26 gunmen, most of them young.

Police say the attackers came by boats to the waterfront near the Gateway of India monument.

Nine suspects have been arrested in connection with the attacks, and seven are fishermen, police said. Police also found a boat loaded with explosives near the Taj Mahal, also located on the waterfront.

The gunmen hijacked cars -- including a police van -- and split into at least three groups to carry out the attacks, police said.

One group headed toward the Cafe Leopold, a popular hangout for Western tourists, firing indiscriminately at passers-by on the street. They then opened fire and lobbed grenades at the Chhatrapati Shivaji Terminus railway station, a Victorian building.

As police rushed to the scene of the attacks, gunmen attacked the Cama Hospital.

The gunmen appear to have come ashore at the Sassoon Docks, not far from the Leopold. They moved on to the train station, the old Victoria Terminus, and then opened fire on Cama and Albless Hospital — where some of their earlier victims encountered a second round of gunfire. At one point, the gunmen hijacked a police vehicle and opened fire on journalists and spectators gathered near a famous theater, the Metro Cinema.

Witnesses and security camera video of the gunmen built a portrait of them as young men dressed in jeans and trendy T-shirts, bearing rucksacks and guns. It remained unclear who they were, what they wanted, or how many survived.

Who Were The Targets?

Several witnesses said the gunmen demanded to see passports from cornered guests, separating American and British tourists from the others.

"I guess they were after foreigners, because they were asking for British or American passports," said Rakesh Patel, a British witness who lives in Hong Kong and was staying at the Taj Mahal hotel on business. "They had bombs."

Rakesh Patel, a British businessman who escaped the Taj, told a television station that two young men armed with a rifle and a machine gun took 15 hostages, forcing them to the roof.

The gunmen, dressed in jeans and T-shirts, “were saying they wanted anyone with British or American passports,” Mr. Patel said.

Witnesses at the hotels that were targeted said the attackers had singled out British and American citizens.

"They kept shouting: 'Who has US or UK passports?'" Ashok Patel, a British citizen who fled from the Taj Mahal hotel, said.

Several European legislators, visiting Mumbai ahead of a European Union-India summit, were among those inside the Taj when it was besieged.

Guests who escaped recounted how the gunmen had methodically tried to round up US and British citizens.

"They said they wanted anyone with British and American passports," said one Briton, Rakesh Patel.

Alex Chamberlain, a British citizen who was dining at the Oberoi, told Sky News television that a gunman ushered 30 to 40 people from the restaurant into a stairway and, speaking in Hindi or Urdu, ordered everyone to put up their hands.

"They were talking about British and Americans specifically. There was an Italian guy, who, you know, they said: 'Where are you from?' and he said he's from Italy and they said 'fine' and they left him alone. And I thought: 'Fine, they're going to shoot me if they ask me anything' — and thank God they didn't," he said.

Alex Chamberlain, a sports website director, escaped from the hotel through a fire exit. The militants ordered everyone upstairs, told them to put their hands up and asked if there were any British or Americans, he said. "My friend said to me: 'Don't be a hero, don't say you are British'."

Alex Chamberlain, a Briton who works for Indian Premier League cricket, was in the Oberoi hotel when the attackers opened fire. Chamberlain said that a group of about 40 people was "marched up like sheep" to the roof by a "young guy with a submachine gun, who was about 22 or 23."

The gunmen then asked if any of the hostages were British or American, Chamberlain told SkyNews.com.

"My Indian friend told me, 'don't be a hero' and 'tell him you're Italian' and that kind of stuff," Chamberlain said.

"They told everybody to stop and put their hands up and asked if there were any British or Americans," Alex Chamberlain, a British guest at the Oberoi/Trident hotel, said after fleeing his captors via a fire escape.

They just fired randomly at people and then ran away.
-- Nasim Inam, at Chhatrapati Shivaji railway terminus

At least three top Indian police officers — including the chief of the anti-terror squad — were among those killed, said A.N. Roy, a top police official.

What Is A Commando Raid?

Even by the standards of terrorism in India, which has suffered a rising number of attacks this year, the assaults were particularly brazen in scale and execution. [...] Unlike previous attacks in India this year, which consisted of anonymously planted bombs, the assailants on Wednesday night were spectacularly well-armed and very confrontational. In some cases, said the state’s highest-ranking police official, A. N. Roy, the attackers opened fire and disappeared.

Security officials and analysts agreed that the assaults represented a marked departure in scope and ambition from other recent terrorist attacks in India, which targeted local people rather than foreigners and hit single rather than multiple targets.

The Mumbai assault, by contrast, was "uniquely disturbing," said Sajjan Gohel, a security specialist in London, because it seemed directed at foreigners, involved hostage-taking, and was aimed at multiple "soft, symbolic targets." The attacks "aimed to create maximum terror and human carnage and damage the economy," he said by phone.

How Much Planning Was Involved?

Although Mumbai has been the scene of several terrorist attacks in recent years, analysts said Wednesday's assaults required a previously unseen degree of reconnaissance and planning. The scale and synchronization of the attacks pointed to the probable involvement of experienced commanders, some observers said, suggesting possible foreign involvement.

State media Press Trust of India, citing Union Cabinet Minister Kapil Sibal, reported the gunmen had worked for months to prepare, even setting up "control rooms" in the two luxury hotels that were targeted.

Indian officials said that it was too early to say which [group] carried out last night’s attacks, but the scale, complexity and targets suggested that it was the work of an Islamist group.

It may indeed have been the work of an Islamist group. But to my eye, the scale, the complexity and the targets -- combined with the reporting -- suggested that it was something else entirely.

the series continues here:
Double Cover [3]: What Is A False Flag Attack?

previously:
Double Cover [1]: Nothing Can Ever Be The Same