Land For Nukes: Dying Of Sadness 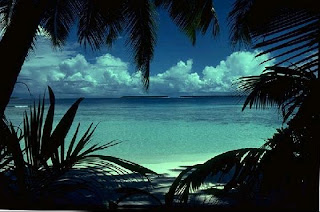 Do you want the truth? Can you handle the truth? There's more than enough here to make you weep and scream, from Chris Floyd:

Britain and America cut a secret deal: land for nukes. London sliced off a sliver of its imperial dominions and gave it to Washington, in exchange for a price reduction on some sleek new nuclear missiles. Together, the two great democracies then drove the inhabitants of the sliver from their homes by force, dumping them into poverty-ridden exile hundreds of miles away. Washington built an imperial outpost on the stolen land, a military base which it used to "project dominance" over strategic regions in Central Asia and the Middle East. Later, the outpost became yet another link in Washington's chain of "black sites" -- secret prisons where captives snatched without charges or due process could be hidden from the world and tortured.

This is the story of the Chagos Archipelago, a chain of small islands in the Indian Ocean whose inhabitants were forced from their land forty years ago to make way for a military base on the island of Diego Garcia. The base, built and staffed largely by the Americans but operated jointly with the British, has been the launching pad for countless air strikes against Iraq (in two wars) and Afghanistan. It has also served as one of the sinister way stations in America's global gulag. In return for its use of the ethnically cleansed land, Washington graciously knocked off $14 million from the price tag of some Polaris nuclear missiles that Britain craved, in its never-ending struggle to retain some crumbs of its own, now-faded "projection of dominance" on the world stage.

Chris's site gets hacked a lot, and it's having trouble again lately, so it probably won't hurt if I post big excerpts here.

For years, American and British officials conducted a careful, deliberate campaign of deceit to "justify" the theft of the land. But finally, a series of British courts ruled that the seizure had been illegal and that the Chagossian people had a right to return to their homes. In a desperate bid to avert justice, the government of Tony Blair invoked the "royal prerogative" to quash the rulings. When the courts found the government had improperly applied this nebulous but draconian power, it appealed to the Law Lords.

Late last month, the Lords delivered their decision: by the slim margin of 3-2, they upheld the government, and denied the Chagossian's right to return to their homes. The ruling contained these chilling words from Lord Hoffman: ""The right of abode is a creature of the law. The law gives it and the law may take it away." Even though the judges acknowledged that the initial theft had been wrong, the "law" -- in the form of arbitrary decisions by a government acting in the name of an unelected monarch -- had papered over that festering injustice, and the cover must be left undisturbed. Thus in quiet, measured, respectable tones, the Magna Carta is cast aside. But what of that? As we have seen in the United States in the past few years, that ancient, crumbling document now has all the force of a wad of tissue paper.

You should know more about this. We all should. John Pilger's "Stealing a Nation" is a powerful video documentary record of a long and very shameful episode. I posted it here last summer; it's not available in the same form anymore (but see below!)

In Pilger's words, which I quoted at the time:

There are times when one tragedy, one crime, tells us how our whole system works, behind its democratic facade, and helps us understand how much of the world is run for the benefit of the powerful, and how governments often justify their actions with lies.

The court's ruling was lost in the great global media roar over the U.S. elections. But John Pilger was there with the Chagossians when the decision was handed down, and he gives this report (from Antiwar.com):

I went to the Houses of Parliament on 22 October to join a disconsolate group of shivering people who had arrived from a faraway tropical place and were being prevented from entering the Public Gallery to hear their fate. This was not headline news; the BBC reporter seemed almost embarrassed. Crimes of such magnitude are not news when they are ours, and neither is injustice or corruption at the apex of British power.

Lizette Talatte was there, her tiny frail self swallowed by the cavernous stone gray of Westminster Hall. I first saw her in a Colonial Office film from the 1950s which described her homeland, the island of Diego Garcia in the Indian Ocean, as a paradise long settled by people "born and brought up in conditions most tranquil and benign." Lizette was then 14 years old. She remembers the producer saying to her and her friends, "Keep smiling, girls!." When we met in Mauritius, four years ago, she said: "We didn't need to be told to smile. I was a happy child, because my roots were deep in Diego Garcia. My great-grandmother was born there, and I made six children there. Maybe only the English can make a film that showed we were an established community, then deny their own evidence and invent the lie that we were transient workers."

During the 1960s and 1970s British governments, Labour and Tory, tricked and expelled the entire population of the Chagos Archipelago, more than 2,000 British citizens, so that Diego Garcia could be given to the United States as the site for a military base. It was an act of mass kidnapping carried out in high secrecy. As unclassified official files now show, Foreign Office officials conspired to lie, coaching each other to "maintain" and "argue" the "fiction" that the Chagossians existed only as a "floating population." On 28 July 1965, a senior Foreign Office official, T.C.D. Jerrom, wrote to the British representative at the United Nations, instructing him to lie to the General Assembly that the Chagos Archipelago was "uninhabited when the United Kingdom government first acquired it."...

"To get us out of our homes," Lizette told me, "they spread rumors we would be bombed, then they turned on our dogs. The American soldiers who had arrived to build the base backed several of their big vehicles against a brick shed, and hundreds of dogs were rounded up and imprisoned there, and they gassed them through a tube from the trucks' exhaust. You could hear them crying. Then they burned them on a pyre, many still alive."

Lizette and her family were finally forced on to a rusting freighter and made to lie on a cargo of bird fertilizer during a voyage, through stormy seas, to the slums of Port Louis, Mauritius. Within months, she had lost Jollice, aged eight, and Regis, aged ten months. "They died of sadness," she said. "The eight-year-old had seen the horror of what had happened to the dogs. The doctor said he could not treat sadness."

Floyd's piece, "Dying of Sadness in the Shadow of Empire ", concludes:

For the Chagossians, the fight goes on. They will next appeal to the European Court of Human Rights, but that seems a forlorn course. Even if, after what would doubtless be years of legal manuevering, they received a favorable verdict -- what then? Would any U.S. president -- even one famously committed to hope and change -- dismantle a major American military outpost just because some prissy Europeans told him to?

Especially a base of such strategic importance. For it seems that bombing and torturing people are not the only uses the Anglo-American defenders of civilization have for the Diego Garcia base. Although the base itself takes up only a fraction of the archipelago, the United States and Britain insist that they must have a 100-mile exclusion zone around the facility -- which is why it is not only the natives of Diego Garcia proper who are barred from their homes, but all the Chagossians as well.

As David Simon points out in the Guardian, this is a highly unusual demand; if it was applied to the several U.S. bases in Britain, for example, it would require the removal of 60 million people from their homes. What else are the Americans and Britons doing at Diego Garcia that requires such a ring-fence of secrecy? One possible clue might lie in the fact that neither Britain and the United States recognize Diego Garcia as part of the African Nuclear Weapons Free Zone Treaty, which both nations signed in 1996. It seems clear that one or both of the powers are either keeping nuclear weapons at the site, or wish to be able to put them there at any time -- in preparation for, say, a strike on Iran or some other state gone "rogue".

In any case, it is highly likely that Washington and London will be able to drag out the case until the Chagossians die off or dwindle into whispering insignificance, like so many of the "recalcitrant tribes" who have stood athwart the various agendas of our ever-civilized Anglo-American elites.

And here's the video: