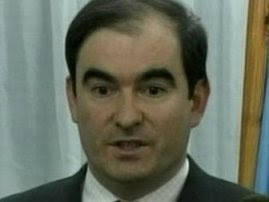 John Ging [photo], director of the United Nations Relief and Works Agency for Palestinian refugees in Gaza, has told an Israeli newspaper that Israel's policies in the Gaza Strip are strengthening extremists there.

As I understand it, Israel and the USA both devote serious resources to fomenting terrorism, and neither country is above fabricating synthetic terror, if some terror happens to be required and none can be found or fomented. Of course they strengthen extremists!

Why? Because they need to have a war going, and to do that, they need to have an enemy, and the enemy must be as inhuman as possible -- capable of enormous and heinous crimes. That's why. If the US and/or Israel ever defeated the extremists, who would they have left to shoot at? Who would sell them the bullets, bombs, and fighter planes they need to protect themselves from the kids in the streets throwing rocks at their tanks?

But I'm just a cold blogger; I have the freedom to speak my mind, or type it, in return for the privilege of having almost no readers.

John Ging has no such luxury. People pay attention when he speaks. So he has to choose his words very carefully. And it's John Ging's choice of words that I find most remarkable, not his conclusion (which seems quite obvious to me).

by not easing restrictions at crossings into the Strip during the months of the cease-fire, Israel bolstered extremists' claims that the closures represent a political, rather than security-related move. 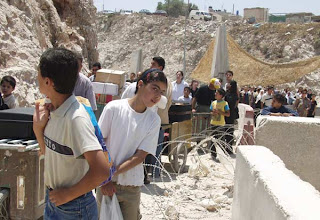 "The extremists claimed that the Israeli closure is not related to the rockets. We said that wasn't true, we said the illegal firing of Qassams must stop, that they have no justification," Ging said.

"But the stance has been strengthened in recent months that the closure is political and not security-related. There were several months of tahadiyeh [cease-fire], but no easing at the crossings. This failure to ease the crossings was political."

Political? Well, of course it was; anybody can see that. But look at how John Ging says it:

Ging said he is not interested in judging Israeli policy according to interpretations based on ulterior motives, but on public declarations that Israeli security must be maintained. "If the platform is security and the desire to break the cycle of violence, Israeli policy has destructive, counterproductive consequences," he said.

That's a big "if", and John Ging throws it in, perhaps as a matter of professional necessity. But the question it implies is enormous. 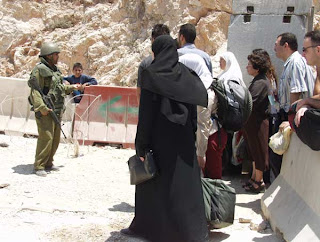 Actions speak louder than words, and clearly the policy is destructive and counterproductive to "breaking the cycle of violence". So why do the Israelis continue the policy? Either they are stupid or they see some political advantage in it.

Are they stupid? Apparently not. Are they seeking some political advantage? John Ging won't say; but it's clear that he wants you to think about it.

He wants you to think about some other things, too. Ha'aretz provides some context:

Ging's remarks came last Thursday morning, when Israel closed the Kerem Shalom crossing, which was expected to be opened after having been closed for eight days. Gas supplies were also expected to be renewed.

In the afternoon, however, Defense Minister Ehud Barak instructed the crossings to remain closed. European Union consuls were also prohibited from entering the Strip. According to the coordinator of Israeli government activities in the territories, Peter Lerner, "the policy today is to only allow entry when it is most critical."

Ging said he does not accept the security logic during the cease-fire of only allowing humanitarian aid to the Strip. "If what is allowed to enter is only humanitarian, the entire population here is brought to a situation in which it is dependent on food aid. Is that the goal? People want to work, to create and to be rewarded for their labor, not to stand in line to receive charity," he said. 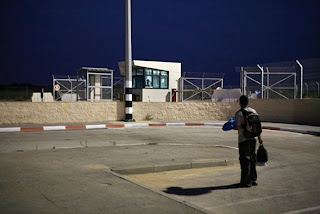 "We are not talking about how to keep people alive, but about quality of life, not only physically and materially. This way, the people's mindset and emotional state are liable to be harmed," he said.

But the emotional damage is always.

Ging said he continues to be surprised by how people cling to their humanity, even having "lived so long in uncivilized conditions," and continue to hope their children develop and grow in better conditions.

Since the cease-fire went into place this summer, Ging said, fewer supplies have passed through the crossing than did in the beginning of 2006, when the western Negev suffered incessant Qassam rocket fire.

"Why? There is no need to explain the security challenges here. We are always told that we must ensure security arrangements, and we accepted that," he said. "But no one has explained to me the security reason behind the closure of every crossing. The crossings have tremendously sophisticated security devices. No one can pass with an explosives belt or weapon without being detected."

"Explain to me why people who present no security threat are not authorized to work in Israel as in the past. I ask the Israelis, why don't you allow the entry of cement, even during the cease-fire, so we can build new schools and reduce the crowdedness in classrooms?"

The Ha'aretz piece has more detail; for now, please note the following:

The policy of extended siege has proven itself to be ineffective, Ging said, adding that international observers have called for a new approach. In his view, to improve the situation, Israel should take a more positive approach and open all the crossings, ensuring freedom of movement to all people.

"If indeed the goal is the stated one: to achieve security and stability to lay the foundation for peaceful relations," Ging said.

There's that "if" again.

"If indeed the goal is the stated one..."

I can't help thinking that contemporary history -- especially contemporary American history -- would be quite a bit different if it were commonplace, rather than exceptional, to wonder whether the stated goals of our government are actual aims or only rhetorical devices.

For more on this theme, see: "A Formula For Endless War: The Wounded Shark, The Quest For Victory, And The Illusion Of Success"

File under: Gaza, Israel
Email ThisBlogThis!Share to TwitterShare to FacebookShare to Pinterest
Posted by Winter Patriot