General In Charge Of Uniforms Gets Fourth Star 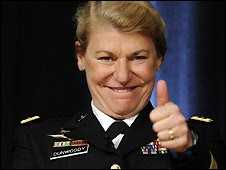 An American woman has been promoted to four-star general - the first female to reach the US army's highest rank.

In her acceptance speech, Ann E Dunwoody said she had never expected to rise so high in the ranks in her 33-year career.
...

There are 21 female generals, most of them one-star, in the US army.

Gen Dunwoody comes from a long line of soldiers.

"A Dunwoody has fought in every American war since the Revolution," said army chief of staff Gen George Casey.
...

Defence Secretary Robert Gates said: "History will no doubt take note of [Dunwoody's] achievement in breaking through this final 'brass ceiling' to pin on this fourth star."

"But she would rather be known and remembered first and foremost as a US army soldier."

She is now head of the Army Materiel Command, in charge of weapons, equipment and uniforms for the army.

Women are barred from combat roles but have been allowed in the last two decades to serve in a wide variety of other positions.

She's the Matriarch of the Military. Lookin' after the stuff.

Puts a horrifying new spin on an old line: "Ma, where's my boots?"
File under: Ann Dunwoody
Email ThisBlogThis!Share to TwitterShare to FacebookShare to Pinterest
Posted by Winter Patriot