Torturing Democracy: A Documentary That Could Put Dick Cheney Out Of Our Misery 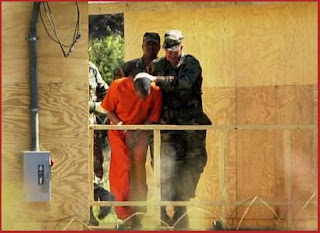 Torturing Democracy, an expose of how and why America came to be involved in open large-scale torture of prisoners (many of whom were simply shepherds captured by mountain tribesmen and sold into captivity), is now available for viewing online.

As Scott Horton reported last month, PBS can't find a time slot for this Frontline documentary until January 21, 2009 -- the day after Bush and Cheney are scheduled to leave office.

Horton has reported more recently that this documentary could help to provide "A Ticket to The Hague for Dick Cheney". Why? Because it has the power to change the minds of influential people in denial.

Gene Burns is one of the nation’s most popular talk radio hosts. For years he has dismissed accounts of torture; America, he has said, does not torture. But last night, after watching Torturing Democracy and realizing that he had not understood how important and serious an issue torture had become, Burns abruptly changed his tune. Here’s a transcript of his remarks.

I now believe that some international human rights organization ought to open an investigation of the Bush Administration, I think focused on Vice President Dick Cheney, and attempt to bring charges against Cheney in the international court of justice at The Hague, for war crimes. Based on the manner in which we have treated prisoners at Guantánamo Bay, and the manner in which we have engaged in illegal rendition–that is, surreptitiously kidnapping prisoners and flying them to foreign countries where they could be tortured by foreign agents who do not follow the same civilized standards to which we subscribe.

I’ve always said that I’ve thought that even at Guantánamo Bay the United States was careful to stay on this side of torture. In fact, you may recall that on a couple of occasions we got into a spirited debate on this program about waterboarding, and whether waterboarding was torture. And I took the position that it was not torture, that it was simulated drowning, and that if that produced information which preserved our national security, I thought it was permissible.

And then I saw Torturing Democracy.

And I’m afraid, now that I have seen what I have seen, that I was wrong about that. It looks to me, based on this documentary, as if in fact we have engaged in behavior and practices at Guantánamo Bay, and in these illegal renditions, that are violations of the international human rights code.

And I believe that Dick Cheney is responsible. I believe that he was the agent of the United States government charged with developing the methodology used at Guantánamo Bay, supervising it for the administration, and indulging in practices which are in fact violations of human rights.

A large part of the population still credits the Bush Administration’s absurd claim that it never embraced or applied torture to detainees as a matter of policy. Two recent documentaries, Alex Gibney’s Oscar-winning Taxi to the Dark Side (for which I was both a consultant and interviewee) and Sherry Jones’s PBS feature Torturing Democracy investigate the administration’s policies and conduct. Both draw from decision-makers inside the administration and soldiers on the frontline.

The administration did its best to spike both films. Taxi was to be aired on the Discovery Channel, but with Discovery Communications then in the process of going public and facing sensitive SEC clearances, executives apparently decided not to risk provoking the anger of the White House. As I reported elsewhere, PBS also found that it had no network space for Torturing Democracy until January 20, 2009 — the day the Bush Administration decamps from Washington.

Why was the administration so concerned about these two films? The conversion of Gene Burns supplies the answer. No one who sits through these films, I believe, will be able afterwards to accept the official version of events. George Bush has good reason to be afraid of too many Americans watching these documentaries.

George Bush is not the only one who has good reason to be afraid of too many Americans watching these documentaries. And that, in my opinion, is good incentive to watch them -- and to spread the word about them!

So here are those links again:
Torturing Democracy
Taxi to the Dark Side