I made a sleeping error, or at least I think that's what happened. I went to sleep one night as usual, and woke up the next morning with a knot in my back the size of a small soccer ball. Lots of pain, no strength, no mobility. Oops.

It's been getting better, but very slowly, and the effects have spread to my neck, shoulders, and arms. So I have been spending hours every day stretching, soaking in hot water, massaging, and doing anything else I can to regain strength and mobility, and to reduce the pain.

Typing is very difficult, and I can't do much more of it at the moment, but I will be back with you as soon as I can. In the meantime, please hang tough, as usual. And for those of you who have been posting at Winter Patriot dot com, please keep up the good work.
Filed under: leave of absence
by Winter Patriot on 1:45:00 AM

A Simple Question About Presidents And Their Actions 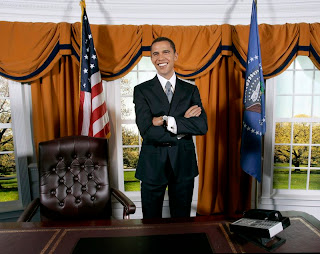 Over the past year or so, as the race for the presidency not-so-gradually became even more obviously farcical than I ever thought it could get, I often found myself overwhelmed by the split capacity of the "progressive-Democratic" writers I had been reading.

But many of them have been even more capable of ignoring "progressive-Democratic" transgressions of various sorts, up to and including truly horrific public policy. This part of the "job" should have been the hard part, but most of them have managed to make it seem easy as well.

In my opinion, the ascension of and worldwide adoration for Savior Obama has done more damage to the causes of peace, truth and justice than any event since -- and possibly even including -- the so-called "terrorist attacks" that launched the so-called "Global War On Terror".

The American imperial monster lives on, but now -- for far too many people -- its deadly tentacles are heavily masked.

Only the mask is new. The depredations remain the same. Incredibly (or predictably!), Budda Obama's campaign of hope and change and unity is turning out to be the precursor to an administration where change remains something you can hope for, whereas unity is now. And unity, of course, means uniting behind the horrific abuses of the previous administration -- and making those abuses permanent.

But the new mask is perhaps more powerful than any mask previously used to hide the imperial abuses of the American state. It is much more powerful because it's much more personal, existing, as it does, entirely in the splendor of the individual imagination.

I had a short and none-too-pleasant run-in with the mask a few days ago. The father of one of my wife's friends, a very pleasant and intelligent man, was telling me that America was now on a new track, that Obama's decision to retain Bob Gates as Secretary of Defense was a good one, and so on.

I was not in a good mood to hear such things, especially since I had just finished reading Chris Floyd's piece about Obama having ordered 17,500 more troops into Afghanistan. Floyd quoted an article from the New York Times which described a raid on Afghan civilians, apparently by US Special Forces, in which an entire family was gunned down, except for a four-year-old child.

Read this slowly and carefully, if you can stand it:

One day this month, an old man who called himself Syed Mohammed sat on the floor of his mud-brick hut in the eastern Kabul neighborhood of Hotkheil and recounted how most of his son’s family was wiped out in an American-led raid last September.

Mr. Mohammed said he was awakened in the early morning to the sound of gunfire and explosions. Such sounds were not uncommon; Hotkheil is a Pashtun-dominated area, where sympathies for the Taliban run strong.

In a flash, Mr. Mohammed said, several American and Afghan soldiers kicked open the door of his home. The Americans, he said, had beards, an almost certain sign that they belonged to a unit of the Special Forces, which permits uniformed soldiers to grow facial hair.

“Who are you?” Mr. Mohammed recalled asking the intruders.

“Shut up,” came the reply from one of the Afghan soldiers. “We are the government.”

Mr. Mohammed said he was taken to a nearby base, interrogated for several hours and let go as sunrise neared.

When he returned home, Mr. Mohammed said, he went next door to his son’s house, only to find that most of his family had been killed: the son, Nurallah, and his pregnant wife and two of his sons, Abdul Basit, age 1, and Mohammed, 2. Only Mr. Mohammed’s 4-year-old grandson, Zarqawi, survived.

“The soldiers had a right to search our house,” Mr. Mohammed said. “But they didn’t have a right to do this.”

Bullet holes still pockmarked Nurallah’s home more than four months after the attack, and the infant’s cradle still hung from the ceiling.

The day after the attack, a senior Afghan official came to the door and handed Mr. Mohammed $800.

“If you spent some time here, you would see that we are not the kind of people who would get involved with the Taliban,” Mr. Mohammed said. “Anyway, what was the fault of the babies?”

I said a few more harsh words about our new president, but our friend interrupted to say I should "cut Obama some slack" since "he hasn't been in office very long" and therefore, presumably, he hasn't even started to reveal his true agenda.

I showed my disgust and walked away as quickly as I could. My wife was very angry with me, saying I had been rude to her guest, and I suppose she was right about that.

We disagree about whether my rudeness was called for. But had I not turned tail and fled, I would have had to ask him:

How long does a President have to be in office before we can start judging him according to what he actually does?

You and my other previously regular reader will both be happy to know that I'm starting to find time to blog again. I've missed a lot of what's gone on lately, but I've been reading Winter Patriot dot com and I've been very impressed with what's been going on there. Thanks to everyone who has been blogging at our community site in my absence (or silence), I've been learning a great deal and being enticed (or forced) to ride some trains of thought I hadn't previously enjoyed (or suffered) -- and I hope you have been, too.

I'll have more for you soon -- whatever "soon" means! Certainly sooner than the six or eight weeks it's been since I last posted anything -- not to mention anything worth reading!

It's been a long time since I've added any links to my sidebar; there are probably lots of sites that I should link to that I don't even know about, or that I do know but I've forgotten to add... In any case, if you wish to welcome me back with a comment mentioning a site you'd like to see on my sidebar, please feel free.