Who is stirring the Lebanese pot? 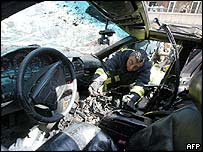 A veteran Lebanese politician has been killed in a bomb blast in the capital Beirut, police say.

George Hawi - former Communist Party leader and an opponent of Syria - died when his car blew up as he drove through the Wata Musaitbi district.
...
Prime Minister Najib Mikati expressed shock at Mr Hawi's death.

"We are stunned," he told reporters. "With every achievement by the Lebanese state, we see that there are those who want to target security and send messages of this sort."

Another senior opponent of Syria, Druze leader Walid Jumblatt, said the people would have to pay a heavy price for taking the country into their own hands.

"The life of anybody who wants a democratic Lebanon is in danger," he told BBC World TV.

An anti-Syrian politician has been killed after a bomb ripped through his car in Beirut, witnesses and security sources say.

They said George Hawi, former leader of the Lebanese Communist Party, died instantly in the blast on Tuesday morning in the Wata Musaitbi neighbourhood of Beirut.

Witness Rami Abu Dargham told Reuters: "The car kept going and we then saw the driver screaming and he jumped out of the window. We rushed to the car and saw Hawi in the passenger seat with his guts out."

The bomb was apparently placed under the passenger seat of Hawi's Mercedes car and was detonated by remote-control, security sources said.
...
An opposition figure, Walid Jumblatt, said the killing of Hawi, whom he described as a nationalist leader, sent a message to all Lebanese.

"Some sides want to cause a state of instability in Lebanon by foiling the success of the elections in northern Lebanon," said Jumblatt, the leader of the Progressive Socialist Party.
...
It was the second killing of an anti-Syrian figure in Beirut this month.

Newspaper columnist Samir Kassir was killed on 2 June when a similar explosion destroyed his car.

Hawi's killing comes two days after the end of Lebanon's parliamentary elections which were won by an anti-Syrian alliance led by Saad al-Hariri, son of former prime minister Rafiq al-Hariri, who was also assassinated, on 14 February.

And the killings continue. Big bombs. Big attacks. The people who did this were making sure they didn't miss. It's just a hunch, no more. But to me, these assassinations look like the work of highly experienced professional killers. Terrorists of international reach, so to speak. If you get my drift.

Maybe the following is relevant; then again maybe not. It's from Chris Floyd in the Moscow Times of January 25th, and I wouldn't be a bit surprised ... Darkness Visible: The Pentagon Plan to Foment Terrorism is Now in Operation

More than two years ago, we wrote here of a secret Pentagon plan to foment terrorism: sending covert agents to infiltrate terrorist groups and goad them into action – i.e., committing acts of murder and destruction. The purpose was two-fold: first, to bring the terrorist groups into the open, where they could be counterattacked; and second, to justify U.S. military attacks on the countries where the terrorists were operating – attacks which, in the Pentagon's words, would put those nations' "sovereignty at risk." It was a plan that countenanced – indeed, encouraged – the deliberate murder of innocent people and the imposition of U.S. military rule anywhere in the world that American leaders desired.

This plan is now being activated.