Old News: The USA Has Been A Police State Since 1787 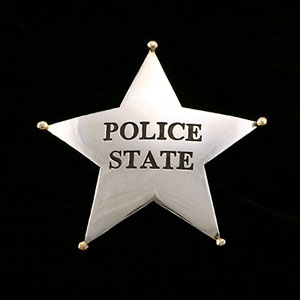 Last week the FBI raided the homes of anti-war activists in multiple states simultaneously, prompting Paul Craig Roberts to write a searing column called "It Is Official: The US Is A Police State".

I caught excerpts from Roberts and comments on his work from Chris Floyd, in "Domestic Disturbance: FBI Raids Bring the Terror War Home".

I don't disagree with anything Roberts or Floyd wrote about this story, and I would recommend both columns. But neither of these very fine writers approached the idea that struck me hardest when I saw Roberts' headline.

What's new about the USA being a police state? Why is it suddenly official now?

That the USA is a police state has been, if not officially official, then at least totally bloody obvious, for my entire life -- and the same is true of Roberts, and Floyd, and you (dear reader), and your parents, and their parents. For all our lives, we have lived in a police state that calls itself a democracy, and the cover story has been so effective that even some of our leading dissident writers are now just discovering the truth behind it.

Lest we forget: Forty years ago, in the midst of another generation's undeclared, unjustified, unwinnable and unpopular war, unarmed anti-war protesters were gunned down in broad daylight in public, and not one of the shooters who committed the crime was even tried.

In the decade leading up to those shootings, four civic and political leaders, all of whom posed threats to the established order, were also gunned down in public. The victims included a sitting President and a US Senator, yet no justice was ever served for any of these murders.

From the 1930's through the late 1950's, the nation's "law enforcement" officers brutally crushed anyone they could find who had sympathy for communism, socialism, or any other "-ism" that didn't begin with "capital". None of this is secret. None of it is news.

All through our history, Americans whose skin wasn't quite white enough have been hassled, assaulted and ruthlessly murdered, often by the police whose lives depend on the taxes we all pay, and who are supposed to be protecting all of us. Most of the perpetrators of these crimes have never been brought to justice.

This pattern of official injustice -- supported more often than not by the police themselves -- has been going on for as long as you care to look. It runs as deep as American history itself. Though it may be pleasant to forget it, the USA is nation whose history includes -- nay! is a nation that was built upon -- genocide, slavery, lynching, and other forms of public terror, all with the open support of "the authorities".

The Articles of Confederation, by which the "United States of America" came into being, guaranteed direct democratic representation at the national level, in a government which could be swept from power quite easily when and if the voters of the country were displeased. The most powerful men in the land -- slaveholders, mostly -- found their riches, their status and their privilege in jeopardy, and feared for what they were pleased to call "an excess of democracy".

So they banded together and wrote the Constitution, which set up our current system of "representative" government, under which the President is elected by an Electoral College chosen by the State legislators, rather than directly by the people; under which it takes three election cycles to change the entire Senate; under which countless federal officials -- including every justice on the Supreme Court -- are appointed by the President and approved by the Senate, with nary a word from the House of Representatives, which is, at least in theory, the only part of the federal government over which the voters are meant to have any immediate influence.

Then, through a series of incidents that today would be called "terrorist attacks" (as long as they were perpetrated by Muslims), the authors of the Constitution inflamed enough other powerful men to ensure the ratification of the new Constitution -- quite against the wishes of the "common people" of the day -- setting the course which we now travel, and which the best of us (including Chris Floyd and Paul Craig Roberts) rightfully despise.

Rather than guaranteeing direct democratic representation and fair and equal rights to all citizens, the Constitution set up a federal government with the power to put down "insurrections", and a mandate to protect interstate and international "commerce". In our present-day terms, it empowers a deeply entrenched government running a police state at home to support a commercial empire abroad.

But we would still have the same problem. The federal government would still be owned by the most powerful men in the country, and would still be geared to putting down "insurrections" at home while supporting a "commercial" empire abroad.

That was the whole point of the Constitution in the first place. This is why we are where we are today. As Chris Floyd pointed out some time ago, "the purpose of a system is what it does". And what our current system does, its purpose, is still congruent with the wishes of the "Founding Fathers".

I fear that, if our leading dissident writers continue to miss this point, the best we could possibly accomplish -- even if we all stood together against the abomination that is our federal government -- would be a reversion to the root cause of our current problems.

And that's not going to be good enough.

Good News, Bad News: My Blog Sucks And Will Continue To Do So

It has sucked -- quite vigorously -- for most of the past two and a half years. Mostly it has sucked because I have been incapacitated, first emotionally by the premeditated murder of a close friend, and then physically by two serious injuries from which I am still struggling to recover, one of which limits my typing considerably.

My physical condition is gradually improving, and lately I have been able to do a small amount of "discretionary typing", but my blog continues to suck, and it will do so for some time to come. Now, however, the reasons are different.

I am continuing to spend a large share of my waking hours doing (painful, boring) rehab, but with my "discretionary" time -- here's the good news -- rather than trying to get my blog rolling again, I've been working on something else.

Why is this good news? Because my new project allows me to work with two (very) old friends, pulling together many of the threads we have been trying to weave in the past, and presenting them in a manner which (though I say it myself) long-time readers and newcomers alike will probably find quite refreshing.


On August 23, 2010, Metro Police entered a well-appointed flat at 36 Alderney Street, in the heart of London. In the flat they found an ensuite bathroom, and in the bathtub they found a padlocked bag, and in the bag they found the body of Gareth Williams.

Williams, a brilliant mathematician from Anglesey, Wales, worked in Cheltenham for GQHC, Britain's domestic eavesdropping service. He was living in London on a one-year secondment to MI6, Britiain's Secret Intelligence Service, and the block of flats in which his body was discovered was an MI6 "safe house".

Apparently uninterested in potential national-security angles, the police immediately announced they were looking for clues to Williams' mysterious death in the details of his private life. But they didn't make much headway. A month after his body was found, they still hadn't determined the cause of death, although they had admitted the case was "complex" and "unexplained".

It seemed like a job for Sherlock Holmes and Dr. Watson.

Gareth Williams was buried today -- more than a month after his body was discovered.

I grieve for his parents Ian and Ellen, his sister Ceri, his uncle William Hughes, and all his other relatives and friends.

I cannot imagine what happened to him, or what is hampering the police in their investigation, or what his former colleagues at MI6 and GCQH are thinking ...

Please don't click this link unless you wish to read more: