The World At War: AFRICOM vs. Ghana in the Round of 16 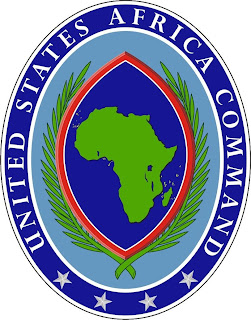 We Are The World, and even as I write, we are preparing for another battle, the next in a month-long series of short, controlled skirmishes which will draw the attention of billions of people, although neither the individual skirmishes nor the entire series have any actual significance. Such is the power of modern marketing.

The imminent clash pits the huge and mighty USA -- which just recently admitted running overt and covert "clandestine operations" in at least 75 "sovereign" nations -- against the small and mostly impoverished African nation of Ghana. Despite the disparity in resources, USA is not considered a "prohibitive favorite". Such is the nature of modern football (which Americans insist on calling "soccer").

Recently, at a family gathering, one of the older women -- a mother of three boys, two of whom joined the Marines as teenagers -- was talking about the Vietnam-era anti-war demonstrators. Many people believe that the anti-war movement forced an end to the war. I wouldn't go quite that far, but at the very least the anti-war movement proved to me that some Americans still had functioning brains and hearts.

I don't see that very much anymore; the brains appear to have turned to mush, and the hearts to stone. I was hoping the old woman was about to say something of a similar nature, but instead, looking back on the protests, she said, "That was so difficult for the parents!"

Given the circumstances, there was little I could say. I certainly couldn't say what I was thinking: "The parents!? It was difficult for the parents?? How do you think it was for the children???"

First we had to throw off all the propaganda we'd been fed by our schools, by our parents, by the teevee and the radio, the movies and the newspapers and all the rest of our so-called "culture"; then we had to bring ourselves face-to-face with the fact that our government had adopted a policy of killing millions of innocent people, who had no means to harm us and no intention of doing so, for fun and profit. It was a most repulsive revelation, especially in the midst of all the Disney-crap we'd been "brought up" on.

But even that wasn't enough, because having learned what we had learned, having taken the stands we had taken, we then had to endure the rejection of our parents: and we saw with our own eyes how the people who had brought us into this world, fed us and held us, taught us and loved us, turned against us when we brought to light the most vital truth of their lives, preferring the deadly fiction to which they were accustomed, and with which they were so much more comfortable. And now, "it was so difficult for the parents". Such is the power of modern American stupidity.

None of this makes any difference, of course, to the billions preparing to tune in to the match between USA and Ghana. Very few of the world's sporting fans seem to know or care whether Ghana is seen by USA as nothing but a tiny component of AFRICOM, which in itself is simply one cog in the Pentagon's plan to rule the world by force. I know people who will be standing and cheering and yelling "USA!! USA!!" all afternoon, but I cannot share -- or understand -- their sentiment. 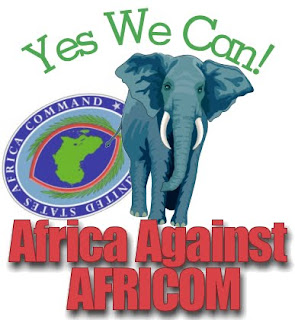 I want ordinary, "decent", "intelligent" Americans to see the unprovoked murder of even one innocent person as an intolerable outrage; then I want them to understand that their country has murdered millions upon millions of innocent people, not just at one time and in one place but repeatedly, all over the world, for decades. And I want them to realize that their chant of "USA!! USA!!" is -- for the rest of the world -- the most obscene of non-violent gestures.

Not that it matters in the slightest to anyone, but it breaks my heart to realize that the country of my birth is a serial mass murderer, and that even despite the horror that is USA, many of the allegedly most intelligent people I know, including elderly and supposedly wise members of my extended family, still support it, while seeing any prospect of facing the truth about it as "difficult for the parents".

I know none of this will happen. But then again this is football, where everything is artificial and nothing matters. Surely a battered old man with a broken heart can have a dream now and then, can't he? Isn't that what the beautiful game is all about?