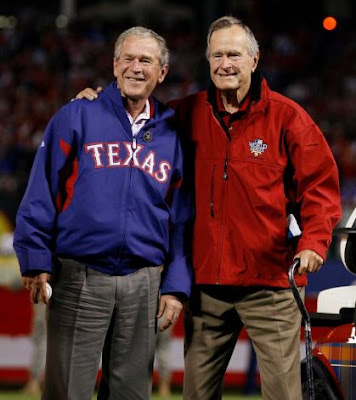 I made a series of tactical errors on Sunday night. Thinking my sons might enjoy some baseball before bedtime, I visited mlb.com to see when the 4th game of the World Series was scheduled to start. The site said "LIVE! NOW!" so I turned on the television. But it was only the pre-game show, so I switched it back off.

About half an hour later, I turned it back on, fully expecting the ballgame to have started, but -- shockingly! -- I was wrong again.

I got the sound first. I heard music playing and the crowd cheering; then the picture came up and I could see that the cheering wasn't for any players, but for a couple of war criminals -- a father and son team who between them had launched multiple wars of aggression, killing uncounted millions of innocent people (so far), while doing untold damage to their own country in a thus-far successful effort to shield their crimes, and who therefore -- being deep in the heart of Texas and all -- had been given the "honor" of throwing out "the first pitch".

I switched the set off again as soon as I saw what was happening: so fast that I only heard one note, and I still don't know what music was being played. For some reason, I keep thinking about that moment, and every time I do, I hear the opening riff of the only song I know that would have been appropriate to the occasion.

I first heard it in 1983, at a lecture/slide show/concert given by the composer/performer, Bruce Cockburn. Bruce had just returned from an eye-opening tour of Central America, and as part of his presentation, he played a new song for us, one he had just finished.

We were in a little ampitheatre, every word was clear, and Bruce's new song took the place apart. It was called "If I Had A Rocket Launcher" and the lyric ran like this:


Here comes the helicopter -- second time today
Everybody scatters and hopes it goes away
How many kids they've murdered only God can say
If I had a rocket launcher...I'd make somebody pay

On the Rio Lacantun, one hundred thousand wait
To fall down from starvation -- or some less humane fate
Cry for Guatemala, with a corpse in every gate
If I had a rocket launcher...I would not hesitate

I want to raise every voice -- at least I've got to try
Every time I think about it water rises to my eyes.
Situation desperate, echoes of the victims cry
If I had a rocket launcher...Some son of a bitch would die

In case you're wondering whether this is all about Bush, I should add: If Barack Obama had thrown out the first pitch, I would have shut it off just as fast, and the juke box in my head would have played exactly the same song.

Please watch and listen as Bruce Cockburn performs "If I Had A Rocket Launcher" with a small band, from 2000, and/or solo, from 2005.