Bush Threatens Iranian People, Tells Them To Reject Their Government 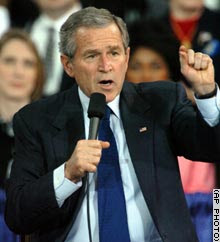 President Bush [Thursday] called on the Iranian people to reject their hard-line government, saying they "can do better" and need not be isolated by a leadership that destabilizes its neighbors and pursues a suspected nuclear weapons program.

One can barely imagine what would happen if the President of Iran were to urge the American people to reject their hard-line government, although there is no doubt that we "can do better" and there is little reason why we need to be isolated by a leadership that destabilizes huge regions of the world and pursues an obvious program of global domination.

Americans "ought to be very concerned about Iran," Bush said. "They're a destabilizing influence. They are a government that has -- its declared policy is very troubling, obviously, when they announce -- when Ahmadinejad has announced that the destruction of Israel is part of his foreign policy. That's something, obviously, we cannot live with. They have expressed their desire to be able to enrich uranium, which we believe is a step toward having a nuclear weapons program."

As a matter of fact, President Ahmadinejad has never announced the destruction of Israel as part of his foreign policy, but the Washington Post doesn't see fit to mention this fact, which only goes to show how irresponsible the "liberal media" can be.

Bush went on to threaten the Iranian people:

Bush added, "My message to the Iranian people is, 'You can do better than this current government. You don't have to be isolated. You don't have to be in a position where you can't realize your full economic potential.' And the United States of America will continue to work with our friends and allies in the Security Council and elsewhere to put you in a position to deny you your rightful place in the world -- not because of our intention; because of your government's intention."

... thus underlining one of the most remarkable and largely unremarked indications of insanity in American foreign policy:

If you suffer under a dictatorial government, the USA will punish you for it.

But if you overthrow it and elect a representative government, the USA will punish you for that, too.
Filed under: economics, Iran, Mahmoud Ahmadinejad
by Winter Patriot on 6:51:00 AM
Newer Post Older Post Home