Over The Top: The March Of The Berlet Brigade

As if the Kennebunkport Warning hadn't already generated enough pointless stupidity, a newly minted "political cartoon" that's been posted at Rense dot Com has added a new twist and opened up another big can of wiggly worms. Here's the cartoon: 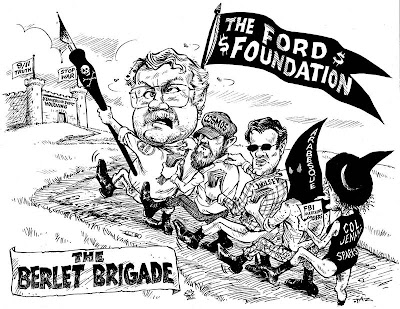 It shows Cosmos, Michael Wolsey, Arabesque and Jenny Sparks, marching in lockstep behind Chip Berlet, carrying a poison pen, a banner advertising the Ford Foundation's money, and marching orders from the FBI (the latter being read by Jenny Sparks, portrayed as the wicked witch of the west).

They're marching toward a castle bearing the name "Kennebunkport Warning" and flying the twin flags of "9/11 Truth" and "Stop War".

The implications couldn't be plainer. The artist is saying "These people are all taking money from the Ford Foundation, working under instructions from the FBI, and spreading vicious lies to undermine the Kennebunkport Warning, in order to prevent the unification of the peace and 9/11-truth movements."

The cartoon echoes charges made recently by Webster Tarpley, who has been under fire for making such allegations against all these people, without showing much evidence to support these charges.

Personally, I support neither the charges nor the cartoon. I have no problem seeing Chip Berlet as a shill for the Ford Foundation. But all those other people? I always argue against guilt-by-association. So I'm not buying it this time, either.

But having said that, I must also say this:

I find it very curious that some of the same people who are most upset at Tarpley, and precisely because of these unsubstantiated charges, were positively apologetic toward Cindy Sheehan and her group, after they made equally unsubstantiated and possibly even more damning charges of their own.

For example: Webster Tarpley is lambasted always and everywhere for having been associated with Lyndon Larouche. Tarpley says the relationship ended -- unhappily -- ten years ago, and he has repudiated Larouche in the bluntest of terms, but this doesn't seem to matter much to some people.

Meanwhile, Ann Wright, a former high-ranking military officer and a former high-ranking diplomat, now sits at the right hand of Cindy Sheehan, and appears to be the silent spider in the middle of the Kennebunkport web. But nobody ever points out that Col. Wright has worked for both the Pentagon and the State Department. You could spend a long time hunting for a repudiation by Ann Wright of her former employers, and in fact I have done so without result, but this doesn't seem to matter much either.

Why? Because Cindy Sheehan and Ann Wright are trustworthy; they have credibility. And Webster Tarpley and anyone who ever associated with him or with Lyndon Larouche are dubious at best; they have no credibility. Therefore, supporting Cindy Sheehan is good for the movement; and supporting Webster Tarpley is bad for the movement.

So if Cindy Sheehan makes an obvious bad move, we hear nothing of it, unless somebody spends days digging. But if Webster Tarpley makes a bad move -- obvious or not -- this is seen as front-page news in some quarters, and the beginning of a story that could go on for days.

In light of this tendency, and in view of the fact that posting this cartoon was a bad move, I feel quite safe in predicting that we have not yet heard the last of this story.

And maybe that's not such a bad thing, in the long run, because a lot of truth remains buried under the Kennebunkport rubble. But I can't help thinking there must be a better way to bring it to the surface.
Filed under: Chip Berlet, gatekeepers, Kennebunkport Warning, Webster Tarpley
by Winter Patriot on 12:34:00 AM
Newer Post Older Post Home