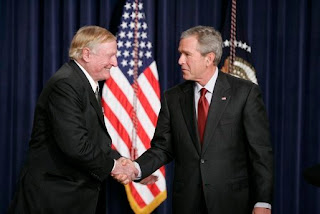 The evil sons of bitches have lost one of their leaders. William F. Buckley is dead at 82.

As the New York Times eulogizes:

Mr. Buckley’s greatest achievement was making conservatism — not just electoral Republicanism, but conservatism as a system of ideas — respectable in liberal post-World War II America. He mobilized the young enthusiasts who helped nominate Barry Goldwater in 1964, and saw his dreams fulfilled when Reagan and the Bushes captured the Oval Office.

If nothing else, Bill Buckley's death gives us one more reason to live a righteous life.

Because now, if you go to hell, you'll have to listen to this pompous asshole for all eternity.
Filed under: William F. Buckley
by Winter Patriot on 12:29:00 PM
Newer Post Older Post Home