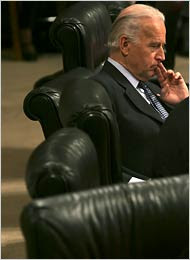 Presidential hopeful Joe Biden stepped onto the presidential racetrack a bit carelessly yesterday and crashed into the first hurdle, then spent the rest of the day trying not to get run over. An inauspicious opening lap if ever there was one.

Fortunately for Mr. Biden, the USA has an exceedingly long presidential race, and his opening lap could be forgotten by next week, let alone next summer.

The changing tides and sudden storms of "political weather" are not usually my "bag", since I'm more of a "political climate" sort of guy, but I couldn't resist the headline at FOX, which read: "Eye on '08: Biden Takes Rap For Inarticulate Comments". Unfortunately the story left me wondering what Biden had said that was deemed "inarticulate". Here's the FOX story in its entirety:

Delaware Sen. Joe Biden jocularly received a verbal lashing Wednesday night on The Daily Show With Jon Stewart. Before The New York Observer interview in which Biden had strong words for New York Sen. Hillary Clinton and former Sen. John Edwards, and described Illinois Sen. Barack Obama as the first mainstream African-American presidential candidate and a 'clean' guy, he told The Philadelphia Inquirer that the lesson he'd learned from his 1988 presidential run was that 'words matter.' Host Stewart reminded him of this lesson and advised Biden to 'take a deep breath' and 'count to 10' before speaking in the future. Biden apologized if he offended anyone, but stood by his position that Clinton and Edwards are wrong on Iraq.

I read it twice and I was thinking: "They're wrong about a whole bunch of other stuff too, Joe. And guess what? So is Obama. So are you. So am I. Nobody's perfect. What's so inarticulate about that?"

Typical FOX coverage. They get you all kinds of upset but you don't even know what it's about.

And it turns out you have to go to a slightly more reliable source if you want to know what Joe Biden said that was deemed "inarticulate". According to Adam Nagourney of the New York Times in Biden Unwraps '08 Bid With an Oops!,

Senator Joseph R. Biden Jr. of Delaware, who announced his candidacy on Wednesday with the hope that he could ride his foreign policy expertise into contention for the Democratic nomination, instead spent the day struggling to explain his description of Senator Barack Obama, the Illinois Democrat running for president, as “the first mainstream African-American who is articulate and bright and clean and a nice-looking guy.”

OK. Now I get it. Horribly inarticulate, now that I think about it. But here's the part I don't understand: 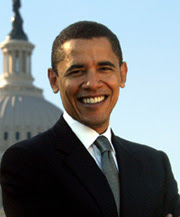 Mr. Biden, [...] said that he had been “quoted accurately.” He volunteered that he had called Mr. Obama to express regret that his remarks had been taken “out of context,” and that Mr. Obama had assured him he had nothing to explain.

Kudos to Joe Biden for admitting he had been quoted accurately. Too many politicians would have tried to weasel out of it. We've never been stay the course. But I digress.

On the other hand, why is Joe Biden apologizing to Barack Obama? What's the problem with being called "articulate and bright and clean and nice-looking"? Isn't that good enough? Heck, I'd be happy to be called any one of the four!

The problem, of course, is that by praising Obama in such a way, Biden could have given the impression that in his opinion all previous mainstream African-American politicians were inarticulate and/or dim-witted and/or dirty and/or ugly. And that was probably not the impression he intended to convey. (Or if it was, he hasn't got very many laps left before he crashes into a wall!)

For his part, Barack Obama handled things fairly well, or so it seemed at first:

Mr. Obama said in an interview, “I didn’t take it personally and I don’t think he intended to offend. [...] But the way he constructed the statement was probably a little unfortunate.”

It was definitely more than a little unfortunate, IMVHO. But then what do I know?

It turned out that not everyone was happy with Mr. Obama's comments, and he elaborated (or changed his tune slightly, as you prefer):

Later in the day, with Mr. Biden coming under fire from some black leaders, Mr. Obama issued a statement that approached a condemnation. “I didn’t take Senator Biden’s comments personally, but obviously they were historically inaccurate,” he said. “African-American presidential candidates like Jesse Jackson, Shirley Chisholm, Carol Moseley Braun and Al Sharpton gave a voice to many important issues through their campaigns, and no one would call them inarticulate.”

I wouldn't call them dim-witted, dirty or ugly either.

And neither would you!