Chris Floyd's site has been hacked too much; it's up again at the moment but who knows for how long?

Here, by kind permission of the author, is his latest piece.

I. One Tick Closer to Midnight 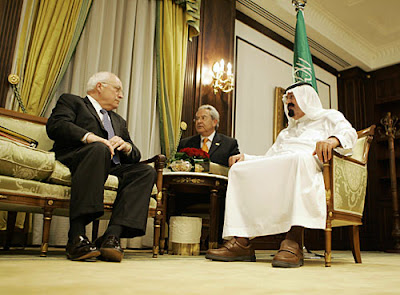 Last Friday, Dick Cheney was in Saudi Arabia for high-level meetings with the Saudi king and his ministers. On Saturday, it was revealed that the Saudi Shura Council -- the elite group that implements the decisions of the autocratic inner circle -- is preparing "national plans to deal with any sudden nuclear and radioactive hazards that may affect the kingdom following experts' warnings of possible attacks on Iran's Bushehr nuclear reactors," one of the kingdom's leading newspapers, Okaz, reports. The German-based dpa news service relayed the paper's story.

Simple prudence -- or ominous timing? We noted here last week that an American attack on Iran was far more likely -- and more imminent -- than most people suspect. We pointed to the mountain of evidence for this case gathered by scholar William R. Polk, one of the top aides to John Kennedy during the Cuban Missile Crisis, and to other indicators of impending war. The story by Okaz -- which would not have appeared in the tightly controlled dictatorship without approval from the top -- is yet another, very weighty piece of evidence laid in the scales toward a new, horrendous conflict.

We don't know what the Saudis told Cheney in private -- or even more to the point, what he told them. But the release of this story now, just after his departure, would seem to be a clear indication that the Saudis have good reason to fear a looming attack on Iran's nuclear sites and are actively preparing for it.

II. A Nuclear Epiphany in Iran?

And they certainly should be bracing themselves. A U.S. attack on Iran will come suddenly, and if it is indeed aimed at destroying Iran's nuclear capabilities -- a "threat" being talked up again with new urgency by both Cheney and Bush lately -- it has the potential for unimaginable consequences. As we noted here in a previous piece:

Twelve hours. One circuit of the sun from horizon to horizon, one course of the moon from dusk to dawn. What was once a natural measurement for the daily round of human life is now a doom-laden interval between the voicing of an autocrat's brutal whim and the infliction of mass annihilation halfway around the world.

Twelve hours is the maximum time necessary for American bombers to gear up and launch an unprovoked sneak attack – a Pearl Harbor in reverse – against Iran, the Washington Post reports. The plan for this "global strike," which includes a very viable "nuclear option," was approved months ago, and is now in operation. The planes are already on continuous alert, making "nuclear delivery" practice runs along the Iranian border, as Sy Hersh reports in the New Yorker, and waiting only for the signal from President George W. Bush to drop their payloads of conventional and nuclear weapons on some 400 targets spread throughout the condemned land.

And when this attack comes – either as a stand-alone "knock-out blow" or else as the precusor to a full-scale, regime-changing invasion, like the earlier aggression in Iraq – there will be no warning, no declaration of war, no hearings, no public debate. The already issued orders governing the operation put the decision solely in the hands of the president: he picks up the phone, he says, "Go" – and in twelve hours' time, up to a million Iranians could be dead.

This potential death toll is not pacificist hyperbole; it comes from a National Academy of Sciences study sponsored by the Pentagon itself, as The Progressive reports. (Although Bush's military brass like to peddle the public lie that "we don't do body counts" of the enemy, in reality, like all good businessmen they keep precise accounts of their production outputs: i.e., corpses.) The Pentagon's NAS study calibrated the kill-rate from "bunker-busting" tactical nukes used to take out underground facilities – such as those which house much of Iran's nuclear power program.

Another simulation by scientists, using Pentagon-devised software, was even more specific, measuring the aftermath of a "limited" nuclear attack on the main Iranian underground site in Esfahan, the magazine reports. This small expansion of the Pentagon franchise would result in stellar production figures: three million people killed by radiation in just two weeks, and 35 million people exposed to dangerous levels of cancer-causing radiation in Afghanistan, Pakistan and India. Bush has about 50 nuclear "earth-penetrating weapons" at his disposal, according to the Union of Concerned Scientists.

Nor is the idea of a nuclear strike on Iran mere "liberal paranoia." Bush himself pointedly refused to take the nuclear option "off the table" this week. But what's more, Bush has made the use of nuclear weapons a centerpiece of his "National Security Strategy of the United States," issued last month, The Progressive notes. While reaffirming the criminal principle of "pre-emptive" attacks on perceived enemies which may or may not be threatening America with weapons they may or may not possess, Bush declared that "safe, credible and reliable nuclear forces continue to play a critical role" in the "offensive strike systems" that are now a key part of America's "deterrence."

In the depraved jargon of atomic warmongering, a "credible" nuclear force is one that can and will be used in the course of ordinary military operations. It is no longer to be regarded as a sacred taboo. This has long been the dream of the Pentagon's "nuclear priesthood" and its acolytes, going back to the days of Hiroshima and Nagasaki. For decades, a strong faction within the American power structure has been afflicted with a perverted craving to unleash these weapons once more. An almost sexual frustration can be discerned in their laments as time and again, in crisis after crisis, their counsels for "going nuclear" were rejected – often at the very last moment. To justify their abberant desire, they have relentlessly demonized an ever-changing array of "enemies," painting each one as an imminent, overwhelming threat, led by "madmen" in thrall to pure evil, impervious to reason, fit only for destruction. Evidence for the "threat" is invariably exaggerated, manipulated, even manufactured; this ritual cycle has been enacted over and over, leading to many wars – but never to that ultimate, orgasmic release.

Now this paranoid sect has at last seized the commanding heights of American power...they have found a most eager disciple in the peevish dullard strutting in the Oval Office. Under their sinister tutelage, Bush has eviscerated 40 years' worth of arms control treaties; officially "normalized" the use of nuclear weapons, even against non-nuclear states; rewarded outlaw proliferators like India, Israel and Pakistan; and is now destroying the last and most effective restraint on the spread of nuclear weapons: the Nuclear Non-Proliferation Treaty (NPT).

The treaty guarantees its signatories – such as Iran – the right to establish nuclear power programs in exchange for rigorous international inspections. But Bush has arbitrarily decided that Iran – whose nuclear program undergone perhaps the most extensive inspection process in history – must end its lawful activities. Why? Because the country is led by "madmen" in thrall to pure evil, impervious to reason, who one day may or may not threaten America with weapons they may or may not have.... 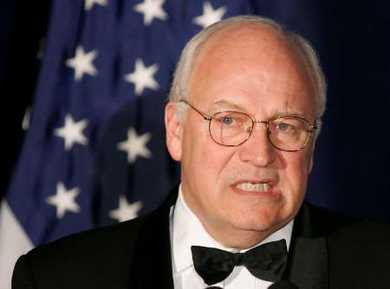 So the NPT is dead. As with the Geneva Conventions and the U.S. Constitution, it now means only what Bush says it means. Force of arms, not rule of law, is the new world order. The attack on Iran is coming...The obvious, murderous insanity of such a move in no way precludes its implementation by this gang – as their invasion of Iraq clearly shows.

The nuclear sectarians have waited decades for this moment. Such a chance may never come again. Will they let it pass, when with just a word, in just twelve hours, they can see their god rising in a pillar of fire over Persia?

Click here for the article in its original context, with live links.
File under: Chris Floyd, Dick Cheney, Iran, Saudi Arabia
Email ThisBlogThis!Share to TwitterShare to FacebookShare to Pinterest
Posted by Winter Patriot