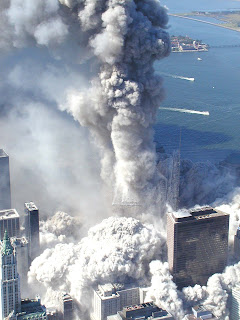 The BBC is reporting on an "analysis" by Dr. Keith Seffen, a "UK engineer" which "demonstrates that once the collapse of the twin towers began, it was destined to be rapid and total."

According to this analysis, the official story of the buildings' collapse amounts to "a fair assumption in terms of how the building fell."

"One thing that confounded engineers was how falling parts of the structure ploughed through undamaged building beneath and brought the towers down so quickly," said Dr Seffen.

He added that his calculations showed this was a "very ordinary thing to happen" and that no other intervention, such as explosive charges laid inside the building, was needed to explain the behaviour of the buildings.

Questions leap to mind: Is it really a very ordinary thing? Has the paper been peer-reviewed? How much sense does the paper make? And where is it?

The findings are published in the Journal of Engineering Mechanics.

and the BBC page links to the Journal's website.

But a search of the site provides no evidence of any such report, nor any indication that the author, Dr. Keith Seffen, has ever published anything there at all.

And a Google search for "Keith Seffen" and "WTC" finds no relevant matches, just the BBC article and a diary at Daily Kos which calls Dr. Seffen's study "proof", even though the study -- not to mention the "proof" -- is nowhere to be found.

Draw your own conclusions.

UPDATE: The BBC report to which I linked above has been changed.

Where it once said:

The findings are published in the Journal of Engineering Mechanics.

The findings are to be published in the Journal of Engineering Mechanics.

A verbatim copy of the prior version can be found here. Another copy appears at the bottom of this page. And the discussion continues here.
Filed under: 9/11, BBC, Cambridge, JEM, Keith Seffen, manure
by Winter Patriot on 12:03:00 AM
Newer Post Older Post Home