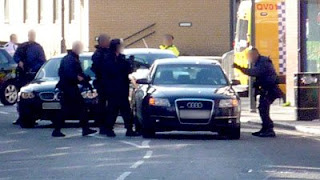 On April 8, 2009, amid a blaze of publicity, police in the north of England arrested 12 men who were Officially Described As (ODA) "terror suspects".

England's Prime Minister, Gordon Brown, congratulated the police and intelligence agencies on having broken up "a very big plot".

Police spokesmen were mostly mum but anonymous sources told the British media that the authorities had foiled an imminent attack which would have involved multiple suicide bombers.

Eleven of the suspects were ODA Pakistani nationals living in the UK on student visas. Sources told the British papers the suspects came from the "lawless tribal region" of northwest Pakistan and were linked with the al Qaeda terrorists whose global headquarters is ODA in the same region.

Police said they had been watching the suspects for several months in an anti-terror operation code-named "Operation Pathway", and that to the best of their knowledge the alleged terrorists had not yet selected a target. Many potential targets were suggested in the media, nonetheless.

And no dates were confirmed either, but the police were ODA taking no chances with public safety, especially with the Easter weekend approaching. 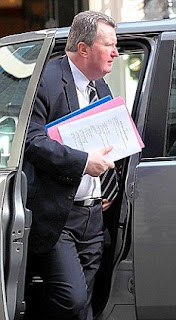 The arrests, we were told, had been planned for the morning of April 9th, but had to be moved forward by about 12 hours because of what was ODA a "blunder" by Britain's most senior anti-terror officer, Robert Quick.

Quick, who at the time was Assistant Commissioner of the Metropolitan London Police, arrived at No. 10 Downing Street for a meeting with the Prime Minister on April 8th and emerged from his car carrying a couple of file folders.

Outside the folders was a document ODA "secret", outlining the planned arrests in which the "Operation Pathway" suspects would be taken.

Photographers are always camped outside the Prime Minister's office, of course -- with digital cameras and telephoto lenses. And Bob Quick was ODA realizing the implications of his "blunder" immediately. The British authorities moved promptly to suppress publication of any photos of the "secret" document, and they also moved promptly against the suspects.

And Bob Quick promptly tendered his resignation, which was promptly accepted. After 30 years on the force and more than a year as the top anti-terror officer, he retired, supposedly in disgrace but with a six-figure pension. And at the same time, the anti-terror SWAT teams went to work.

Normally, the police prefer to arrest suspects in their homes, while they're sleeping. No muss, no fuss, no resistance. But in this case, with the operation suddenly public, the police were ODA "forced" to take the suspects from public places, in broad daylight, with considerable muss and fuss. 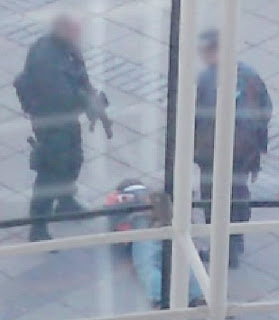 Thus two men were taken from a university library in Liverpool. According to one of them, police forced them to the floor, tied their hands behind their backs, and held machine guns to their heads for an hour before taking them away.

In Clitheroe, a small town about an hour north of Manchester, more than a hundred armed officers surrounded a home improvement supply store which was preparing for its grand opening, and arrested two men who were working there as security guards. (The store opened the next day as planned.)

Another suspect was taken from his car, which was stopped at gunpoint on the highway. And so on. All twelve suspects were arrested within an hour, which gives us an indication of how serious the alleged plot was considered to be, and how closely the suspects were being watched.

With the suspects safely out of the way, the search began for what was ODA "the terrorists' bomb factory". Police searched the suspects' apartments, and found nothing: no weapons, no ammunition, no bombs, no bomb-making equipment, no bomb-making ingredients.

Then they temporarily relocated some of the suspects' neighbors and started searching whole apartment buildings. Again they came up with nothing. 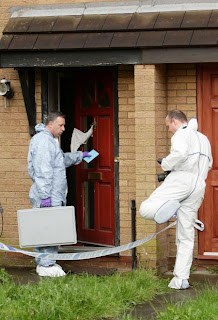 Next they took the suspects' computers, books, notes and other personal items for forensic analysis, and found nothing incriminating in any of them: no plans, no hints of plans, no dates, no targets, nothing.

And so, within two weeks of the arrests, all the suspects were ODA "released".

But even though they are now ODA "released", eleven of the twelve -- the Pakistani students -- are still in prison. And rather than facing criminal charges pertaining to terrorism, they face deportation, for reasons ODA related to national security.

The Pakistani students have appealed against the deportation order, hoping to remain in Britain and continue their studies. So they won't be leaving without at least a hearing.

And since they are ODA a serious threat to the national security of Great Britain, their deportation hearings will take place in secret. So whatever evidence the authorities may have against them which is not admissible in open court will apparently be presented behind closed doors, if at all.

According to a recent report, the men who were ODA terror suspects have requested anonymity, so the British press may not publish their names, not that it's going to make much difference. The police have never released an official list of the names of the people who were arrested. And the news media don't usually try for names anyway; they've simply been referring to the "Easter Bombers" or the "Manchester Terror Plot".

Aside from leaving some families in Pakistan wondering whether their sons have been arrested, the failure by police to name the people they have arrested, along with the prospect of having the rest of the drama played out behind closed doors, leads a skeptical observer to wonder whether there's more here than meets the eye -- or maybe less!

The stunning security breach ODA "Quick's blunder" is only one fascinating and illuminating aspect of the "Operation Pathway" story. There are many others. In future installments of this series, I intend to explore as many of them as possible. But first, a few words about the timing of the arrests and the timing of the "releases".

On April 1st, a week before the alleged plotters were arrested, a high-profile G20 meeting began in London. Protesters took to the streets, and so did the police, of course. The police used a technique they call "kettling", in which they cordon off part of the city and refuse to let anyone (except other policemen) into or out of the cordon.

So people were trapped in the heart of the city for hours without food or water, with no sanitary facilities, surrounded by surly police with attack dogs and truncheons. It was almost as if the police were trying to provoke violence in a peaceful protest.

There are other reasons to suspect the police of trying to provoke the crowd. A Member of Parliament has brought to light reports of another incident involving two "protesters" who were throwing bottles at police and urging others to do the same. When these two individuals were accused by actual protesters of being police agents provocateurs, they made straight for the cordon, presented some identification to the police there, and disappeared through the police line.

When Ian Tomlinson finished work that day, he found himself inside the cordon. Tomlinson, a 47-year-old newspaper seller, started walking home. But he never made it.

After a quick police autopsy, Tomlinson's sudden death was ODA caused by a heart attack, and the story was mostly ignored by most of the British papers. The police released a statement explaining that when Tomlinson suffered his heart attack, police tried to come to his assistance but were prevented from reaching him by protesters throwing bottles. One newspaper even accused the protesters of throwing bricks! But none of this was true.

Tomlinson's family requested a second autopsy, which ascribed his death to internal bleeding. And the falsity of the police account of Tomlinson's death was convincingly proven on April 7th when The Guardian published excerpts from testimonies of numerous witnesses who all described something very different.

In addition, The Guardian posted on its website a video showing Ian Tomlinson walking along with his hands in his pockets, and being hassled by police, then suddenly knocked to the pavement by a policeman attacking him from behind.


The video continues, showing protesters attempting to help Tomlinson, while police stand by with their shields and dogs. It shows no flying bottles, nobody throwing bricks, and no attempt whatsoever by the police to rush to Tomlinson's assistance.

By the most amazing coincidence, less than 24 hours after the video appeared online, Bob Quick appeared at the front door of No 10, with Operation Pathway's secrets on display.

So if the police don't have enough evidence to lay charges within a week of the arrests, they must appear before a judge and try to convince him that there is reason to believe another week's detention would allow the police to find the evidence they need to support criminal charges.

After a second week, the process must be repeated, and it can be repeated again after the third week, but each time the judge must be convinced that the evidence collected so far justifies holding the suspects for another seven days. And after four weeks, the deadline is immovable: the police must either charge the suspects or release them.

Fairly often in Britain, people ODA "terror suspects" are held for slightly less than two weeks before being released without charges. Usually this means the police have brought nothing to the table at the end of the first week, and the judge has granted them a second week, but told them not to bother coming back unless they find some evidence.

It appears that the same thing may have happened in this case. But it's hard to tell. This much is certain: if police did appear before a judge after the second week, he was not impressed with what they brought with them.

And here we come to another amazing coincidence: even though the police had enough on all these suspects to make a big splash with very public arrests, they didn't have enough on any of them, even after two weeks of searching, to convince a judge that holding any or all of them for another week would likely result in the discovery of incriminating evidence.

In this post I haven't provided any quotes or links, but future installments of this series will look at various facets of the story in great detail and will include plenty of quotes, and dozens if not hundreds of links.

If you wish to read more about the case in the meantime, you might enjoy a visit to my newest other blog, "Operation Pathway". There you will find more than 200 news articles, and links to many more news and blog items.

Coming soon: detailed articles about Quick's "blunder", the surveillance and arrests of the suspects, the alleged al Qaeda connection, and much more.

Next: Pathway To Darkness, Part 2: Babar Ahmad and the TSG