QUETTA: Protestors blocked roads and highways across Balochistan as police continued their crackdown on nationalist leaders on Sunday.

Nationalist parties called the wheel-jam strike to protest at the arrest of Sardar Akhtar Mengal, the Mengal tribal chief and president of the Balochistan National Party, and hundreds of other Baloch activists over the last 10 days.

A BNP spokesman termed Sunday’s strike a “grand success”. He claimed that police had detained 300 Baloch workers, including the 70-year-old father of a party leader, in Quetta alone and injured 60 protestors during the last three days.

Traffic remained suspended in most parts of the province, including large parts the provincial capital Quetta. Protestors blocked the national highway, disrupting Balochistan’s road links with the rest of the country.

This has been simmering for quite some time; I've been following it from a huge cold distance, trying to keep tabs on the major points and looking for an opportunity to blog about it. Now that there's nothing else happening in the world ... ahem ... The protests were well-organized, judging from reports from various cities: 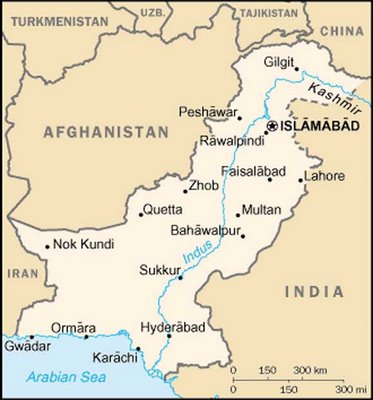 In Baloch-dominated parts of Quetta, BNP supporters blocked roads, including Sariab Road, and pelted stones at passing vehicles. The Quetta-Chaman road was also blocked in Kuchlak, on the outskirts of Quetta. BNP supporters threw stones at the police when the latter tried to open the road. The police later arrested Malik Abdul Majeed Kakar, Quetta district president of the BNP, along with ten party workers at around 1:00pm.

There was a complete strike in Khuzdar, home district of Sardar Mengal. Protestors blocked the Quetta-Karachi highway and chanted slogans against the detention of Baloch leaders and demanded their immediate release. Policed detained Latif Baloch, BNP secretary general for Khuzdar tehsil, and a worker named Siraj Ahmed. “They were later shifted to Khuzdar Central jail,” a source told Daily Times.

The Quetta-Taftan highway was completely blocked in Dalbandin district, leaving hundreds of trucks and vehicles stranded. A shutter down and wheel jam strike paralysed daily life in Kalat. Three BNP leaders - Mohammad Imran, Abdul Haleem and Naimatullah - were detained by the police under the Maintenance of Public Order Ordinance. The protestors also broke the windscreens of several vehicles which defied the wheel jam strike call. 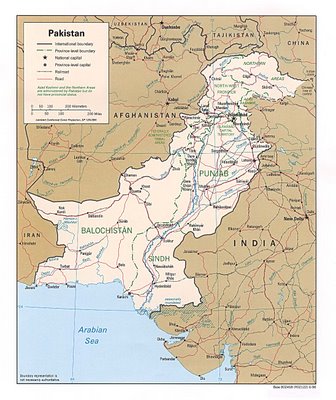 It was also fairly widespread.

The strike was also observed, at least partially, in the Pashtoon-dominated areass of Loralai, Panjgur, Turbat, Noshaki, Mustung, Gwadar and Hub.

Police started the crackdown on Baloch leaders days before they planned a long march across the province starting from Gwadar. The aim of the march was to protest against the killing of tribal chief Nawab Akbar Bugti, the military operations in the province, and the construction of cantonments and major development projects in Balochistan.

The last time I blogged about Balochistan, pipelines were exploding. That was in October.

The last time I was tempted to blog about Balochistan, Bugti’s son had been booked for treason, and Saleem Shahid had written about it in Pakistan's Dawn:

QUETTA, Nov 22: The Sariab police have registered a treason case against Nawabzada Jamil Bugti, son of Baloch leader Nawab Akbar Bugti, for speaking against the army and the government in his press conference last month.

"The registration of the case is another act of victimisation of the Bugti family," Mr Kanrani said in a statement, adding that the move and operations would not force the Bloch people to give up struggle to protect the coast and resources of Balochistan.

He demanded withdrawal of all fake cases against political leaders and workers and said that instead of using force against the people of Balochistan and hurling threats at them, the government should recognise their legitimate rights over the coast and resources of Balochistan.

But it was November 22nd and I had already planned something for the day, so I said nothing about it at the time.

The following day The Hindu had me confused, saying: "Case registered against Bugti grandson", but all my other sources (including Wikipedia) say Nawabzada Jamil Bugti is Nawab Akbar Bugti's son.

There was more detail that same day in a report from Mujahid Ali, correspondent for Gulf News: Treason case slapped on slain leader's son

Karachi: Police have lodged a case of treason against a son of slain tribal leader Nawab Akbar Bugti for allegedly speaking against the country and its armed forces, an official said yesterday.

Jamil Bugti had bitterly criticised the army and the country at a press conference in Quetta recently.

The government says that such kind of language, which attacks solidarity and unity and fans extremism, cannot be tolerated.

Savor with me the enlightened attitude toward freedom of speech emanating from the country that is supposed to be our main Asian ally in the so-called war against so-called terrorism.

"We have registered a case against Jamil Bugti for his November 6 press conference held at the residence of a former Balochistan chief minister Mir Humayun Marri," the Balochistan government spokesman said by telephone from Quetta.
...
Nawab Akbar Bugti was killed along with several of his associates in the mountains of Kohlu in an operation by the security forces. 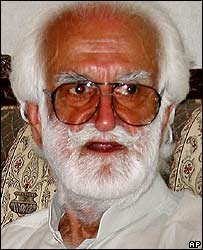 I seem to remember a long detailed post on that occasion as well.

Since his death armed attacks on government targets have dropped.

However, tribal militants continue to carry out sporadic bombings at various places in the province.

I find all this quite fascinating. But I wonder about my readers.

Should I write about Balochistan more? Or are you tired of it already?

If not, you may wish to read some other recent news stories about the strike in Balochistan (and I'll throw in a few quotes along the way if you don't mind):

Ashraf was arrested in Gwadar along with Habib Jalib, secretary general of the Balochistan National Party (BNP), when police dispersed a crowd on Thursday that had gathered for the BNP’s ‘Lashkar-e-Balochistan’ march.
...
The government has expelled all key Baloch leaders from Quetta, but it has not yet given a reason for the crackdown on Baloch leaders.

QUETTA, Dec 2: The shutterdown strike call given by the Balochistan National Party-Mengal (BNP-M) against the arrest of its leaders and workers received a mixed response in Quetta and other parts of the province on Saturday.

However, a majority of the shops at Jinnah road remained closed, while a complete shutterdown was observed till afternoon at Sariab road, Brewery road, Jail road and on the outskirts of the provincial capital.
...
WHEEL JAM CALL: The leadership of BNP-M has called for a wheel jam strike on Sunday.

“We are protesting against the massive arrests of party leaders and workers,” said Rauf Mengal, a central BNP-M leader in a statement issued here on Saturday.

Despite the arrests, long march would be staged as per the announced programme, he said.

He demanded of the government to “immediately release Sardar Akhtar Mengal and hundreds of party workers and local leaders arrested by police from different areas of Balochistan.”

Over the last week, police arrested hundreds of workers of the Balochistan National Party including all of its top leadership as they planned to set out on a protest march across the province.

But the BNP had to abandon the march after its leadership, including president Akhtar Mengal, vice-president Jehanzaib Jamaldini and secretary-general Habib Jalib Baloch were all put under house arrest and between 400 to 600 other activists jailed.

In response to the arrests, the BNP and its allies including the Baloch Students' Organisation called a "shutter-down" strike throughout the province on Saturday, which evoked mixed response, and a vehicle strike on Sunday.

And there's more from the same source, with portents of storms to come:

Baloch nationalist parties had planned the 700-km march, called Laskhar-e-Baloch, through the province to protest against the Federal Government's policies, including the killing of Nawab Bugti in a military operation in August, the setting up of military cantonments in the Balochistan and against "mega-projects" like Gwadar port which they see as holding little benefits for the local people.

"We are a democratic party, but those who want to show their strength through peaceful methods are discouraged. Democracy in Pakistan is only for those who support the military," Mr. Mengal told local journalists over telephone from his home, where he is under detention.

Alongside the political unrest, militants have been at it with unfailing regularity.

The protests and the government action come ahead of a planned visit by President Musharraf to the province early next week. Mr. Mengal said his party and its supporters would ensure an "unwelcome" for the President.

When Gen. Musharraf visited Balochistan on November 16 and 17, there was a province-wide shutdown.