All Eyes On Iran After False Flag Attack In Karbala 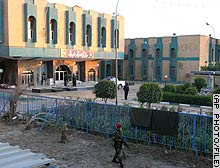 Unnamed officials from two different US government agencies have told CNN that the Pentagon is looking at possible Iranian ties to a "brazen attack" on a meeting in Karbala which left five American troops dead.

According to CNN, Pentagon officials are looking at whether the attack was "carried out by Iranians or Iranian-trained operatives". CNN adds:

Both officials [...] agreed this possibility is being looked at because of the sophistication of the attack and the level of coordination.

Well forgive me for asking, but...

Since when have Iranians or Iranian-trained operatives been known for their "sophistication of attack" or "level of coordination"?

Have Iranians or Iranian-trained operatives ever conducted an attack which was notable for its "sophistication of attack" or its "level of coordination"?

And why am I the only one asking these questions?

If the Bush administration were not so obviously eager to attack Iran, and if a lot of other things were different too, the American media might ask the same sorts of questions.

In fact, the American media might be seen as brave if it dared to mention the name of the intelligence agency which is famous for "sophistication of attack" and "level of coordination".

Such a report might even be seen as heroic, because that intelligence agency belongs to a country which has been doing everything in its power to drag the USA into a war with Iran.