No Photos, Please: Marines Gun Down Civilians In Afghanistan 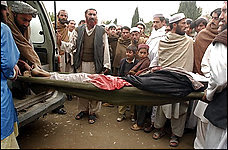 A suicide bomber detonated a car full of explosives near a US convoy near Jalalabad, Afghanistan, on Sunday, injuring an American Marine.

According to multiple witnesses, Marine Special Operations Forces replied by firing at civilians along a six-mile stretch of a crowded highway, killing motorists and pedestrians and sparking protests involving several hundred Afghanis.

Here's Amir Shah of the AP in the Washington Post:

Nine witnesses -- including five Afghans recuperating from bullet wounds in the hospital -- told The Associated Press that U.S. forces fired indiscriminately along at least a six-mile stretch of one of eastern Afghanistan's busiest highways -- a route often filled not only with cars and trucks but Afghans on foot and bicycles.

"They were firing everywhere, and they even opened fire on 14 to 15 vehicles passing on the highway," said Tur Gul, 38, who was standing on the roadside by a gas station and was shot twice in his right hand. "They opened fire on everybody, the ones inside the vehicles and the ones on foot."
...
"When we parked our vehicle, when they passed us, they opened fire on our vehicle," said 15-year-old Mohammad Ishaq, who was hit by two bullets, in his left arm and his right ear. "It was a convoy of three American Humvees. All three humvees were firing around."

A US spokesman was quick to allocate the blame for the atrocity:

"We regret the death of innocent Afghan citizens as a result of the Taliban extremists' cowardly act," Accetta said in a statement. "Once again the terrorists demonstrated their blatant disregard for human life by attacking coalition forces in a populated area, knowing full well that innocent Afghans would be killed and wounded in the attack."

Pentagon spokesmen always say things like "terrorists demonstrated their blatant disregard for human life" whenever US forces demonstrate their regard for human life by firing at unarmed civilians. Your cold correspondent has not been able to find any independent reports corroborating the spokesman's assertion that the Americans were being fired upon at all, let alone from multiple directions.

Two senior provincial Afghan officials [...] said they had found no evidence to corroborate the U.S. military's claim that militants fired on the Americans. An AP reporter who spoke to more than a dozen witnesses could not find anyone who said they saw or heard incoming militant gunfire.
...
Akhtyar Gul, who ran outside his home after the suicide bombing, said he saw American troops firing in many directions, and that some bullets struck his wall. He said he saw a woman working in a nearby field struck by American gunfire.

"There was nobody on the street, nobody on the road to fire on the Americans," said Gul. "The only firing that came toward us was from these American vehicles."

As reported by the Chicago Tribune:

As the U.S. troops fled, they treated every car and person along the busy highway as a potential attacker, said Mohammad Khan Katawazi, the district chief of Shinwar in Nangarhar province.

"I saw them turning and firing in this direction, then turning and firing in that direction," Ahmed Najib, a 23-year-old hit in the shoulder by a bullet, said of the U.S. forces. "I even saw a farmer shot by the Americans."
...
At the Jalalabad hospital, several victims said the American convoy approached them on the highway and opened fire. As the convoy neared, many cars pulled to the side of the road, but the vehicles still were hit by gunfire, the wounded said.

Mohammad Karim, an 18-year-old employee at a hotel near the blast site, said he ran outside after the explosion and saw U.S. forces fire a stream of bullets at a four-wheel drive vehicle.

"I ran to the vehicle to see how many people were inside. We found three dead bodies, and one wounded, but he was also in a very critical condition," Karim said. "All four people were from one family."

Don't expect to see any photos of the massacre.

The freelance photographer, Rahmat Gul, said a U.S. soldier took his camera and deleted the photos, saying he didn't have permission to take them.

The Indy Star has more on this (censorship) angle:

A freelance photographer working for The Associated Press and a cameraman working for AP Television News said a U.S. soldier deleted their photos and video showing a vehicle in which three people were shot to death about 100 yards from the suicide bombing. The AP plans to lodge a protest with the U.S. military.

"When I went near the four-wheel drive, I saw the Americans taking pictures of the same car, so I started taking pictures," said the photographer, Rahmat Gul. "Two soldiers with a translator came and said, 'Why are you taking pictures? You don't have permission.' "

It wasn't clear why the accredited journalists would need permission to take photos of a civilian car on a public highway.

Gul said the U.S. troops took his camera, deleted his photos and returned it to him.

Chances are, this story will be quickly buried under the stories of tomorrow's atrocities.

Oh what am I thinking? It's already buried!

A NATO airstrike destroyed a mud-brick home, killing nine people from four generations of an Afghan family during a clash between Western troops and militants, Afghan officials and relatives said Monday.