Police Seize Huge Cache Of Explosives From Colorado Home, But Say It's Not Enough For An Act Of Terrorism 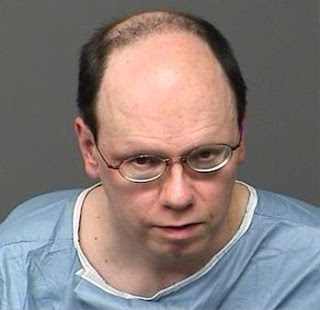 A Colorado man is free on $50,000 bond after a police search of his house discovered a cache of weapons, explosives and volatile chemicals.

Ronald Swerlein of Longmont, CO, attracted the attention of his neighbors by setting off explosions in his garage. Police had been seeking tips after several small homemade explosives were found in a local parking lot nearly three weeks ago.

A police search of the Swerlein home turned up hundreds of volatile chemicals and other weapons, as well as books about bomb-making and revenge.

Swerlein says he's been experimenting with various chemicals to use as rocket fuel.

According to reports from Colorado, police confiscated nitroglycerin, ammonium nitrate, PETN, thermite, and sodium azide; an early report from Colorado said that none of these are used as rocket fuels. [* But this remark may have been interpreted -- in any case the assertion has been convincingly disputed and there's an important update below.] Police also discovered laboratory-grade glassware worth thousands of dollars.

Ammonium nitrate is the basic ingredient in so-called fertilizer bombs; PETN is an ingredient in plastic explosives; sodium azide produces a toxic gas when it comes into contact with metal; and nitroglycerin is a well-known (and extremely unstable) liquid explosive. Thermite, as most 9/11 researchers know, can be used to cut steel and may have been involved in the demolition of the three World Trade Center buildings which disintegrated on September 11, 2001.

Longmont Police Sgt. Tim Lewis said the police had seized "cartloads of weapons ... more than I have ever seen in our armory."

Despite the size of the cache and the volatility of the chemicals involved, Sgt. Lewis told reporters that Swerlein had not created enough chemical explosives “for a terrorist action,” although he did have enough to damage his home and others in his neighborhood.

Sgt. Lewis also said, "This investigation is still in its infancy. We're still trying to determine what his intent was."

Considering that the perpetrators of the most extravagant terrorist attack ever committed on American soil were allegedly armed only with box-cutters, it is incomprehensible that a cache of weapons and explosives larger than the Longmont police have in their armory could be described as insufficient for a terrorist action.

How much nitroglycerin does one need to commit an act of terrorism? Or does that depend on one's religion or the color of one's skin?

And why has this case attracted so little national attention? Or does that depend on religion and skin color, too?

Apparently my original sources and I were wrong about which substances confiscated from Ronald Swerlein are actually used as rocket fuels.

I've received a well-documented (and most welcome) email from a model rocket enthusiast, who says:

Ammonium Nitrate is a major component in the making of rocket fuels. This is common knowledge throughout the pyrotechnic community.

Nitroglycerine is commonly used in conjunction with Nitrocellulose to make many different types of propellants for firearms and rockets.

Thermite, a mixture of Iron Oxide and Aluminum powder (other mixtures similar to this do exist), is also used in high performance rocket fuels.

I didn't know any of this but the links appear to be solid. The email continues:

As for the PETN and Sodium Azide, those are definitely not used in rocket fuels and are illegal.

Asked for further details, my source (who seems more credible all the time) replied:

My former job required me to handle explosives on a regular basis. PETN is made from the nitration of pentaerythritol and is used in the military as a breaching explosive and in detonation cord. You can find tons of information on it here.

Sodum Azide is not used in the explosive industry, as it is very sensitive and toxic. It does, however, have explosive properties and is labeled as a high explosive. It is also used to make airbags. More info on that can be found here.

If someone does have these in their possession, chances are they are doing it illegally, unless they have an ATF issued explosives license and have a good reason to have it, which I doubt Swerlein had.

So the article by Victoria A.F. Camron in the Daily Times-Call,

Police: Chemicals more than rocket hobby may not be entirely correct when it says

Swerlein told police he purchased the chemicals to experiment in model rocket fuel technology, but Lewis said PETN and nitroglycerin are not used for model rockets.

I suspect there may be a significant difference between "high-performance rocket fuel" such as that used by the Space Shuttle and fuel used in "model rockets" ... so I'm still looking into this angle ... and you can expect more updates soon!

Here's another relevant quote, from an article by Pierette Shields of June 20:

Warren Musselman, a board member of the Northern Colorado Rocketry Club, said on Tuesday that the explosive chemicals police have identified from the home are not components of fuels used in model rocketry.

“Our stuff burns at a predictable rate and creates a lot of gas,” he said. “Explosives don’t burn. They detonate.”

Was Mr. Mussleman speaking of all the explosives found at the Swerlein home, or maybe he meant to phrase it differently? He went on to explain:

Musselman said chemicals like PETN and sodium azide are dangerous and are simply not model rocket fuel ingredients.

“Explosives of any kind don’t have anything to do with the rocketry hobby,” he said.

I was always under the impression that explosives had no value as fuel and that's why they were shunned -- for destroying the rockets they were supposedly about to launch! But I'm learning more and more about it and we'll probably have more updates soon.

Ronald Swerlein's Out On Bail And Going Home But The Neighborhood Is Safe Because The Cops Have All His Explosives, Weapons, Glassware, Magazines ...
Filed under: Ronald Swerlein, terrorism
by Winter Patriot on 1:11:00 PM
Newer Post Older Post Home