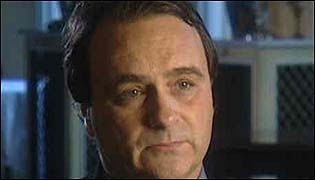 Robert Baer, the "former" CIA agent who writes columns on "intelligence" for TIME Magazine, is often quoted with approval by "dissident" journalists who, in my opinion, ought to know better.

Even giving Baer the benefit of every possible doubt, there's no way I can believe an honest journalist wrote this (mirrored here):

One conclusion to draw from the new Osama bin Laden video tape is that the mastermind of 9/11 apparently is worrying about his relevance these days.

Mastermind? We've been told 9/11 was masterminded by Khalid Shiekh Mohammed. Bin Laden was supposed to be the financier, remember?

Relevance? Bin Laden has no reason to worry about his relevance. But George Bush certainly does!

The new bin Laden video -- eight kinds of bogus, as discussed here (and here) -- brings bin Laden back into the spotlight at the very time Bush needs him most. And Robert Baer is onboard for the parade. How very convenient!

Now, as Bush faces another Democratic challenge to his plans for continuing the Iraq War, bin Laden shows up again, essentially berating the Democrats for not forcing U.S. troop withdrawals.

“The vast majority of you [Americans] want it [the Iraq War] stopped,” bin Laden said. “Thus you elected the Democratic Party for this purpose, but the Democrats haven't made a move worth mentioning.”

That means if the Democrats do renew their efforts toward forcing American troop withdrawals, Bush and his supporters can simply accuse the Democrats of following bin Laden’s orders or playing into bin Laden’s hands.

It certainly does. And they've already started.

And judging by the transcript, he has good reason to worry about it. Among other things, bin Laden maunders about corporations causing global warming and the Democrats failing to get the U.S. out of Iraq. Speculation is already rife that he is wearing a fake beard, since his grey of a few years ago has mysteriously disappeared. It seems he's either lost his mind, or is the victim of a covert action campaign.

Victim? Willing participant? Or dead man impersonated? Who can say?

Still, there is no doubt at all that this video was part of a covert campaign -- to instill fear in the hearts of the terminally stupid, and to discredit the opponents of the so-called president.

... you read this thing, and it's like he's been sitting around reading lefty blogs, and he's one of these childish people posting rants at the bottom the page, you know, Noam Chomsky and all this stuff.

You can't help read it and not laugh at it, occasionally, because it is just absurd. It's flying this way, and that way, weird conspiracy theories, and mortgages, global warming. He throws it all in there.

Despite -- or maybe because of -- his enthusiasm to attack 70% of the country with a guilt-by-association smear, Brooks bolsters the opinions of those who believe bin Laden's scripts have been written in English:

The one thing that leapt out [...] was how Western it is. [...] there's this argument that Western ideas never permeated into the Arab world, but in fact it's all -- I mean, a lot of the worst ideas from the West have permeated in, and he's picked up Noam Chomsky, and he's picked up some of the anti-globalization stuff. And that's what infuses this.

An enemy leader who parrots its domestic critics?! What more could the administration ask for?

Bob Parry explains how this propaganda will come into play:

Fox News commentator Sean Hannity offered a taste of how the new bin Laden tape will be used against both Democrats and the American Left.

“One of the things that also struck me is the language specifically that he [bin Laden] used,” Hannity said. “He seemed to adopt the very same language that is being used by the hard Left in this country, as he describes what’s going on in Iraq as a ‘civil war’; he actually used the word ‘neocons’; he talked about global warming; he denounces capitalism and corporations.”

In other words, any similarity in language between bin Laden and what many Americans say in common conversations will be used to discredit them. They will become bin Laden’s fellow travelers.

He actually used the word "neocons".

If only our "opposition" politicians were brave enough to follow suit!

The new tape aside, it's hard to imagine that bin Laden is happy about what he's wrought in the last six years since 9/11. How can he not see that he is accountable for the death of tens of thousands of Muslims, nearly all of them believers, innocent of any crimes against Islam? Whether he intended it or not, bin Laden is largely responsible for destroying Iraq. And displacing two million Iraqi Muslims.

As a matter of cold, hard, treasonous fact, George Bush is the one most responsible for destroying Iraq. Even the administration's most accomplished liars have admitted that Osama bin Laden had nothing to do with it -- but only when (and for as long as) they were forced to tell the truth.

It's quite something to see a "critic" of the government's hard-line policy taking a harder line than the government itself. It says something about the critic's integrity, in my view; something not entirely flattering...

Baer takes a quick look at what bin Laden has "accomplished".

Bin Laden has lost in the Kingdom. The Saudi royal family is still standing, having rooted out bin Laden's networks. Saudi Arabia is no closer now to the Islamic caliphate bin Laden envisaged than it was before 9/11. And Iraq has shown his vision of a supranational radical Islam to be more of a pipe dream than a reality.

The same is true for the rest of the Middle East. Without exception, regimes across the Middle East, from Pakistan to Morocco, are more repressive than they were before 9/11. It's arguable they are more stable and better prepared to crush bin Laden's extremist interpretation of Islam.

More stable? Tell that to Pakistan!

September 11 has not forced the United States to lessen its support to Israel. In fact, it has been increased — and with fewer questions. Likewise the United States is less inclined to protest human rights violations in the Middle East.

This proves nothing, of course. But it does point out that bin Laden's denial of responsibility for 9/11 makes more sense than the accusations that have been leveled against him. Those of more conspiratorial bent would say that all these changes -- especially an increase America's support for Israel -- were among the goals of the real perpetrators.

As for human rights violations in the Middle East, America no longer has a leg to stand on. It was Americans, after all, who set up secret torture centers. And it was Americans who decided the Geneva Conventions were "quaint".

Who were the real perpetrators? Let's put it this way: The FBI doesn't have any evidence connecting bin Laden to 9/11, let alone the destruction of Iraq and the outbreak of human rights violations all over the world. But that didn't stop the perps from telling the world that 9/11 was bin Laden's responsibility -- even while it was still happening!

I have no doubt that bin Laden can and will mount a terrorist operation, anything from bombing the London tube to an attack on New York's subway. Thanks to the Internet, a suicide bomber under bin Laden's sway can buy all the chemicals he needs from his local pharmacy to fabricate a bomb. He also can find the religious guidance, as specious as it might be, to justify the act.

Be afraid! Be very afraid! Don't stop and think about this at all!

Can a suicide bomber really buy all the chemicals he needs from his local pharmacy? And if so, does this situation exist thanks to the Internet?

Bin Laden should know by now that if he does manage a terrorist attack, the only thing he should count on is a hardening of America and its allies' positions. Especially in Europe. An attack there, such as the foiled plot in Germany, would sweep away European unhappiness about secret prisons and Guantanamo, once again lining Europe behind the U.S. in its war against Al-Qaeda.

All this is true and bin Laden knows it. But it doesn't matter, because if there is another terrorist attack on America or Europe, it won't come from bin Laden. Still, Baer manages to write:

Islamic history will remember Osama bin Laden as a bad Muslim. Islamic canon is formal: a Muslim leader must do everything he can within his power to prevent fitna — civil war between Muslims. And that is exactly what Bin Laden has done in Iraq, drawing us into a war and creating the circumstances for Shia and Sunni to kill each other. Whether or not al-Qaeda is responsible for every market truck bomb in Iraq or not, it will be laid at bin Laden's feet.

This is nonsense, of course -- despicable, murderous nonsense. We are at war with Iraq because it's part of the plan -- a plan hatched long before 9/11. The Shia and Sunni were not killing each other until Americans set up "sectarian" death squads there, spurred on by Dick Cheney's unquenchable thirst to "run with the bad boys".

At the time of the invasion, as we recall, Robert Baer posed an an opponent of the president's plan. Now, four and a half years and perhaps a million deaths later, is it really all bin Laden's fault? Apparently that's how it looks to this faux-dissident, "former" CIA man.

With this kind of carnage tied to his name, bin Laden would be better off staying put in his cave and keeping his mouth shut.

Au contraire, mon ami: it's Robert Baer who would be better off keeping his mouth shut, at least until he can come up with some more convincing lies.

Is the administration in so much trouble that it seems necessary to blow the cover of a disinformation source who is trusted by the enemy?

And can we all stop quoting this guy now?
Filed under: Germany, intelligence, manure, Osama bin Laden, Robert Baer
by Winter Patriot on 1:12:00 AM
Newer Post Older Post Home