Pakistan: Was A Deadly Missile Launched From A CIA Drone? 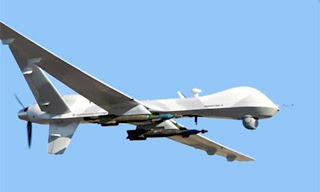 Fighting in the mountainous northwest of Pakistan continues to escalate; witnesses say at least ten people were killed on Friday when three houses were destroyed by two missiles launched from a drone -- a pilotless, remote-controlled aircraft.

a compound [...] on the outskirts of Miran Shah, the main town in the North Waziristan tribal region,

according to a report from the AP (via the IHT), quoting

an army official and two local security officials said on condition of anonymity because they were not authorized to speak to the media.

As Reuters reported, the attack occurred near a madrasa "in a village near the town of Miramshah".

The sprawling religious school or madrasa near Miranshah, the main town in the Waziristan tribal region, was founded by veteran mujahideen commander Jalaluddin Haqqani, whose ties to bin Laden go back to the 1980s jihad against the Soviet occupation of Afghanistan.

Local sources [...] said the house [hit by the missile] was used as a training camp by insurgents loyal to Baitullah Mehsud, the leader of Pakistan-based Taliban militants who have been blamed for a string of suicide attacks that have killed 400 people since July.

No one has claimed responsibility for this attack, which occurred in the North Waziristan village of Danday Darpakhel.

The Pentagon has denied any involvement. Pakistan says they didn't do anything, and their Air Force doesn't even have any drones. The CIA, which reportedly does have drones, declined to comment, as usual.

The attack complicates Pakistan's political situation, which is already teetering on the edge of instability, and the embattled President, General Pervez Musharraf, has reportedly been advised repeatedly by his American "friends" not to declare martial law.

According to the BBC:

"A drone was flying very low and fired the missile. It destroyed three houses," a villager told the Reuters news agency.

"I have seen human flesh scattered all over the area near the houses."

North and South Waziristan have been at the centre of fighting between the army and Taleban and al-Qaeda militants.

The Pakistan military has frequently denied giving permission for US forces to carry out strikes on its soil.

The Pentagon told everybody the same thing. Here's their statement from Reuters via the Washington Post:

The Pentagon said the U.S. military did not carry out a missile strike on Friday that witnesses said killed at least five people near a religious school run by pro-al Qaeda mujahideen in Pakistan's Waziristan region.

"There was no indication that that was any U.S. military asset," said Pentagon spokesman Bryan Whitman after speaking with U.S. military officials in Afghanistan.

"Every indication was that there was no U.S. military involvement in this activity that you've seen," he said.

Asked if the strike could have been launched by aircraft owned by another U.S. agency, such as an intelligence agency, Whitman said he did not speak for other agencies.

"I only talk for the United States military," he said.

Witnesses said a U.S. drone aircraft launched a missile on the religious school founded by an old friend of Osama bin Laden. The Pakistan military does not possess drones.

The AP report in the IHT appears to describe a drone reconnaissance mission earlier in the day.

Residents in Miran Shah, about 20 kilometers (12 miles) from the Afghan border, said they saw a low-flying drone an hour before hearing a loud explosion.
...

"I saw a spy plane about one hour before the explosion," said local shop owner Arman Khan, adding that it came from the direction of the Afghan border. Two other residents had similar reports.

"There was a roar in the sky, we feared it was an air raid but we saw no jets. Then there was a huge blast," Noor Mohammad, a student at a religious school in the region's nearby main town of Miranshah, told AFP.

According to Simon Cameron-Moore of Reuters:

Nuclear-armed Pakistan's internal security has deteriorated sharply in the past few months and the country is trembling from a wave of suicide attacks by al Qaeda-inspired militants.

Political uncertainties abound, with President Pervez Musharraf uncertain whether the Supreme Court will let him keep his re-election victory in parliament last month, because he ran while still army chief.

Pakistan was awash with rumors this week that General Musharraf, who came to power in a 1999 coup, might invoke emergency powers, declare martial law or put off a national election due in January that is supposed to transform the country into a civilian-led democracy.

And here's more background from AFP:

Pakistan moved 2,500 troops into Swat last week to counter cleric Maulana Fazlullah, also known as "Mullah Radio" for his speeches on his private radio station, in which he calls for a holy war on the authorities.

Fazlullah, who runs a banned group that sent thousands of fighters into Afghanistan after the US-led invasion to topple the Taliban in late 2001, is demanding the imposition of strict Islamic Sharia law in Swat.

The militants have taken control of several villages in the scenic Swat Valley, which was once best known for its ancient Buddhist heritage and relics, and set up checkpoints.

The violence has fuelled fears that military ruler Musharraf, who seized power in a coup in 1999, may impose an emergency or even martial law in the face of mounting political opposition and a hostile Supreme Court.

The court is a danger to the President General because his "election" has not yet been ratified, and by the letter of the law it appears to be illegal on two counts, if not three.

The Supreme Court may rule according to "the law of necessity", a doctrine which excuses any and all abuses. But then again it may uphold the law. Nobody knows. And that's why Musharraf has been floating a trial balloon called "Martial Law"

But the President General's American friends are against the idea -- so much so, that Secretary of State Condoleeza Rice herself said "free and fair elections" -- as in:

"Pakistan needs to prepare for and hold free and fair elections"

which is the first time anyone from the State Department has mentioned "free and fair elections" and "Pakistan" in the same breath in a very long time.

Is Condoleeza Rice hyperventilating even more than usual, or is the State Department sending a message to the President General: "Watch your step, buddy-boy, you can't survive free and fair elections and you know it!"

Musharraf has his own response ready for the State Department, of course: "I'm fighting the front line battle in the War on Terror. And it doesn't help me when you tell me what to do."

But in the meantime, Musharraf's troops are still pressing the fight in the mountains, a fight which has spread into the Swat Valley, as the attack in Karachi which killed 140 people two weeks ago continues to reverberate, and the GWOT continues to engulf Pakistan.
File under: Ayman al-Zawarhi, Baitullah Mehsud, BBC, GWOT, Pakistan, USSR
Email ThisBlogThis!Share to TwitterShare to FacebookShare to Pinterest
Posted by Winter Patriot