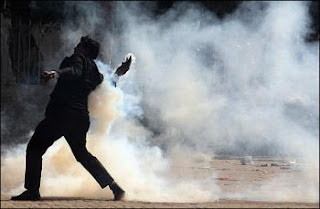 Above all else, the War on Terror is an assault on the Rule of Law. We can see this clearly in the news from Pakistan.

Late Saturday night, in a televised address, Pakistan's President and Army Chief of Staff, General Pervez Musharraf, said extremists posed a grave threat to democracy in Pakistan and that inaction in the face of this threat would be tantamount to national suicide.

What he meant was that the Supreme Court was about to rule his rigged "election" of October 6th illegal, and that inaction in the face of this threat would have cost him his job.

It is true that the Taliban and al Qaeda pose a threat in Pakistan. But clearly they do not threaten democracy! 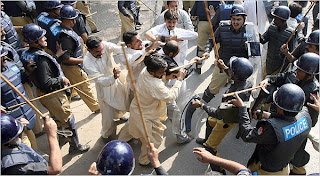 There is no democracy in Pakistan. The country is ruled by a military dictator. He took office in a bloodless coup in 1999 and since then he has been both President and General in open defiance of a restriction against government officials holding two offices.

Pakistan, like the USA, has a system which theoretically provides indirect democracy. In Pakistan, rather than a state-wise electoral college, the president is elected by members of the national parliament and the provincial assemblies.

In the previous elections, 2002, Musharraf managed to remain in power despite popular opposition in an election that appeared to be rigged. The winners then voted for him to remain as President. Since then, the president and the parliament have worked together with the Americans in the War on Terror. 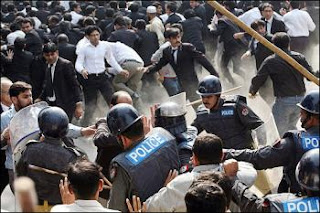 Under Pakistani law, each assembly is supposed to elect one president, and there should have been another general election before the next presidential election. But during the past few months, Musharraf has arranged to be "re-elected" by the same assemblies which elected him in 2002. This was clearly illegal and it appears the Supreme Court was about to say so.

In his declaration of national emergency -- martial law by another name -- Musharraf accused the Supreme Court of working at cross-purposes to the other branches of the government. By this he meant that the Supreme Court was about to uphold the rule of law.

It had done this several times in the past, much to Musharraf's inconvenience.

For instance, the court recently ordered the release of 60 "militants" who were being held as "Taliban sympathizers". The problem, according to Chief Justice Iftikhar Mohammed Chaudhry, was that they had been held without charge. That was illegal in Pakistan -- until Saturday night. 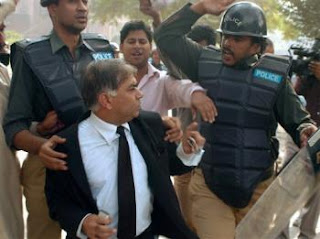 In another case, the Chief Justice ordered the release of political activists who had been illegally imprisoned.

Chief Justice Chaudhry, by standing up for the rights of people who had been illegally detained -- and against the President General -- had shown himself to be an enemy of the War on Terror.

Musharraf had already tried to get rid of the Chief Justice. The groundswell of support for the embattled Chief Justice -- led by the country's lawyers and visible in huge rallies in one city after another -- eventually forced the President General to reinstate the Chief Justice.

Even more recently the court disciplined two high-ranking police officers after their force had made an unprovoked and bloody assault on lawyers who were demonstating peacefully against Musharraf's "re-election". 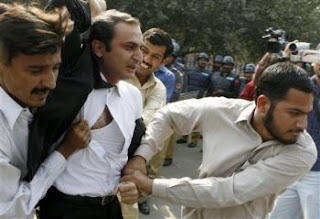 Musharraf on Saturday night accused the court of interfering with the police, and demoralizing them, thus weakening their resolve for the War on Terror.

The problem -- of course -- is that the War on Terror is a fraud.

The attack on Benazir Bhutto's self-staged welcome-home parade was billed as an attack on democracy. Unfortunately for those who appeared to believe that, there was no truth in the story.

Bhutto's return itself was an attack on democracy -- on a democracy that didn't even exist. It was a pretense of democracy, an insult to those who expected Musharraf to deliver on his promise of a transition to democracy. 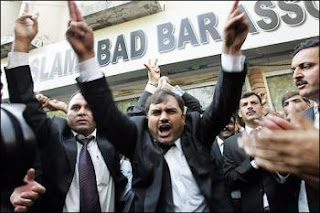 The CIA started funding and arming and training Muslim radicals in the late 1970s. They couldn't do this directly, so they used the notorious Pakistani intelligence service, the ISI, and did it by proxy. The force they raised wasn't called a terrorist network at the time. They were called freedom-fighters, and they ruined the Soviets in Afghanistan.

Now, after being implicated in the blackest op of all, this band of radicals have been the target of the War of the 21st Century. Mostly this war is fought by proxy in Pakistan, where Pakistani troops funded by American dollars have been fighting -- somewhat sporadically -- against the militants in the mountainous northwest, the wild border area between Pakistan and Afghanistan. 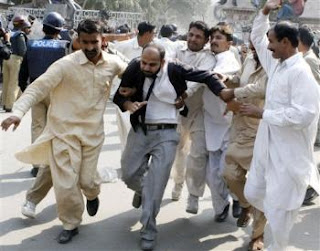 Pakistan has supposedly been America's number one ally in the War on Terror ever since 9/11. But there's a problem, because Pakistan is deeply implicated in 9/11 itself. We aren't supposed to know about that.

Until quite recently, militant Islamic fundamentalism had a home in the heart of Islamabad. Musharraf's decision to besiege and then attack Lal Masjid (the Red Mosque) triggered an increase in the frequency of attacks against his security forces. Who would have guessed?

The militants do conduct horrifying attacks, sometimes suicide attacks, in which innocent people are killed and injured. Most often the targets of the attacks are military or police forces engaged in offensive operations in the mountains. We are almost never told this; instead we are told they are attacks against democracy.

In fact democracy has nothing to do with it. The militants are not in favor of democracy. But neither is Musharraf.

Musharraf pretends to be concerned about the militants in the mountains, but his emergency powers have all been used against domestic political opposition. The makeup of the opposition is unlike any opposition ever seen in the USA. It is led by the lawyers, who go to the streets in black suits in defense of the rule of law.

This makes them opponents of the War on Terror, and they are beaten bloody for their efforts. 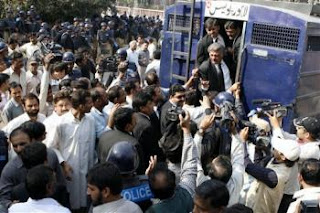 The public is being told that the Americans oppose this emergency crackdown. In fact it would never happen without their consent. For many months they have made it clear that they want Musharraf in power no matter what. If this is what it takes, so be it.

Of course they never admit this.

The Americans want Musharraf to hold elections on schedule, but this is about the only thing they seem to care about. If the elections proceed as planned but all the opposition leaders are in prison, does that qualify as democracy? It will if Bush has anything to say about it. 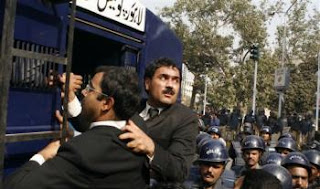 It's good for the militants, because it attracts people to their cause.

It's good for the militarists in the government, because they thrive on power.

It's good for big business too -- the market says so.

Is it a dry run for Bush? Not exactly.

Bush is dealing with much different dynamics than Musharraf. For example: Where are our lawyers?
File under: Benazir Bhutto, GWOT, Iftikhar Muhammad Chaudhry, Pakistan, Pervez Musharraf, USSR
Email ThisBlogThis!Share to TwitterShare to FacebookShare to Pinterest
Posted by Winter Patriot