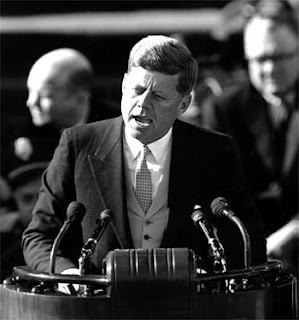 We're rapidly approaching the 44th anniversary of the JFK assassination.

Some people still think about that, and I'm one of them.

JFK's death changed my life forever, in many ways -- "some forever, not for better" as the Beatles sang.

And it chills me to see the anniversary fall on Thanksgiving, but here it comes.

Perhaps we can talk more about the assassination itself in another post; for now I have a few simple points to make.

That the assassination was the result of a conspiracy is beyond doubt. Some people suspected as much in the immediate wake of the crime, and many more joined them in the ensuing years. These people have been consistently derided in the mainstream media -- but they have been right all along.

To understand the scope and depth of the plan to kill the President, it's best to think of the murder and the ensuing coverup not as a single conspiracy, but as two separate conspiracies.

These two conspiracies certainly overlapped, but they were very different in many ways, including size and duration. 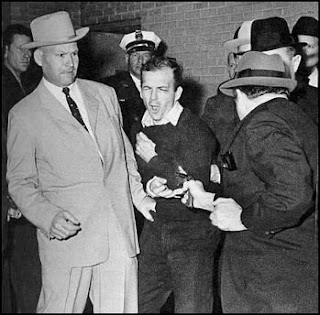 But the conspiracy to hide the crime has involved many more people and continues to this day.

It is not correct to say (as some do) that the conspiracy to hide the crime began on the day of the assassination, or even (as some believe) two days later, when Jack Ruby killed the suspected assassin, Lee Harvey Oswald.

On the contrary, the seeds of the coverup were carefully prepared along with the murder itself, and they came to life when the President died.

The shooters, the men who actually killed Kennedy, had little or nothing to do with the coverup.

Some people think of "coverup" and "conspiracy" interchangeably, but there's an important difference: Many of the people who were involved in the coverup were not part of the conspiracy.

And some of them played their parts without knowing there was anything wrong with what they were doing.

For instance, Walter Cronkite, America's most trusted newsman, told the country the official story of the JFK assassination from his anchor desk at CBS News.

"Lee Harvey Oswald killed President Kennedy," he told us. "The killer was a communist."

"Jack Ruby killed Oswald for the good of the country."

"He wanted to spare the President's widow the trouble of testifying against the shooter."

Walter Cronkite was part of the coverup. And we believed his every word.

Was Cronkite part of the conspiracy? I don't think so. He was just reading the news. But he was getting bad information.

A lot of people were getting bad information.

It's not necessary to bring people into "the conspiracy" if you can fool them, or if you can give them orders.

In fact, if you can give them orders, it's not necessary to give them any information at all.

Many of the people who participated in the JFK coverup did so willingly but unwittingly.

They happily did what they were told, and they never suspected that anything was amiss.

Others sensed that they were involved in covering up something, but they didn't know what it was.

They were following orders, and sworn to secrecy -- even though they didn't know what was going on.

Some "debunkers" have suggested that a huge and elaborate conspiracy would have been needed "to kill the President and get away with it".

To "prove" their point, they hypothesize huge interconnected conspiracies, where everybody knows everything everybody else knows.

And they say "If there's this great conspiracy, why hasn't anybody talked?" But the answers are obvious.