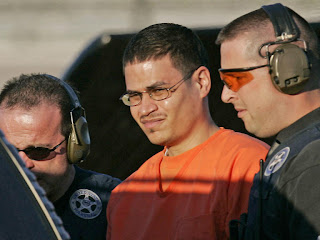 Jose Padilla, who was convicted last August of conspiracy to murder, kidnap and maim people in a foreign country, and of two lesser counts of material support for terrorists, has been sentenced to 17 years and four months in prison.

The sentence is seen as a "victory" for the defense, since Padilla and both his co-defendants were eligible for life sentences.

But the judge, Marcia G. Cooke, of the Federal District Court in Miami, said

so she gave them all relatively "light" sentences. Or so the media spin goes.

The feds arrested Padilla in 2002 and charged him with plotting to detonate a "dirty bomb". They held him in utterly inhumane conditions for three and a half years, doing permanent mental damage to him, and then they decided he wasn't a "dirty bomber" after all. But they still needed to keep him in prison, for political reasons and not because he posed any danger to anyone, so they connected his case to that of a couple of others who had been under surveillance for years.

In the trial it came out that the FBI had collected 300,000 intercepts during their investigation, of which exactly 7 included Padilla's voice, and that in those conversations he had never advocated violence, not even using the code-words employed by the others.

The feds also had a piece of paper which was allegedly an application to join al Qaeda and allegedly had Padilla's fingerprints on it. It was their only semi-solid evidence against him but it was good enough for a conviction. There's tremendous irony here, of course, because the CIA has been recruiting terrorists and training them to go to foreign countries to kill people for decades.

For more details, please see my post from July of 2007, "Jose Padilla Trial: Prosecution's Case Is Thin; Defense Could Blow The GWOT Out Of The Water ... But Don't Count On It".
Filed under: GWOT, Jose Padilla
by Winter Patriot on 10:52:00 PM
Newer Post Older Post Home