Phantoms Of The Terror War: Daan de Wit on the Liquid Bombers 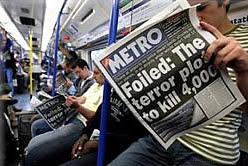 The stories we know about the most famous terrorists and the best known terrorist plots do not match up with the facts.

Thus begins an excellent article called "The phantom terrorists of the War on Terror: Part 1 - The Liquid Bombers", written in Dutch by Daan de Wit, translated into English by Ben Kearney, and published at Atlantic Free Press.

August of 2006. A group of about 25 terrorists, later to become known as the Liquid Bombers, takes the West by the throat with their plan to crash approximately ten airplanes simultaneously. President Bush addresses the nation: 'If these terrorists had succeeded, they could have caused death on a massive scale. The plot appears to have been carefully planned and well-advanced. They planned to bring the components of their explosives on board in their carry-on luggage, disguised as bottled drinks and electronic devices'. According to Michael Chertoff, head of America's Homeland Security Department, the attack could potentially have resulted in hundreds of thousands of casualties. The near-attack by the alleged terrorists gets a lot of publicity because of a huge operation by the police in which a number of airplanes are grounded. This is noteworthy because the suspects had already been under the radar for about one year and hadn't made any reservations, much less purchased tickets.
...

The Liquid Bombers wanted to make the explosive TATP (triacetone triperoxide) on board the aircraft. Gerry Murray of the Forensic Science Agency in Northern Ireland and Peter Fielden of the Defence Science and Technology Laboratory at the University of Manchester say that it would be extremely difficult to produce TATP by combining liquids in the restrooms of airplanes. A journalist from The Register consulted experts and describes the problems with the terrorist plan. [..] In order to arrive at TATP, sulphuric acid has to be added to acetone and peroxide drop by drop for several hours at just the right cold temperature while stirring continuously. When the axphyxiating fumes are released, they form white crystals at a temperature of below 10 degrees C (50 degrees F) after a minimum of six hours - though probably much longer - which then have to be harvested by way of filtration and dried for several hours. The thermometer has to be closely monitored as well, as TATP is very unstable, as witnessed by its nickname, 'Mother of Satan'. 250 grams of the white crystalline powder resembling sugar is needed for a substantial explosion, which means that per airplane you need sixteen times the content of an airplanes bathroom sink in order for the plan to succeed.
...

One year later [...] it became clear that a number of the Liquid Bombers had been trained by Jundullah (Army of Allah), a terrorist organization which, as ABCNews suggests, is being sponsored by the U.S. in their clandestine battle against Iran. The London Telegraph is even more specific and writes: '[...] the CIA is giving arms-length support, supplying money and weapons, to an Iranian militant group, Jundullah, which has conducted raids into Iran from bases in Pakistan'. Prior to the training by Jundullah, the alleged terrorists - in connection with an earthquake relief operation - were present in camps run by the Jamaat-ud-Dawa (JUD), the parent organization of the Lashkar-e-Toiba (LET). LET gets (financial) support form the Pakistani intelligence agency ISI, which again is directly connected to the American intelligence agency - the CIA.
...

Even though it is for modern man easier to fall victim to a peanut or to lightning than to a terrorist, the notion of terror is still a reality of daily life. Terrorism is at the top of the agenda. The interests are huge. Large sums of money have been invested, whole careers are at stake and ad agencies - the same people who market everyday products such as deserts and insurance - make a lot of money off of expensive anti-terrorism campaigns...

All of which lends extra emphasis to the following very pertinent question:

What if it had been proven in court that the plan to explode ten or more airplanes with bombs manufactured on the spot was impossible, and all of the anxiety and security measures that followed were actually unnecessary?

The article is the first of a seven-part series that promises much.

I'd read the whole thing if I were you.
Filed under: bogus terror, Homeland Security, liquid bombers, TATP
by Winter Patriot on 11:01:00 PM
Newer Post Older Post Home