Wanna Get This Picture On The Cover! The Photo Rolling Stone Should Have Published With "The Fear Factory" 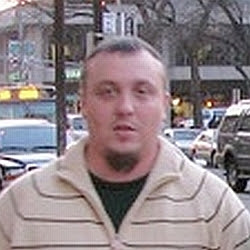 (UPDATED twice, below and belower)

Rolling Stone has just published a long and fairly good article called "The Fear Factory", which focuses on the FBI's so-called Joint Terrorism Task Forces and their apparent history of fomenting bogus terror -- creating false "terror cells" which they can then bust.

The author, Guy Lawson, shines a spotlight on the shady dealings of FBI entrapment specialist William "Jameel" Chrisman, whose story graced these pages some time ago.

Unfortunately, Rolling Stone didn't publish Chrisman's photo, even though it is readily available. Nor did Lawson link to any corroborating evidence, even though plenty of that is available, too.

I have been working on a review of Lawson's piece and I hope to have it ready shortly. But in the meantime, since Lawson has sparked some interest in the case, it makes sense to post a photo of the rat and links to more information.

For a closer (and annotated) look at William "Jameel" Chrisman, how he entrapped Derrick Shareef, and how he tried to entrap Hassan Abujihaad:

And for another glimpse behind the scenes of bogus terror:

Inadequate Deception: The Impossible Plots Of The Terror War

I'll be back with more on Lawson's piece and some related matters as soon as possible. In the meantime, and especially if you're new to all this, please click some links and learn about the terrorist threat we face, where it comes from, and how serious it really is!

The Register-Star, hometown paper of Rockford, Illinois, was none too thrilled with the coverage Rolling Stone provided their fair city, and had this to say about it:

In the process, he takes a few swipes at Rockford, "a Midwestern city of 150,000, with a minuscule Muslim population and the lone claim to fame of being the hometown of Cheap Trick."

Later, Lawson opines, "Finding a meaningful target to blow up in Rockford isn't easy. A hardscrabble town in the middle of America, the place is not much more than an intersection of interstates and railway lines, with little of note that might attract the attention of terrorists."

What are your thoughts on this? Send us an e-mail at local@rrstar.com.

So I sent them my thoughts:

In "Rolling Stone takes aim at Rockford", I see the following:

I hate to break it to you, but you can go without the quotes.

The article describes some of the bogus terror threats that the federal government has been manufacturing! Period.

It is very clear and all the author's assertions are very well-documented elsewhere. But you won't report on that, will you?

Why not? Doesn't the truth matter to the newspapers anymore?

I think you're not only upset that Rolling Stone took a swipe at your thriving metropolis.

I think you're also ticked because they showed up your shitty little paper.

You should have been reporting on this more than a year ago.

I wrote to Mike Wiser -- the "Star" reporter who covered this story extensively at the time -- and pointed out that the evidence of entrapment was enormous.

Indeed, the scent of entrapment was all over this case from the beginning.

But apparently he wasn't interested. And apparently you still aren't.

Are your revenues declining, just like all the other shitty newspapers in this country?

Maybe you should start printing the truth for a change and see whether that makes a difference in your sales.

Because right now the bloggers have your ass beat from here to hell and back, chump.

I've been looking and looking for a good piece on this story and I've finally found one.

Draped across the throat of our nation like a lank noose about to be pulled taut is a system of 102 Joint Terrorism Task Forces (JTTFs). These entities, which could properly be called homeland security soviets, combine state and local police with FBI Special Agents, covert operatives from the CIA, personnel from various directorates of the Department of Homeland Security, and investigators from the IRS.
...

FBI Special Agent Lundgren told Rolling Stone that the JTTFs are governed by “the Dick Cheney one percent solution”: If there is just a one percent chance that a terrorist incident can occur, “then we have to treat our response as if there were a 100 percent chance.”


Of course, where no evidence of a plot exists, the Feds stack the odds by employing provocateurs who supply the missing “one percent chance.”