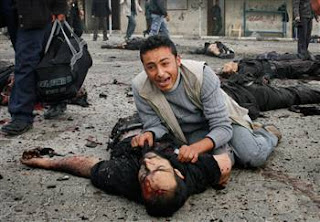 After months of a sickeningly brutal blockade, in which more than a million people have been deprived of life's essentials, the blockaders have escalated the "conflict".

The first wave of "retaliation" was a series of airstrikes in which -- according to reports -- 60 warplanes attacked 50 targets, killing more than 200 people and injuring at least 400 others.

The assault continues even now, with threats of more air attacks and a world-wide propaganda campaign against the victims.

The "elected" "leaders" of many western nations are disgorging the propaganda, and major "news" services are catapulting it, with the usual assistance from the blogosphere, including some allegedly dissident elements [to which I would be ashamed to link].

We can expect every Israeli action to be explained as a "reaction" to an endless series of provocations, for which the Telegraph gives some context:

Nine Israeli civilians have been killed by rockets fired from Gaza since [...] September 2005.

Over the same period, at least 1,400 Palestinians have been killed by Israeli security forces in Gaza, according to figures compiled by B'Tselem, an Israeli human rights group.

According to the Guardian,

The raids [...] took place mid-morning rather than at night [...] Some of the missiles struck densely populated areas as children were leaving school. Parents rushed into the streets to search for them.

Civilians rushed wounded people in cars and vans to hospitals because there weren't enough ambulances to transport all the dead and wounded.

With an Israeli election just six weeks away, it will almost certainly be "necessary".

It will be done "properly", too, as Ha'aretz notes [via the Angry Arab]:

UPDATE: The horror and the propaganda continue, as Israel pounds Gaza for a second day.

File under: Gaza, Israel
Email ThisBlogThis!Share to TwitterShare to FacebookShare to Pinterest
Posted by Winter Patriot