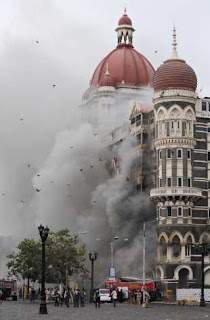 Despite the apparent confusion and the obvious media spin, the picture that emerged from the early reporting of the Mumbai attacks was a fairly comprehensible one: a picture of a false flag commando raid.

It was a commando raid, as opposed to a suicide bombing or other forms of terrorist attack; surely that much was clear to everybody. There were multiple commandos and multiple targets, and it was obvious that a great deal of knowledge and skill must have gone into the planning.

But it was also clearly a false flag attack, as the multiple simultaneous attempts to pin the blame (or take the responsibility) made no sense, singly or in combination. Even as the shooting was going on, the Indian government was saying the attackers (whoever they were) had come from outside the country. A "terrorist group" calling itself the "Deccan Mujahideen" had claimed responsibility, but no terror expert had ever heard of such a group.

In reality-based situations (of which this is not one!), the analysis of such a horrible crime would begin with the known facts, and it would proceed in a systematic fashion, from the knowns to the unknowns.

For instance, one might start with the observation that the Mumbai assault was a highly-coordinated commando raid, and then raise the questions: "Who does this sort of thing?" and "Among those who do this sort of thing, who had something to gain by doing this?"

These are questions we never saw asked, let alone answered, in the mainstream media. It seems quite clear to me, and one of the reasons for the title of this series, that they don't ask these questions because they're afraid of the answers. So instead of intelligent, penetrating, appropriate analysis, we got nonsense.

To begin with the official account, let's just say the official account of the attacks makes very little sense. Supposedly there were only ten attackers, and supposedly they attacked in 13 locations more or less simultaneously. Nobody in the mainstream seems prepared to ask how something like this could have happened without inside help. Some analysts pointed out that a high degree of local knowledge must have been required for such an attack, but they went on to conclude that therefore the attackers must have been foreigners. It was difficult to imagine a more counter-intuitive conclusion; but not for long.

Nobody asked: "Who could do this?" or "Who would do this?" Instead they asked: "How did al Qaeda do this?" and "Why did al Qaeda do this?" After a while it became more or less obvious that the Mumbai attacks didn't involve hijacked airplanes crashing into buildings (like al Qaeda in North America) or suicide bombers and car bombs (like al Qaeda in the Middle East). And connecting al Qaeda to these attacks directly became a bit of a problem. So then instead of asking "Who else could have done this?", they began to ask: "How are the perpetrators of this attack connected to al Qaeda?"

Still jubilant over the alleged death of Rashid Rauf, the alleged leader of the so-called Liquid Bombers, who was (or wasn't) killed in Pakistan just four days before the Mumbai attacks began, some terror warriors sought to connect the attacks to the death of the alleged terrorist mastermind and provide a motive at the same time. Thus we were privileged to read that the attacks may have been carried out in revenge for the killing of Rashid Rauf.

Perhaps we could forget -- if only for a moment -- that more than 400 people were killed or wounded in Mumbai, and not one of them had ever harmed Rashid Rauf. Perhaps we could imagine a bizarre terrorist mind in which somehow ordinary Indian citizens were held responsible for American drones dropping Hellfire missiles on alleged terrorists in Pakistan.

But we couldn't bring ourselves to believe that these brazen, coordinated attacks were carried out in revenge for something that had happened only four days earlier. So the terror warriors needed another, slightly plausible, al Qaeda connection. 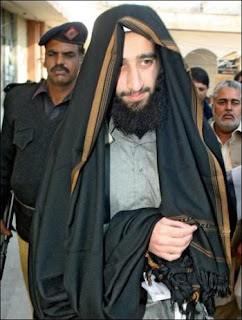 It didn't take them long to find one. And now British terror warriors are going to India to investigate the possibility that Rashid Rauf may have planned the Mumbai attacks.

As Ben Goldby reported for the Birmingham Mercury News:

Sources have now revealed that [Rashid Rauf] was planning a major attack at the time of his death, and that the Mumbai murders show all the hallmarks of one of Rauf’s “terror spectacular” plots.

Except, of course, for Rashid Rauf's trademark hallmark -- the mission has to be impossible!

The Indian Mujahidin, which carried out a blast in Delhi in September and warned that they would strike next in Mumbai, is understood to have been behind this week’s terror outrage.

Not exactly. But the media are on that theme, and it works well for them, as we will see.

The group is made up of several different militant organisations, the most dangerous of which are the Pakistani-based Kashmiri “freedom” movements Lashkar-e-Toiba (LET) and Jaish-e-Mohammed (JEM).

Rauf was known to have strong links to both organisations.

He married a relative of JEM’s founder and worked with LET to train British jihadis who travelled to Pakistan. London 7/7 bombers Shehzad Tanweer and Mohammed Siddique Khan both studied at an LET madrassa near Lahore in 2004.

Last night, a terror expert told the Sunday Mercury: “It is understood that this attack in Mumbai is the work of the Indian Mujahidin, based on plans and support from Kashmiri groups based in Pakistan.

“The planning seems to have been done by an Islamist militant group called Lashkar-e-Toiba and they have close links to other Kashmiri fighters including Jaish-e-Mohammed.

“In Rashid Rauf we have a man who dreamed up an alleged plot to blow up 10 transatlantic planes. We know he plotted spectacular attacks and we know that we was planning a terror operation when he was killed.

“This attack in Mumbai, with the synchronised terror strikes in multiple locations, is certainly consistent with his approach to militant tactics.”

It's not consistent with anything we know about the so-called Liquid Bomb plot, but our anonymous sources aren't letting facts get in the way of a good story -- except in one important respect.

The source says Rashid Rauf dreamed up "an alleged plot", and the reason for this particular qualifier is clear -- because the alleged plotters have already been tried and the jury refused to convict them. The jury didn't believe that the alleged plotters were plotting to blow up 10 transatlantic planes. The jury didn't believe they were plotting to blow up even one transatlantic plane. In other words, the jury believed the allegations were false. But those allegations are still treated as if they were untested. How utterly unremarkable!

But it would be remarkable if Rashid Rauf had planned the assault on Mumbai. For the terror warriors, it would be remarkably fortunate, because then they could claim to have scored a major victory in the war on terror, and they could more confidently ignore their critics, who say that dropping Hellfire on anybody -- especially somebody who has never been convicted of a crime -- is more like terrorism than justice.

But it would be even more remarkable in another sense. Last week at this time we were reading about how Rashid Rauf was killed along with a couple of the other top-level al Qaeda masterminds, who drew attention to the mud bungalow in which they were meeting, by using a mobile phone.

So now we're supposed to forget that, too, and we're supposed to believe that a tightly coordinated commando raid, an assault on 13 targets in a foreign country, was planned by a mastermind who couldn't even use a cell phone without being monitored -- and murdered.