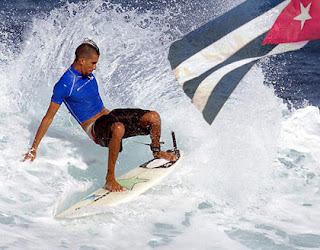 Fortunately, Cuba doesn't already have enough problems. Fortunately as well, neither does the United States. So president Bush on Wednesday started talking about regime change in Cuba, uttering new threats, inciting new fears, and increasing the old and pointless tension between the two countries.

"For Cuba's ruling class, its grip on power is more important than the welfare of its people."

Fortunately, we don't have the same problem in the USA.

"Will you defend a disgraced and dying order by using force against your own people? Or will you embrace your people's desire for change?"

Fortunately as well, there is no need for the same sort of question in the US. Because our government only does what's best for our people, and there is no desire for change at all.

How fortunate can one nation get?

As Ben Feller of the AP notes:

The U.S. cut off diplomatic ties with Cuba in 1961, two years after Castro led an armed revolution that drove out U.S.-backed dictator Fulgencio Batista. The U.S. deems Cuba to be a state sponsor of terrorism and has long sought to isolate it through trade and travel restrictions that Bush has intensified.

Does the president really want us thinking about state-sponsored terrorism?

When the killers of civilians are on Bush’s side, they get the full panoply of legal protections – and every benefit of the doubt. Under this Bush double standard, therefore, right-wing Cuban terrorists Luis Posada Carriles and Orlando Bosch, though implicated in a string of murderous attacks on civilians, get the see-no-evil treatment.

On April 19, the 79-year-old Posada was released on bail from federal custody for an immigration violation and allowed to fly to Miami where he will live at home while his case winds its way through the U.S. courts. Bosch, too, has been allowed to live out his golden years in south Florida with the help and protection of the Bush family.

But the evidence in U.S. government files is overwhelming that Posada and Bosch were the architects of the 1976 mid-air bombing of a civilian Cubana airliner, killing 73 people, including young members of the Cuban national fencing team.

Since the conspiracy was hatched in Caracas, Venezuela, where Posada worked as a Venezuelan intelligence officer, the Venezuelan government has sought Posada’s extradition. However, when a Posada friend testified at Posada’s immigration hearing that Venezuela practices torture, Bush administration lawyers let the unverified claim go unchallenged, leading the judge to forbid Posada’s deportation there.
...

The Bush administration also took no note a year ago when Bosch publicly justified the 1976 mid-air bombing. The stunning TV interview of Bosch by reporter Juan Manuel Cao on Miami’s Channel 41 was cited in articles on the Internet by José Pertierra, a lawyer for the Venezuelan government. But Bosch’s comments caused him no further difficulty.

We can see, quite easily, that this is not really about terrorism, or anything else that the Cuban state sponsors -- except the health and welfare of its citizens. Here's Ben Feller of the AP again:

Lawmakers of both parties have proposed easing the trade and travel restrictions, which they claim have done little good; Bush says doing so would only strengthen a dictatorship.

Over the years, the U.S. government has spent many millions of dollars to support Cuba's opposition, with much of the funds never directly reaching the dissidents on the island and instead winding up funding opposition support organizations in Miami and Washington.

Meanwhile, Castro has become a model for a growing left-wing movement in Latin America, most notably in Venezuela and Bolivia.

But for Cubans, the veiled threats were immediately obvious, as Reuters reported via the BBC:

Cuba on Wednesday accused U.S. President George W. Bush of encouraging violent uprising against its communist government with a speech in which Bush urged Cubans to push for democratic change.

"You will never force us to our knees," Cuban Foreign Minister Felipe Perez Roque said in response to Bush's speech, which came 15 months after ailing leader Fidel Castro handed over power to his brother.

Bush said he would maintain sanctions against Cuba and called on Cuban military and police officers to join efforts to open Cuba to multi-party democracy, saying liberty was more important tha[n] stability.

It takes a lot of nerve to say something like that. But the president certainly doesn't lack nerve.

To see the truth in what he was saying, consider Iraq, where the Americans have provided freedom but no stability. See how well it works there? Why not do the same elsewhere?

On the other hand we can always look to Pakistan, where the US is pulling out all the stops to enforce "stability" at the cost of "liberty".

But then again, they call it "democracy", so maybe nobody will notice the difference.

Perez said that was an "invitation to violence" by Bush. "Cuba categorically rejects the stimulation of violence and the invocation of the use of force," he said at a news conference.

Bush's speech reflected frustration with his plan for "regime change" in Cuba as his presidential term nears its end, the minister said.

Perez called on the United States to stop interfering in Cuba's internal affairs and lift the U.S. trade embargo and travel restrictions, which date from the early 1960s.

He said Bush had no moral authority to demand changes in Cuba after bloodshed in Iraq.

"You are not a liberator, Mr. Bush. You are a brutal repressor. Your government has invaded, massacred and tortured in the name of liberty," Perez said.

He blamed "Bush tyranny" and not the American people for the U.S. government's hostility toward Cuba. "The day is coming when they will be free of him," he said.

We hope such a day is coming. But on the other hand it may be that we will soon be "massacred and tortured in the name of liberty" ... unless we choose to cower in our homes and wait ... for what's left of our country to be destroyed in the name of bringing "democracy" to others.