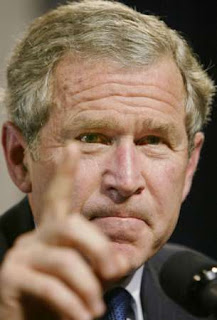 Quick, now: what do the following have in common: Turkey, Armenia, Congress, Genocide, Arms Sales, and the War in Iraq?

WASHINGTON: President George W. Bush and two top cabinet members urged lawmakers on Wednesday to reject a resolution describing the deaths of hundreds of thousands of Armenians early in the last century as genocide - a highly sensitive issue at a time of rising U.S.-Turkish tensions over northern Iraq.

"We all deeply regret the tragic suffering of the Armenian people that began in 1915," Bush said in a brief statement from the White House. "But this resolution is not the right response to these historic mass killings, and its passage would do great harm to relations with a key ally in NATO, and to the war on terror."

He spoke hours before the House Foreign Affairs Committee was to vote on the resolution. The House speaker, Representative Nancy Pelosi, is said to be prepared to forward the matter to the full House, where more than half the 435 members are co-sponsors.

Passage would be symbolic - but the symbolism, the administration asserts, could seriously jeopardize the delicate relationship with Turkey.

All eight living former secretaries of state have signed a joint letter to House Speaker Nancy Pelosi (D-Calif.) warning that the nonbinding resolution "would endanger our national security interests." Three former defense secretaries, in their own letter, said Turkey probably would cut off U.S. access to a critical air base. The government of Turkey is spending more than $300,000 a month on communications specialists and high-powered lobbyists, including former congressman Bob Livingston, to defeat the initiative.
...

The State Department, which collected the signatures of the former secretaries of state, has lobbied against the resolution, with Secretary of State Condoleezza Rice, Undersecretary of State R. Nicholas Burns, Assistant Secretary of State Daniel Fried and U.S. Ambassador Ross Wilson calling lawmakers yesterday to "urge them not to vote for this," according to an interview Fried gave the Anatolia news agency.

The Turkish Embassy is paying $100,000 a month to lobbying firm DLA Piper and $105,000 a month to the Livingston Group, and it recently added communications specialists Fleishman-Hillard for nearly $114,000 a month, according to records filed with the Justice Department. Turkish lawmakers were on Capitol Hill yesterday, warning that passage would put military cooperation with Turkey at risk.

Meanwhile, leading the charge for the resolution are grass-roots groups such as the Armenian Assembly of America, with 10,000 members, a budget of $3.6 million last year and phone banks that are running on overtime calling members of Congress.

Any possible Turkish retaliation to an Armenian "genocide" resolution that the US House of Representatives Committee on Foreign Affairs is expected to approve tomorrow is said to be likely to expand to include lucrative arms procurement deals between Turkey and the US.
...

The passage of the “genocide resolution” by the House alone (though it is not legally binding for the administration) is likely to have a serious negative impact on the Turkish public and to further affect the already damaged Turkey-US relations.

The most vulnerable areas in terms of possible Turkish retaliation are said to be limiting usage of the Habur border gate with Iraq for US goods, including oil and military spare parts, as well as limiting or even closing the İncirlik airbase in southern Turkey to US access. İncirlik has been heavily used by the US for its operations both in Iraq and in Afghanistan.

Any Turkish action to limit or close both Habur and İncirlik to US use will jeopardize US combat operations in Iraq, said an Ankara-based Western diplomat.
...

Another significant region of cooperation between Turkey and the US said to be at risk from the genocide resolution is arms procurement. Turkey was one of the leading countries in 2006 for US arms sales, totaling an estimated $2.1 billion.

Those US sales to Turkey have mostly taken place in the form of foreign military sales credits that did not involve any international tender being opened by Ankara. Turkey signed an arms deal based on foreign military sales with the US worth over $13 billion last year that involved Turkish purchase of an additional 30 F 16 fighters and Turkish participation in the US-led Joint Strike Fighter (JSF) project.

Turkey’s Undersecretariat for the Defense Industry (SSM) has in the meantime eased contract terms and conditions for the purchase of arms through international tenders -- conditions that were mainly affecting US companies due to the Turkish request for the transfer of high technology which ran contrary to US legal restrictions.

SIRNAK, Turkey -- Turkish warplanes bombed positions of suspected Kurdish rebels Wednesday, and the prime minister said preparations for parliamentary approval of a military mission against separatist fighters in Iraq were under way.

Turkish troops blocked rebel escape routes into Iraq while F-16 and F-14 warplanes and Cobra helicopters dropped bombs on possible hideouts, the Dogan news agency reported. The military had dispatched tanks to the region to support the operation against the rebel Kurdistan Workers Party, or PKK, in response to more than a week of deadly attacks in southeastern Turkey.

Turkish authorities also detained 20 suspected Kurdish rebels at a border crossing with Iraq, the office for the governor of Sirnak said in a statement.

The military activity followed attacks by PKK rebels that has killed 15 soldiers since Sunday and prompted Turkey's government to push for a possible cross-border offensive against separatist bases in Iraq. Turkish Kurd rebels have been fighting for autonomy in southeast Turkey since 1984 in a conflict that has claimed tens of thousands of lives.

Prime Minister Recep Tayyip Erdogan said Tuesday that preparations for a parliamentary authorization for a cross-border mission were under way, but didn't say when the motion would reach the floor. A member of the governing Justice and Development Party said a request for parliamentary approval for a cross-border ground offensive was unlikely to come to the floor before the end of a four-day religious holiday on Sunday.

On Wednesday, an opposition nationalist party that has long been advocating an incursion into Iraq called on the government to swiftly take the motion to parliament and said it would back it.

If Parliament approves, the military could choose to immediately launch an operation or wait to see if the United States and its allies, jolted by the Turkish action, decide to crack down on the rebels.

A cross-border operation could hurt Turkey's relationship with the U.S., which opposes Turkish intervention in northern Iraq, a region that has escaped the violence afflicting much of the rest of the country.
...

Turkish troops targeting the guerrillas suspected escape routes in mountainous areas in Sirnak province have "squeezed" a group of about 80 rebels on Mount Gabar, in Sirnak, the Hurriyet newspaper reported. Escape routes were being bombed by helicopter gunships while transport helicopters were airlifting special commando units to strategic points.

Turkish troops were also shelling suspected PKK camps in the regions of Kanimasa, Nazdur and Sinath, in northern Iraq, from positions in Turkey's Hakkari province, just across the border, Hurriyet reported. Tanks were positioned near the town of Silopi, in Sirnak province, the paper said.

The paper said the government would impose an information blackout on its preparations for a possible cross-border offensive.

So in the long run, this might be very good news:

A U.S. House committee on Wednesday defied President George W. Bush by passing a resolution calling the 1915 massacre of Armenians genocide, a step the White House warns could damage U.S. goals in the Middle East.

The measure, passed by the House Foreign Affairs Committee by a 27-21 margin, will be sent to the House floor, where Democratic leaders say there will be a vote within weeks.