It's About That Mutiny: Air Force Covers Its Tail With Transparent Feathers 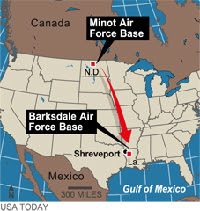 The US Air Force has decommissioned five officers and barred 65 others from handling nuclear weapons after what has been called an investigation into what has been called a series of mistakes which led to a B-52 flying from Minot Air Force Base in North Dakota to Barksdale AFB in Louisiana on August 30 while carrying nuclear-armed cruise missiles, in violation of standard practices as well as international treaty.

Staff Sgt. Monique Randolph, Secretary of the Air Force Public Affairs, spelled out the gist of the official story for Air Force Link:

A senior Air Force official released results of the command-directed investigation stemming from a weapons transfer incident that occurred Aug. 30 when cruise missiles were loaded onto a B-52 Stratofortress at Minot Air Force Base, N.D., and transported to Barksdale AFB, La.
...

"This was a serious error caused by a breakdown of procedural discipline by our Airmen," General Newton added. "We're accountable and we reassure the American people that the Air Force standards they expect are being met."

This is the same story we've been told ever since we learned of the event, ably echoed by William Arkin for the Washington Post:

Six of Our Nukes Went Missing -- But Don't Worry

Despite the huffing and puffing of the professional concerned, the danger to the good people of the United States from the B-52 crashing or a missile spontaneously exploding was probably infinitesimal. Still, the reality is that six nuclear warheads were removed from their bunkers in North Dakota, loaded onto a bomber, flown across the United States for three and a half hours, and then left on a parking apron for another 10 hours -- and no one noticed.

"The weapons were always in our custody," an Air Force spokesman assures. Of course they were in Air Force custody, at least as far as the paperwork goes. That doesn't mean a group of terrorists, aided by people on the base, couldn't have stolen the weapons from the North Dakota bunker.

There is no explanation for this incident other than gross incompetence on the part of the munitions and flight crews. 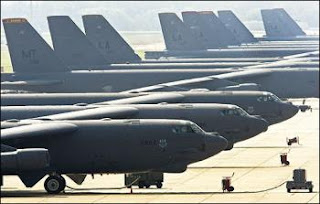 With extensive research, you will find that the removal from storage (Minot AFB) and the transport of nuclear weapons to (Barksdale AFB) involves presidential involvement. For nuclear tipped missiles to be mounted into launch position on a combat platform (B-52) the D.O.D custody regulations require a signature from the White House.

Media reports said it was a series of unfortunate "mistakes."

Research reveals the impossibility of five different two to four star generals signing off on a mistaken shipment of 50 kiloton+ stealth cruise missiles.

The "event" is one issue that has been widely discussed. The ONLY important issue that came out of the fiasco is this, The Military Times is run by Gannett. I am old so I know some big shots in the newspaper business. It is a violation of a litany of national security regulations to release a story involving "treaty regulated" transport of nuclear weapons. It is NOT done. The first publication to carry the report was the Military Times, from there it spread to the wire services. THIS IS NEVER DONE. This was a private "family matter" that would be released years from now.

A two star general responsible for the AF region got a phone call. This "general" arranged for two "unnamed" officers to "report" the incident to Gannett and we are off to the races.

Keep in mind the next step. The Military Times cannot print ANYTHING without it being vetted by an officer. Either a full colonel or a brigadier. With a review of this post you will find that no fewer than four generals were involved in the order to get the missiles mounted on the B52 and no fewer than three in ANNOUNCING the event to the world.

This is mutiny. This is brass against brass. The senior officer who vetted the story for release knew he was "covered" by still higher ups [...] The Military Times, a division of Gannett media group, was ORDERED to release the story of the B-52 Nukes. Somebody from Washington DC with many stars gave that order. Somebody with so much juice that they knew they would survive.

The cabal is not popular with the US military. I will suggest that this is hope and that hope is good. The US military are what stand between us and martial law. Every officer signs his commission with the statement to uphold the US constitution. What if most of them do?

I haven't been able to find anything in the preceding comment that appears false. 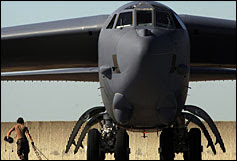 On the contrary, it makes a lot of sense to me, and it points to deeper intrigue -- the very sort of intrigue Wayne Madsen described in his piece of September 24th, "Air Force refused to fly weapons to Middle East theater":

WMR has learned from U.S. and foreign intelligence sources that the B-52 transporting six stealth AGM-129 Advanced Cruise Missiles, each armed with a W-80-1 nuclear warhead, on August 30, were destined for the Middle East via Barksdale Air Force Base in Louisiana.

However, elements of the Air Force, supported by U.S. intelligence agency personnel, successfully revealed the ultimate destination of the nuclear weapons and the mission was aborted due to internal opposition within the Air Force and U.S. Intelligence Community.

Yesterday, the Washington Post attempted to explain away the fact that America's nuclear command and control system broke down in an unprecedented manner by reporting that it was the result of "security failures at multiple levels." It is now apparent that the command and control breakdown, reported as a BENT SPEAR incident to the Secretary of Defense and White House, was not the result of a command and control chain-of-command "failures" but the result of a revolt and push back by various echelons within the Air Force and intelligence agencies against a planned U.S. attack on Iran using nuclear and conventional weapons.
...

The Washington Post story on BENT SPEAR may have actually been an effort in damage control by the Bush administration.
...

Just as this report was being prepared, Newsweek reported that Vice President Dick Cheney's recently-departed Middle East adviser, David Wurmser, told a small group of advisers some months ago that Cheney had considered asking Israel to launch a missile attack on the Iranian nuclear site at Natanz. Cheney reasoned that after an Iranian retaliatory strike, the United States would have ample reasons to launch its own massive attack on Iran. However, plans for Israel to attack Iran directly were altered to an Israeli attack on a supposed Syrian-Iranian-North Korean nuclear installation in northern Syria.

WMR has learned that a U.S. attack on Iran using nuclear and conventional weapons was scheduled to coincide with Israel's September 6 air attack on a reputed Syrian nuclear facility in Dayr az-Zwar, near the village of Tal Abyad, in northern Syria, near the Turkish border. Israel's attack, code named OPERATION ORCHARD, was to provide a reason for the U.S. to strike Iran. The neo-conservative propaganda onslaught was to cite the cooperation of the George Bush's three remaining "Axis of Evil" states -- Syria, Iran, and North Korea -- to justify a sustained Israeli attack on Syria and a massive U.S. military attack on Iran.

WMR has learned from military sources on both sides of the Atlantic that there was a definite connection between Israel's OPERATION ORCHARD and BENT SPEAR involving the B-52 that flew the six nuclear-armed cruise missiles from Minot Air Force Base in North Dakota to Barksdale. There is also a connection between these two events as the Pentagon's highly-classified PROJECT CHECKMATE, a compartmented U.S. Air Force program that has been working on an attack plan for Iran since June 2007, around the same time that Cheney was working on the joint Israeli-U.S. attack scenario on Iran.
...

Command and control breakdowns involving U.S. nuclear weapons are unprecedented, except for that fact that the U.S. military is now waging an internal war against neo-cons who are embedded in the U.S. government and military chain of command who are intent on using nuclear weapons in a pre-emptive war with Iran.

CHECKMATE and OPERATION ORCHARD would have provided the cover for a pre-emptive U.S. and Israeli attack on Iran had it not been for BENT SPEAR involving the B-52. In on the plan to launch a pre-emptive attack on Iran involving nuclear weapons were, according to our sources, Cheney, National Security Adviser Stephen Hadley; members of the CHECKMATE team at the Pentagon, who have close connections to Israeli intelligence and pro-Israeli think tanks in Washington, including the Hudson Institute; British Foreign Secretary David Miliband, a political adviser to Tony Blair prior to becoming a Member of Parliament; Israeli political leaders like Prime Minister Ehud Olmert and Likud leader Binyamin Netanyahu; and French Foreign Minister Bernard Kouchner, who did his part last week to ratchet up tensions with Iran by suggesting that war with Iran was a probability. Kouchner retracted his statement after the U.S. plans for Iran were delayed.

Although the Air Force tried to keep the B-52 nuclear incident from the media, anonymous Air Force personnel leaked the story to Military Times on September 5, the day before the Israelis attacked the alleged nuclear installation in Syria and the day planned for the simultaneous U.S. attack on Iran. The leaking of classified information on U.S. nuclear weapons disposition or movement to the media, is, itself, unprecedented.
...

The nuclear brinkmanship involving the United States and Israel and the breakdown in America's command and control systems have every major capital around the world wondering about the Bush administration's true intentions.

You can read the rest of Wayne Madsen's report here.

The Air Force forgot to mention the mysterious deaths of six airmen who were involved with the incident, as reported by the Iranian news service Press TV on September 22nd:

Six members of the US Air Force who were involved in the Minot AFB incident, have died mysteriously, an anti-Bush activist group says.
...

The activist group Citizens for Legitimate Government said the six members of the US Air Force who were directly involved as loaders or as pilots, were killed within 7 days in 'accidents'.

The victims include Airman First Class Todd Blue, 20, who died while on leave in Virginia. A statement by the military confirmed his death but did not say how he died.

In another accident, a married couple from Barksdale Air Force Base were killed in the 5100 block of Shreveport-Blanchard Highway. The two were riding a 2007 Harley-Davidson motorcycle, with the husband driving and the wife the passenger, police said.

"They were traveling behind a northbound Pontiac Aztec driven by Erica Jerry, 35, of Shreveport," the county sheriff said. "Jerry initiated a left turn into a business parking lot at the same time the man driving the motorcycle attempted to pass her van on the left in a no passing zone. They collided."

Adam Barrs, a 20-year-old airman from Minot Air Force Base was killed in a crash on the outskirts of the city.

First Lt. Weston Kissel, 28, a Minot Air Force Base bomber pilot, was killed in a motorcycle crash in Tennessee, the military officials say.

The Activist group says the mysterious deaths of the air force members could indicate to a conspiracy to cover up the truth about the Minot Air Base incident.

I'm fairly sure some of my readers know a lot more about this incident than I do. If you're one of them, don't hesitate to add to the story via the comments link.
Filed under: airstrike, Benyamin Netanyahu, intelligence, nuclear weapons
by Winter Patriot on 5:11:00 AM
Newer Post Older Post Home