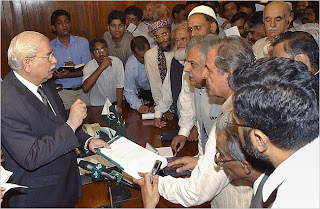 Eighty-five opposition members of the Pakistani parliament resigned on Tuesday [photo] and perhaps twice as many others were said to be resigning their seats in provincial assemblies, in protest against the coming "re-election" of President General Pervez Musharraf. An even larger bloc of opposition members are considering doing the same.

In Pakistan, the president is elected by members of the national and provincial assemblies, where Musharraf seems to have enough support to win. So yesterday's resignations (by the All Parties Democratic Movement) and those threatened (by the Pakistan Peoples Party) will not hinder Musharraf's "re-election". On the other hand, they will degrade its credibility, if possible.

As we have been documenting here recently, Musharraf's candidacy appears to violate at least three different laws:
The Supreme Court, which was expected to throw a roadblock in his way, failed to do so, and now Musharraf seems virtually guaranteed another term, especially since so much of his recent maneuvering amounts to using the power of the state to stifle dissent.

But nothing is guaranteed. Three top police officials have been suspended following Saturday's violence against lawyers and journalists, and a couple of late challenges have been filed in the Supreme Court, as Salman Masood reported in the New York Times:

Liaqut Baloch, an opposition leader, while talking to reporters outside the parliament today, said: “We think Gen. Pervez Musharraf is not acceptable to the nation with or without the military uniform.”

He appealed to the chief justice to order a stay against the presidential election.

Since mounting a military coup in 1999, General Musharraf has derived much of his power from his command of the army and has continued to conduct much of his work as president in uniform.

Even if Musharraf wins "re-election", he may still face determined opposition, as The Hindu reports:

Aitzaz Ahsan, who fought the court battle for the reinstatement of Chief Justice Iftikhar Chaudhary, said on Saturday that even if President Pervez Musharraf won another term, he would be unseated in “a matter of months” by the process of law.

“This [presidential] election will be a virtual election. He may have the arithmetic [to win it] but it will have no impact. It will not secure him. Except for the blind American and British, everyone knows this is a fraudulent election. He is a serving military officer seeking a mandate from an Assembly that is past its shelf life,” Mr. Ahsan said.

Musharraf doesn't appear to care much about legitimacy. But then he doesn't have to, because he has the Americans on his side; and he can't afford to, with his country increasingly torn between Islamic extremists and democracy advocates, both of whom would love to see the end of his rule.

Former Prime Minister Benazir Bhutto may have said it best:

"He's not prepared to give a level playing-field."