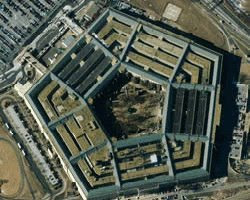 The country's worst polluter has refused to accept the legally binding orders from the agency in charge of cleaning up polluted sites. And it has happened with full approval of the White House.

The Defense Department, the nation's biggest polluter, is resisting orders from the Environmental Protection Agency to clean up Fort Meade and two other military bases where the EPA says dumped chemicals pose "imminent and substantial" dangers to public health and the environment.

The Pentagon has also declined to sign agreements required by law that cover 12 other military sites on the Superfund list of the most polluted places in the country. The contracts would spell out a remediation plan, set schedules, and allow the EPA to oversee the work and assess penalties if milestones are missed.

The actions are part of a standoff between the Pentagon and environmental regulators that has been building during the Bush administration, leaving the EPA in a legal limbo as it addresses growing concerns about contaminants on military bases that are seeping into drinking water aquifers and soil.

Under executive branch policy, the EPA will not sue the Pentagon, as it would a private polluter. Although the law gives final say to EPA Administrator Stephen L. Johnson in cleanup disputes with other federal agencies, the Pentagon refuses to recognize that provision. Military officials wrote to the Justice Department last month to challenge EPA's authority to issue the orders and asked the Office of Management and Budget to intervene.

Experts in environmental law said the Pentagon's stand is unprecedented.

But what else would one expect?

"This is stunning," said Rena Steinzor, who helped write the Superfund laws as a congressional staffer and now teaches at the University of Maryland Law School and is president of the nonprofit Center for Progressive Reform. "The idea that they would refuse to sign a final order -- that is the height of amazing nerve."

Fort Meade borders residential areas in fast-growing Anne Arundel County; Tyndall and McGuire are in less-populated regions. At all three sites, the military has released toxic chemicals -- some known to cause cancer and other serious health problems -- into the soil and groundwater.

But the EPA has been dissatisfied with the extent and progress of the Pentagon's voluntary efforts.

"Final orders" are the EPA's most potent enforcement tool. If a polluter does not comply, the agency usually can go to court to force compliance and impose fines up to $28,000 a day for each violation.

But none of tools usually used to force compliance are available this time. So sad.

Cleanup agreements drafted by the EPA for the 12 other sites contain "extensive provisions" that the Pentagon finds unacceptable, officials said.

Well let's just do whatever the Pentagon finds acceptable, then. And get it over with.
File under: EPA, Pentagon, pollution
Email ThisBlogThis!Share to TwitterShare to FacebookShare to Pinterest
Posted by Winter Patriot