Double Cover [3]: What Is A False Flag Attack? 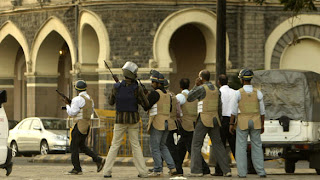 We continue our look at mainstream coverage of the Mumbai attacks:

The group that claimed to be behind last night’s attacks on Bombay -- the Deccan Mujahideen — has not hitherto been heard of in India, let alone in the outside world.

An e-mail message to Indian media outlets taking responsibility for the attacks said the militants were from a group called Deccan Mujahedeen. The word "Deccan" refers to a plateau in southern India, and "Mujahedeen" refers to holy warriors. Almost universally, analysts and intelligence officials said that name was unknown.

Deccan is a neighborhood of the Indian city of Hyderabad. The word also describes the middle and south of India, which is dominated by the Deccan Plateau. But the combination of the two words, said Gohel, is a "front name. This group is nonexistent."

"It's even unclear whether it's a real group or not," said Bruce Hoffman, a professor at the School of Foreign Service at Georgetown University and the author of the book "Inside Terrorism."

A group calling itself the Deccan Mujahedeen said it had carried out the attacks. It was not known who the group is or whether the claim was real.

the Indian media, citing unidentified police investigators, reported on Friday that three alleged attackers had confessed to being members of Lashkar-e-Taiba, a Pakistan-based group which aims to end Indian rule in Kashmir.

Lashkar-e-Taiba, which means army of God, had earlier denied any role in the attacks.

The Hindu newspaper said interrogation of the suspects revealed that Lashkar operatives had left Karachi in Pakistan in a merchant ship early on Wednesday and went ashore at Mumbai on a small boat before splitting up into teams to attack multiple locations.

The Indian navy, stepping up patrols on the country's western coast after the attack, was questioning the crew of the MV Alpha, a ship they detained with the help of the Indian coast guard, British authorities said. The authorities said they believe the attacks originated from this ship, which they believe is from Karachi, Pakistan.

The British authorities also said three speedboats -- carrying weapons and militants -- traveled along the Indian coast from the ship to Mumbai and launched the attack.

However, Karachi police said have no evidence the attackers departed from their city, Waseem Ahmad, the police chief, said.

All Signs Point To Al Qaeda

The multiple attacks on Westerners in Bombay last night showed all the signs of an al-Qaeda strategy — picking on vulnerable Western “soft targets” but not in a country where there would be maximum security.

Michael Evans of the UK Times:

Bombay has been targeted before when 180 people died during a bomb attack on the railway station in 2006, but that incident was put down to militants, not al-Qaeda, and the Indian government suspected that the attackers had links to Pakistan’s intelligence service, the ISI.

This attack, however, involving the taking of Western hostages made it more likely that the operation’s masterminds were from the core leadership of al-Qaeda, which is based in the lawless tribal regions close to the Pakistan/Afghanistan border.

[A] British security official told the AP on condition of anonymity that the attack doesn't look to have been directed by al-Qaida's core leadership, which has been weakened by the deaths of several leaders and key operatives in recent months.

Al-Qaida's core leadership is believed to be fewer than 100 people now, said Rohan Gunaratna, author of "Inside Al-Qaida" and a terrorism expert at the International Center for Political Violence and Terrorism Research in Singapore.

Christine Fair, senior political scientist and a South Asia expert at the RAND Corporation, was careful to say that the identity of the terrorists could not yet be known. But she insisted the style of the attacks and the targets in Mumbai suggested the militants were likely to be Indian Muslims and not linked to Al Qaeda or Lashkar-e-Taiba, another violent South Asian terrorist group.

"There's absolutely nothing Al Qaeda-like about it," she said of the attack. "Did you see any suicide bombers? And there are no fingerprints of Lashkar. They don't do hostage-taking and they don't do grenades."

Keith Bradsher and Somini Sengupta for the International Herald Tribune:

The suspicions raised by the attack seemed a blow to relations between India and Pakistan, which had been recovering from a low earlier this year after India blamed the Pakistani intelligence agency for abetting the bombing of the Indian Embassy in Afghanistan.

A CNN report said the attacks came just after Asif Ali Zardari, the new Pakistani president, went farther than any of his predecessors in expressing a desire for better ties with India. Zardari was quoted as saying he would even like to see the two nuclear powers jointly fight terrorism.

"We condemn these attacks and the loss of innocent life," White House spokesman Tony Fratto said.

The Israeli defense establishment Thursday avoided stating explicitly if the attack on Chabad House in Mumbai was planned or coincidental. One scenario raised was that the terrorists arrived there randomly while fleeing after an exchange of gunfire with Mumbai police. It is also possible that Chabad was targeted as part of an attack in which hotels were "marked" as points for the abduction and murder of Western tourists, centrally American and British citizens.

Israeli forces were believed to be involved in the rescue attempt at the Jewish centre. "The Israelis are the ones who are running the show," one diplomatic source told AFP.

Israel sent a number of intelligence officers to India Thursday to assist in analyzing the major terrorist attack on Mumbai.

It appears the Indian government is not interested in high profile security assistance from Israel. Throughout the day, the Homefront Command prepared to send an aid delegation to India, but efforts were halted when it became clear that Mumbai was not enthusiastic about the prospect.

A police source [...] suggested that the attack could have been revenge for the killing of Rashid Rauf, a British Al Qaeda chief blown up by the US last week.

That's a good one. I'd take that bet!

This carefully planned and coordinated assault could have been revenge for an alleged killing that happened (if it did happen) just four days earlier.