Obama's Promise: Change You Can Wait For! 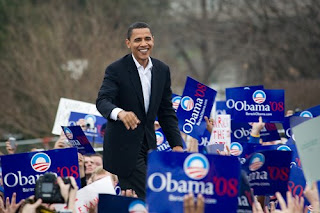 Barack Obama, the most "transformative figure" who has floated to the top of our national cesspool in more than two generations, continues to show his hand, and it is not attractive -- or surprising.

The support it's been getting from the donkey party insiders is even less attractive, and less surprising. None of this is a surprise at all, except, apparently, to the vast majority of the allegedly dissident political bloggers of the supposedly angry somewhat left, who have a rude awakening ahead of them (if they ever wake up at all).

In other words, the bells of change are tolling, but they aren't tolling for you.

They're tolling against you.

As the AP reported via the IHT:

John Podesta, who's handling Obama's preparations to take over in the White House on Jan. 20, said on Sunday that Obama ... was working to build a diverse Cabinet likely to include Republicans and independents — part of the broad coalition that supported Obama during the race against Republican John McCain.

Defense Secretary Robert Gates has been mentioned as a possible holdover.

"He's not even a Republican," Senate Majority Leader Harry Reid of Nevada said on CNN. "Why wouldn't we want to keep him? He's never been a registered Republican."

Who cares if Bob Gates is the leader of the world's biggest gang of war criminals? Not Barack Obama, clearly. And not Harry Reid, either.

"Why wouldn't we want to keep him? He's never been a registered Republican."

If that's the criterion, we're in for some fun, aren't we?

Obama had already shown his intentions, as if they weren't clear enough, by selecting Rahm Emanuel as his Chief of Staff.

Emanuel's recent background has been summarized as follows:

Emanuel was a political and policy aide in Bill Clinton's White House. Leaving that, he turned to investment banking, then won a Chicago-area House seat six years ago. In Congress, he moved quickly into the leadership. As chairman of the Democratic campaign committee in 2006, he played an instrumental role in restoring his party to power after 12 years in the minority.

But then again, this summary comes from FOX, and as usual it neglects to tell you something important. In his role as chairman of the Democratic campaign committee in 2006, Rahm Emanuel made sure that no Democratic congressional candidate received any support at all unless he (or she) toed certain very clear lines.

Thus were progressive candidates such as Clint Curtis and Robert Bowman hung out to dry: Curtis because he knows our elections are rigged and Bowman because he knows that 9/11 was an inside job.

Cynthia McKinney, who dared to support both the quest for verifiable elections and the quest for verifiable truth about 9/11, was thereby deemed overly critical of Israel, and her primary opponent suddenly received huge financial and logistical support from Jewish and Israeli groups. McKinney, who had introduced the first articles of impeachment against the Bush administration, was then portrayed as an anti-Semite in the national media, and duly weeded out, long before the general election began.

Without these acts of sabotage, and without similar self-destructive tactics, the Democrats would have had an even larger majority.

In other words, Rahm Emanuel knows what he's doing.

And so does Barack Obama.

By appointing as his Chief of Staff a foul-mouthed, quick-tempered Zionist who stands against both electoral integrity and 9/11 truth, Obama has marked the Oval Office off-limits to anyone who might be able to nudge our government toward accountability or our foreign policy in a positive direction. And as we must surely have realized by now, post-9/11 foreign policy as presently constituted has broken the bank in such a way that domestic policy is now so undernourished, it's virtually meaningless.

In other words, if we've got the GWOT, we've got nothing else. And that doesn't even begin to measure the horrific impacts of the GWOT on the rest of the world -- which is, after all, where the GWOT's primary victims once lived.

Obama's appointment of Emanuel guarantees that the GWOT will remain -- not only in play but also in power -- unchallenged except by a few madmen of the internet, for at least the next four (read: eight) years.

For their part, the Republicans are back to their most basic trick: while Emanuel is positioning himself to protect what they have done in the past eight years, they portray him as their opponent, and attack him pre-emptively. Thus, according to the same piece from FOX News,

Last week, the Republican National Committee put out a press release calling Obama's choice of Emanuel, "Obama's Broken Promise" because the Illinois politician has a reputation for being "hyper-partisan."

And Republican House leader John Boehner called Emanuel "an ironic choice for a president-elect who has promised to change Washington, make politics more civil, and govern from the center."

The notion of "governing from the center" is a mis-nomer, of course, and a deliberate one, if ever a deliberate lie was told in American politics.

When Republican politicians and pundits say Obama should govern from "the center", they mean "as close to the radical-right post-9/11 agenda as possible".

And when Obama's Chief of Staff moves in that direction, what is that but Change You Can Wait For?

Emanuel responded to the GOP's criticisms, saying, "President-elect Obama is very clear... that we have to govern in a bipartisan fashion."

"The challenges are big enough that there's going to be an ability for people of both parties, as well as independents, to contribute ideas to help meet the challenges on health care, energy, tax reform, education," he said.

Notice the issues that Rahm Emanuel lists as challenges. Do you see anything about foreign policy? Do you see any hint of the War on Terror, or the War on Drugs, or the gathering War on Pakistan, or the proxy war on Somalia, or the constant threats of War on Iran? Of course not. These are all approved by the radical right that calls itself "the center".

And Obama has made it crystal clear -- to all 17 of us who were listening -- that his main disagreement with the Bush administration is over Iraq, where we're losing and where we're wasting forces that could be more valuable in Afghanistan.

He's a Prince, all right! A Prince of Peace! Peace You Can Wait For!

How long must you wait? How much more can you take?

Wait as long as you can; wait as long as you will. Peace won't come during this snake's administration, nor -- if he gets his way -- during your lifetime. But Barack Obama and his backers would be very happy if you decided to sit and wait.

Should you decide to dance and sing, weep with joy or fall over in ecstasy, that would be ok too, of course.

In chess, a common tactic involves pinning a piece (fixing it to single square) and then capturing it (which is so much easier when it can't run away). In politics, things are almost as complicated. But instead of knights and bishops we have pied pipers, who create "dissident" personality cults which attract fiercely loyal supporters, who are then immobilized and captured in due course.

The difference, of course, is that in chess the pieces are all wooden and insensate, whereas in politics only some of them are. And therefore, some people may eventually start to believe that Barack Obama has compromised, or even betrayed, his principles.

But that's not true; they only believe it because they haven't been paying attention for long enough. Barack Obama has made it very clear, many times, that he has no principles.

Fortunately for Obama, his chief opponents, both in the donkey primary and in the general selection, had already made it even clearer that they were even more stupid, even more beholden, and/or even more ruthless. 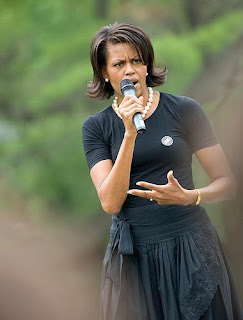 But Obama, far from stupid, is probably the most dangerous of the bunch. And -- guess what? -- he's already convinced the world to let down its guard, while he's planning another huge increase in American military funding. For what, pray tell? Oh, I suppose you can guess ...

What were we talking about?

Nothing matters very much, now that we've elected a transformative figure.

And isn't his wife beautiful? This is gonna be so much fun!