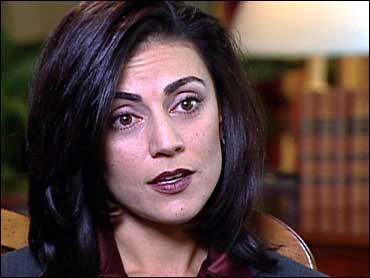 Sibel Edmonds is the most gagged person in US history. The government has repeatedly invoked the State Secrets Privilege in her case - not for reasons of "national security" but to hide ongoing criminal activity.

Thus writes Luke Ryland, the Tasmanian journalist who has done more than anyone to keep us up to date on developments in the Sibel Edmonds story. Ms. Edmonds, as you may know, is a former FBI Language Specialist who joined the Bureau shortly after 9/11 in an attempt to use her considerable skills to enhance our National Security.

The FBI quickly learned that Sibel was more interested in National Security than "going along with the program", and they got rid of her as soon as they found out that they couldn't shut her up.

She's been trying to enhance our National Security ever since.

The things Sibel Edmonds saw, and the documents she translated, in her few months with the FBI are enough to make your head spin. It's all so incredible! And yet, according to one expert after another, every word is true!

As if her story hadn't been sufficiently confirmed, a document released Monday -- a report written by a former FBI Special Agent (for whom Ms. Edmonds once worked) -- lends even more support to her accusations.

What exactly is her story? That's what we don't exactly know. We do know that it involves Turkey, heroin smuggling, money laundering, illegal weapons trafficking, terrorism, and corruption of US government officials.

We know that Sibel Edmonds is gagged -- according to a so-called State Secrets Privilege -- and that her formerly public testimony has been retroactively classified -- because otherwise the information she revealed would jepoardize important business ties and sensitive diplomatic relations!

Did you read that right? I think you did. Sibel Edmonds' public testimony has been retroactively classified -- as if that made any sense! -- because the information is damaging ... but to what?

Why can't we find out all there is to find out -- about Turkey, about terrorism, about 9/11 and all the circumstances surrounding it!! -- and then decide for ourselves which business ties and which diplomatic relations deserve to be damaged?

How can we hope to protect ourselves against "another 9/11" if we don't even understand what caused the "first" one?

9/11 is far from the only issue here. Sibel Edmonds' story is not exclusively -- or even mainly -- about 9/11. It's about the environment: the severely compromised "National Security" environment within which 9/11 happened.

I don't believe Sibel Edmonds needs any more corroboration. The fact that she's been gagged shows how dangerous she is. If she were a nutcase telling a fruitcake tale, they'd let her speak and then they would ridicule her. This ain't that, as they say.

How do you know who to believe? When do you decide whether or not to believe somebody? I think it's different for everybody. One size certainly does not fit all. Personally, I've thought she sounded credible ever since I first heard of her, but I became firmly convinced that she must be telling trying to tell us the truth -- and a very dangerous truth at that -- in the spring of 2005, when I learned about her hearing at the U.S. Court of Appeals, from which she was evicted!

That's right. Sibel Edmonds and her attorneys were evicted from the courtroom -- and guards were placed at the doorway so they couldn't even listen in! -- as the judge conferred with attorneys representing the federal government. When they finally opened the doors again, the judge had a ruling: case dismissed!

Under the terms of her state secrets gag order, Ms. Edmonds cannot speak freely, but she has been quite artful in speaking less-than-freely. There've been games of will-you-deny-this? disguised as interviews; there have been all kinds of things.

Among recent things, one of the most excellent has been a short article in the American Conservative. According to Ms. Edmonds, this piece, by Philip Giraldi, is 100% accurate: (space and emphasis added)

Sibel Edmonds, the Turkish FBI translator turned whistleblower who has been subjected to a gag order could provide a major insight into how neoconservatives distort US foreign policy and enrich themselves at the same time.

On one level, her story appears straightforward: several Turkish lobbying groups allegedly bribed congressmen to support policies favourable to Ankara. But beyond that, the Edmonds revelations become more serpentine and appear to involve AIPAC, Israel and a number of leading neoconservatives who have profited from the Turkish connection.

Israel has long cultivated a close relationship with Turkey since Ankara's neighbours and historic enemies -- Iran, Syria and Iraq -- are also hostile to Tel Aviv. Islamic Turkey has also had considerable symbolic value for Israel, demonstrating that hostility to Muslim neighbours is not a sine qua non for the Jewish state.

Turkey benefits from the relationship by securing general benevolence and increased aid from the US Congress -- as well as access to otherwise unattainable military technology. The Turkish General Staff has a particular interest because much of the military spending is channeled through companies in which the generals have a financial stake, making for a very cozy and comfortable business arrangement.

The commercial interest has also fostered close political ties, with the American Turkish Council, American Turkish Cultural Alliance and the Assembly of Turkish American Associations all developing warm relationships with AIPAC and other Jewish and Israel advocacy groups throughout the US.

Someone has to be in the middle to keep the happy affair going, so enter the neocons, intent on securing Israel against all comers and also keen to turn a dollar. In fact the neocons seem to have a deep and abiding interest in Turkey, which, under other circumstances, might be difficult to explain.

The money involved does not appear to come from the Turkish government, and FBI investigators are trying to determine its source and how it is distributed. Some of it may come from criminal activity, possibly drug trafficking, but much more might come from arms dealing. Contracts in the hundreds of millions, or even billions of dollars provide considerable fat for those well placed to benefit.

Investigators are also looking at Israel's particular expertise in the illegal sale of US military technology to countries like China and India. Fraudulent end-user certificates produced by Defense Ministries in Israel and Turkey are all that is needed to divert military technology to other, less benign, consumers.

The military-industrial-complex/neocon network is also well attested. Doug Feith has been associated with Northrup Grumman for years, while defense contractors fund many neocon-linked think tanks and "information" services. Feith, Perle and a number of other neocons have long had beneficial relationships with various Israeli defense contractors.

Quite a witch's brew going on there, isn't it?

I want to know more about all of these things.

I am told we are talking about the sale of restricted nuclear weapons technology on the international black market. I want to know more about that.

If you would like to know more about all these things, I may have some good news for you. Finally, finally!, there may be something we can do about it.

The Democrats supposedly control both houses of Congress. They definitely control the House of Representatives. They won't talk about impeachment but they will talk about oversight. This is a case demanding oversight, if ever there was one.

A coalition representing Americans on both sides of the political divide has presented a petition to the House Committee on Oversight and Government Reform, asking for open public hearings in this case and asking Congress to re-examine the so-called State Secrets Privilege. The key individuals on this committee are Henry Waxman and John Conyers.

Please do it soon: This week! Today!! Right now!!!

And please enjoy this very short clip -- from the speech Ms. Edmonds gave when she accepted the 2006 PEN Award.

Miguel at Kill The Messenger:
The Incredibly, Credible Sibel