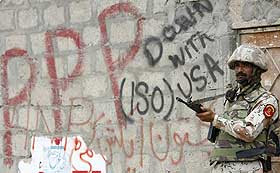 ISLAMABAD, May 14: A sense of anger and grief was more than evident on the streets across the country on Monday, as most businesses and shops from Khyber to Karachi remained closed. In many cities and towns, public transport remained off the road, bringing normal life to a halt on what was supposed to be the first working day of the week.

The strike was observed on a call given by the combined opposition in protest against mayhem in Karachi on Saturday when hundreds of armed men took control of the streets and Chief Justice Iftikhar Mohammed Chaudhry and his lawyers were prevented from leaving the airport to attend a bar association function in downtown Karachi.

The nationwide shutdown was on a scale not seen for many years. So widespread and effective was the response to the opposition’s call that even traders in Islamabad, who ignored such pleas in the past, kept their businesses shut throughout the day. The shutdown in adjoining Rawalpindi was more comprehensive, with even smaller bazaars remaining closed.

Reeling under the after-effects of Saturday’s bloodbath, Karachi also observed a complete strike and witnessed more bloodshed when another four people were killed, taking the death toll in the ongoing violence to 46.

Two of those killed, reportedly belonging to Pakistan People’s Party, were gunned down when a contingent of Rangers, who have been empowered to shoot on sight anyone involved in rioting, opened fire to disperse protesters in the Lyari area.

Residents said a large number of people had taken to the street in protest when a police contingent forced shopkeepers to pull up their shutters. They said a Rangers’ party reached the area and opened fire on the protesters.

However, a Rangers spokesman categorically denied involvement of their personnel and attributed the killings to the Lyari gang war.

All commercial and shopping centres, markets, showrooms and shops were closed and public transport remained off the roads. The entire city wore a deserted look throughout the day.

Aljazeera, May 15:
Pakistan cracks down on riot threat

Strike action by opposition groups has virtually shut down major cities across Pakistan, as the row over the suspension of Iftikhar Chaudhry, Pakistan's chief justice continues.

The strikes on Monday come as the Supreme Court in Islamabad suspended a hearing into the charges against Chaudhry after one of the judges refused to hear the case.

"The city [Karachi] is totally paralysed. Shops are closed and very little public transport is on the roads. People are scared," Azhar Farooqi, a Karachi police chief, said. 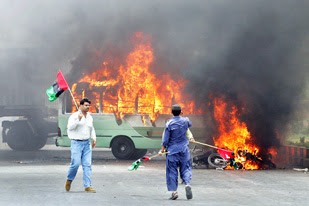 Pakistan's government has ordered the country's security forces to shoot rioters if necessary to bring an end to political violence that has left at least 37 people dead in Karachi in the last two days.

The order came as sporadic clashes continued around Pakistan on Sunday, a day after the worst street violence since the 1980s.

Unrest broke out in several ethnic Pashtun-dominated areas of the city, and "unknown people" fatally shot a man identified as Saifur Rehman, according to Shad Masih, a police officer. He said police dispersed a crowd in the area using tear gas.

"We have increased the presence of Rangers in the city and have told them to arrest or shoot anyone involved in violence and riots threatening life or property," Syed Kamal Shah, the interior secretary told Reuters, referring to a paramilitary force.

"The events of yesterday were very serious and violent. The whole city was paralysed and many precious lives lost...We don't want a repeat."

The death toll from the political violence in Pakistan has risen to 36 after hospitals received more bodies.

The violence came after a political crisis threatening General Pervez Musharraf, the president, exploded into clashes on Saturday between pro-government armed men and opposition activists in Karachi.

Karachi was largely peaceful early on Sunday but a group of about 100 people had blocked a street with burning tyres and stones in Jamshed Quarters neighbourhood, an Associated Press report said.

The death toll rose to 34 from the initial 28 after more dead bodies arrived in four Karachi hospitals and a police officer was killed by a mob late on Saturday, police and hospital officials said.

Most of the victims were members of opposition parties supporting Iftikhar Chaudhry, the chief justice suspended on March 9 by Gen Musharraf. 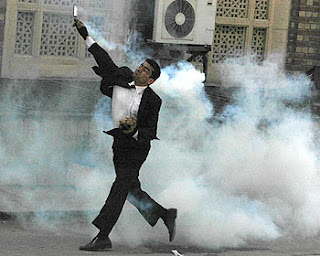 What is all this about?

As your cold scribe has reported (here and here), General-President Pervez Musharraf faces a re-election challenge soon, and the former Chief Justice, Iftikhar Chaudhry, was expected to enforce the law that says only civilians can run for president.

So Musharraf would have had to give up his commission to run again, or give up the presidency to remain a General, or declare martial law and cancel the election, or maybe he thought he saw another way to stay in power: by firing the Chief Justice.

But Pakistan's lawyers didn't buy it, and they got out in the streets (in their business suits!), and the instability in Pakistan -- already torn apart by Musharraf's post-9/11 alliance with the USA against their friends and neighbors, the Taliban -- has been gathering momentum ever since.

So now we have: an unstable government, including an admitted terrorist as secretary of defense, in massive crisis over executive interference in the judicial system (against a background of attempted election fraud!) in a country that's virtually ruled by its army; a rogue intelligence agency with major terrorist connections; and angry, grief-stricken people who are sick to death of the so-called "War on Terror" and responding to calls for a general strike.