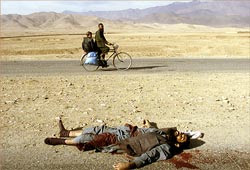 When you're busy exporting "democracy", this sort of thing happens from time to time.

KABUL, Aug 22 (AFP) - An operation by international forces in western Afghanistan Friday killed 76 civilians, most of them women and children, the Afghan interior ministry said, announcing it had opened an investigation into the incident.

Military spokesmen call it "collateral damage", which is sufficiently vague to cover all manner of atrocities. And I use the word "cover" advisedly.

Since the dead people were not legitimate military targets, it would have been a war crime to obliterate them on purpose. So the word "collateral" -- literally: "off to the side" -- in this instance is probably supposed to mean "unintended". And the implication is meant to be, "Oops!" In other words, that's how they keep the killers out of prison. 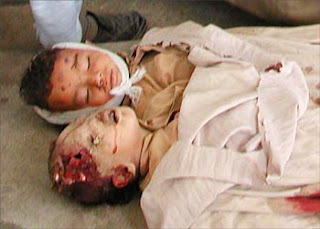 On the other hand, "collateral" can also mean "off to the side" as in "subordinate" or "meaningless". So when we hear the deaths of innocent foreigners described as "collateral damage", the message is effectively, "It doesn't matter; get used to it". In other words, "... or you could be next!"

But when the citizens of an occupied country strike against the occupying foreigners, that's called "terrorism".

“In its struggle against terrorism, France has just been hard hit,” Mr. Sarkozy said in a statement. He arrived in Kabul on Wednesday, according to Reuters, a trip he made to reassure French troops that “France is at their side.”

But Mr. Sarkozy said France would not be deterred from its Afghan mission, where 3,000 troops are serving in a NATO force of more than 40,000 soldiers from nearly 40 nations.

“My determination is intact,” he said. “France is committed to pursuing the struggle against terrorism, for democracy and for freedom. This is a just cause; it is an honor for France and for its army to defend it.”

Barack Obama wants to end the war in Iraq, as he explained in the New York Times last month, in a piece called "My Plan for Iraq". 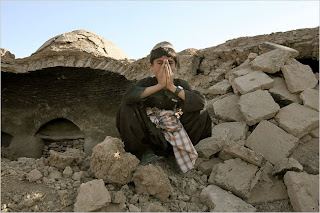 He wants to do this by moving the war to Afghanistan. And for once he's speaking clearly about it:

I believed it was a grave mistake to allow ourselves to be distracted from the fight against Al Qaeda and the Taliban by invading a country that posed no imminent threat and had nothing to do with the 9/11 attacks. Since then, more than 4,000 Americans have died and we have spent nearly $1 trillion. Our military is overstretched. Nearly every threat we face — from Afghanistan to Al Qaeda to Iran — has grown.
...

Ending the war [in Iraq] is essential to meeting our broader strategic goals, starting in Afghanistan and Pakistan, where the Taliban is resurgent and Al Qaeda has a safe haven. Iraq is not the central front in the war on terrorism, and it never has been. As Adm. Mike Mullen, the chairman of the Joint Chiefs of Staff, recently pointed out, we won’t have sufficient resources to finish the job in Afghanistan until we reduce our commitment to Iraq.

As president, I would pursue a new strategy, and begin by providing at least two additional combat brigades to support our effort in Afghanistan. We need more troops, more helicopters ...

... and more collateral damage, too.

Let me tell you, brother,
You can't have one without the other! 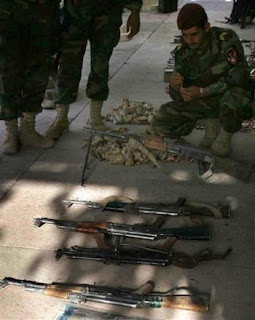 UPDATE: The Americans are denying everything, of course. According to the AP, they say they killed 30 militants -- and no civilians.

And according to The Independent, the coalition of the killing can't get their story straight:

the coalition denied killing civilians. It said 30 militants had been killed ...

A spokesman for the defence ministry in Kabul said US special forces and Afghan troops had struck against a commander named Mullah Sidiq. "Twenty-five Taliban were killed, including Sidiq and another commander," said a spokesman General Zaher Azimi. "Five civilians were killed."

But a statement from the Interior Ministry told a different tale:

"Seventy-six civilians, most of them women and children, were martyred today in a coalition forces operation in Herat province," the statement said.

Coalition forces bombarded the Azizabad area of Shindand district in Herat province on Friday afternoon, the ministry said. Nineteen victims were women, seven were men, and the rest were children under 15, it said.

The AP ran a photo [republished here] which purports to show the arms and ammunition recovered from the scene after the "30 militants" were killed. Count the rifles: one, two, three, four, five. This in a country where virtually every adult male carries a Kalashnikov. An impressive haul, indeed.

Given the track records of the parties involved, I'm not thinking about changing my headline.